Libraries in German-speaking countries. Home Page - Deutsche Digitale Bibliothek. Germany. German Auxiliary Units at Yorktown - Yorktown Battlefield Part of Colonial National Historical Park. The Germany of the 1700's was not a unified country like it is today. 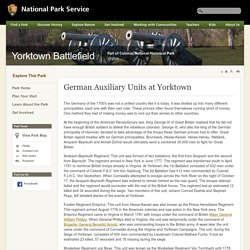 It was divided up into many different principalities, each one with their own ruler. These princes often found themsleves running short of money. One method they had of making money was to rent out their armies to other countries. At the beginning of the American Revolutionary war, King George III of Great Britain realized that he did not have enough British soldiers to defeat the rebellious colonists. George III, who also the king of the German principality of Hanover, decided to take advantage of the troops these German princes had to offer. Deutschland. Ein Wintermärchen : Heinrich Heine. 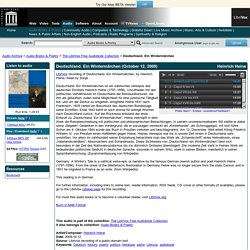 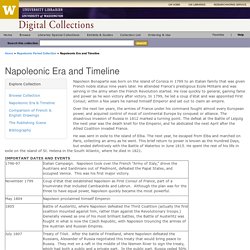 He was named King of Naples and later King of Spain by Napoleon after those countries were conquered. Joséphine de Beauharnais: First wife of Napoleon, and Empress of France. When she and Napoleon failed to have children, she agreed to a divorce. She was previously married to Alexandre, vicomte de Beauharnais, with whom she had a daughter, Hortense, whose son Charles Louis Napoleon became Napoleon III during the Second Empire. Marie Louise, archduchess of Austria, second wife of Napoleon and mother of his son, Napoleon Francois Joseph Charles Bonaparte. Staatsbibliothek zu Berlin. H-German. History of Germany: Primary Documents.

Chronicling America's Historic German Newspapers and the Growth of the American Ethnic Press. This article is the first in a series about the history of the ethnic and foreign language content of “Chronicling America,” a database of historic American newspapers from 1836 to 1922 supported by NEH and the Library of Congress. 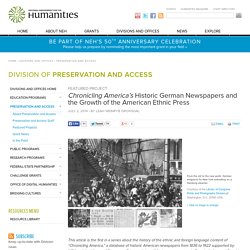 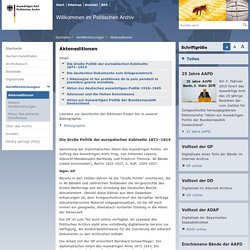 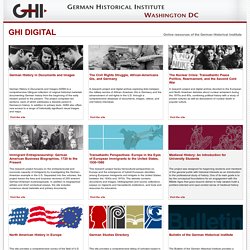 The project comprises ten sections, each of which addresses a discrete period in Germany's history. In addition to primary texts, GHDI also offers new access to a range of historically significant visual images and maps. The Western Tradition. Encyclopedia of 1848 Revolutions. History of Germany, from Unification to Reunification (HI136) Tutor: Dr Anna Hájková Email: Anna.Hajkova@warwick.ac.uk Office: H325 Lectures: Tuesday, 11am in R1.15 Seminars: Tuesday, 1-2 in H1.03 and 2-3 in H3.56 In this second-year undergraduate module, students will examine the history of Germany from the bourgeois revolutions of the mid-19th century to German reunification at the end of the 20th century. 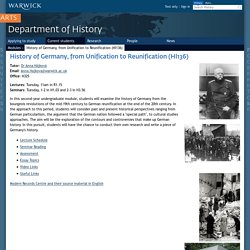 In the approach to this period, students will consider past and present historical perspectives ranging from German particularlism, the argument that the German nation followed a "special path", to cultural studies approaches. Internet History Sourcebooks. We had to avoid wounding Austria too severely; we had to avoid leaving behind in her any unnecessary bitterness of feeling or desire for revenge; we ought rather to reserve the possibility of becoming friends again with our adversary of the moment, and in any case to regard the Austrian state as a piece on the European chessboard. 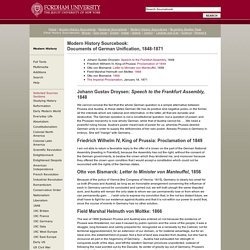 If Austria were severely injured, she would become the ally of France and of every other opponent of ours; she would even sacrifice her anti-Russian interests for the sake of revenge on Prussia. . . .The acquisition of provinces like Austria Silesia and portions of Bohemia could not strengthen the Prussian state; it would not lead to an amalgamation of German Austria with Prussia, and Vienna could not be governed from Berlin as a mere dependency. . . .Austria's conflict and rivalry with us was no more culpable than ours with her; our task was the establishment or foundation of German national unity under the leadership of the King of Prussia. Die grosse politik der europäischen kabinette, 1871-1914 : Sammlung der diplomatischen akten des Auswärtigen amtes, im auftrage des Auswärtigen amtes : Germany. Auswärtiges Amt.

Letters on International Relations Before and During the War of 1870 : Karl] [Abel. Skip to main content Search the history of over 485 billion pages on the Internet. 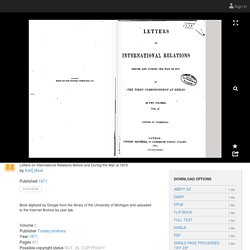 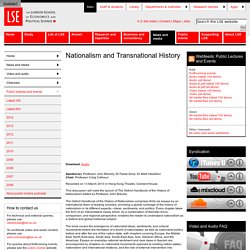 German South-West Africa, or present-day Namibia, was a colony of the German Empire from 1884 until 1915, when it was occupied by South African forces fighting on the side of Great Britain in World War I. The brief history of the colony was marked by a series of insurrections by the Khoekhoe and Hereros against German rule, insurrections that the authorities suppressed with extraordinary harshness. The German ambition was to populate the colony with large numbers of settlers from Germany, much as the British had done in other parts of Africa. By 1914 more than 9,000 German settlers were living in the colony, but the dry climate and lack of water was a limiting factor on further settlement and expansion. Theodor Rehbock was a noted German hydraulic engineer who was asked by a local syndicate to study the colony’s water resources and their potential use in irrigation projects. Politics and the First World War. 17 March 2015 Politics and the First World War Professor Sir Richard Evans FBA ‘War’, as the great Prussian military theorist Carl von Clausewitz famously observed, ‘is the continuation of politics by other means’.

It was in his view an instrument of policy, to be used to achieve specific aims and purposes. Discussion Events Leading World War. 1914-1918-online: Homepage. The Zimmermann Telegram. Background Between 1914 and the spring of 1917, the European nations engaged in a conflict that became known as World War I. While armies moved across the face of Europe, the United States remained neutral. In 1916 Woodrow Wilson was elected President for a second term, largely because of the slogan "He kept us out of war. " Events in early 1917 would change that hope.

In frustration over the effective British naval blockade, in February Germany broke its pledge to limit submarine warfare. In January of 1917, British cryptographers deciphered a telegram from German Foreign Minister Arthur Zimmermann to the German Minister to Mexico, von Eckhardt, offering United States territory to Mexico in return for joining the German cause. The story of British intelligence efforts to decipher the German code is fascinating and complicated. The Economic Consequences of the Peace : John Maynard Keynes. LibriVox recording of The Economic Consequences of the Peace by John Maynard Keynes. Read by Graham McMillan. A Nation of Provincials. Hollywood in Berlin. History - World War One Centenary - WW1 1914-1918.

Telegram sent by Hermann Goering to Adolf Hitler asking if he could be leader sells for £35k. NCAP. Demystifying the German Armament Miracle During World War Ii: New Insights from the Annual Audits of German Aircraft Producers by Jochen Streb, Jonas Scherner, Lutz Budrass. Jochen Streb. Memorial Book - Victims of the Persecution of Jews under the National Socialist Tyranny in Germany 1933 - 1945. Nazi Concentration Camps. Nazi Germany and the Holocaust. United States Holocaust Memorial Museum. Memory of the Camps. A personalized PBS video experience is only a few clicks away. Use one of the services below to sign-in to PBS, and you'll be able to manage videos in your Watchlist, keep track of your favorite shows, watch PBS in high definition, and much more!

WNMU-TV. Nuremberg Trials. THE U.S. ARMY IN THE OCCUPATION OF GERMANY. Cornell Law Library Donovan Nuremberg Trials Collection. Cornell Law Library - Nuremberg Trials Collection: The Donovan Archive Index. Atina Grossmann: Regarding Eric Lichtblau’s News Analysis, “Surviving the Nazis, Only to be Jailed by America” How Thousands Of Nazis Were 'Rewarded' With Life In The U.S. BBC Radio 4 Programmes - Things We Forgot to Remember, Series 8, Episode 2. Podcasts and Downloads - Germany: Memories of a Nation.