Religion. Mental Illness. Writing. ‪House of Numbers Prompts Lively Discourse Among Viewers‬‏ Living Without HIV Drugs. I was diagnosed HIV + in June 1996, after the birth of my second child. 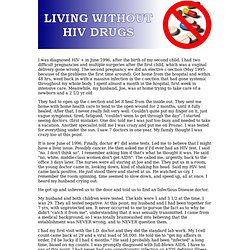 I had two difficult pregnancies and multiple surgeries after the first child, which was a vaginal delivery gone wrong. The second pregnancy we did an elective c-section (May 1995- because of the problems the first time around). Got home from the hospital and within 48 hrs, went back in with a massive infection in the c-section that had gone systemic throughout my whole body. I spent almost a month in the hospital, first week in intensive care. Meanwhile, my husband, Joe, was at home trying to take care of a newborn and a 2 1/2 yr old. They had to open up the c-section and let it heal from the inside out. It is now June of 1996. He got up and ushered us to the door and told us to find an Infectious Disease doctor. My husband and both children were tested. I had my first visit with the I.D. doctor and they did the standard lab work.

I was never in a considered risk group. Fast forward, April 2007. I am an overcomer! 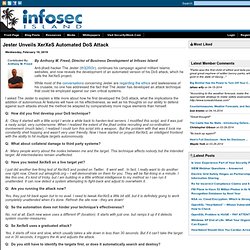 Freed, Director of Business Development at Infosec Island Anti-jihadi hacker The Jester (th3j35t3r), continues his campaign against militant Islamic websites, and now reveals the development of an automated version of his DoS attack, which he calls the XerXeS project. While most of the conversations concerning Jester are regarding the ethics and lawlessness of his crusade, no one has addressed the fact that The Jester has developed an attack technique that could be employed against our own critical systems. I asked The Jester to explain a little more about how he first developed the DoS attack, what the implications the addition of autonomous AI features will have on his effectiveness, as well as his thoughts on our ability to defend against such attacks should the method be adapted by comparatively more rogue elements than himself. Q: How did you first develop your DoS technique? A: Okay it started with a little script I wrote a while back to harden-test servers. 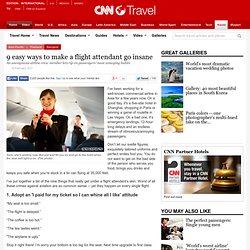 But just wait till you try and go to the toilet when the seat belt light is on. (File photo)I’ve been working for a well-known commercial airline in Asia for a few years now. On a good day, it’s a five-star hotel in Shanghai, shopping in Paris or winning a game of roulette in Las Vegas. On a bad one, it’s emergency landings, 12-hour long delays and an endless stream of obnoxious/annoying passengers.

Don’t let our svelte figures, exquisitely tailored uniforms and perfect smiles fool you. I’ve put together a list of the nine things that really get under a flight attendant’s skin. 1. “My seat is too small.”

Church out of State 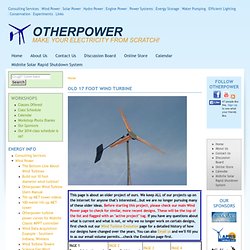 This has been a good machine and the following pages should be informative, but before you get too involved building this design be sure to see the updated 17 foot design here: And, be sure to check out our book Homebrew Wind Power for more small wind power information! These pages serve as a brief summary about building and flying a 17' diameter wind turbine from scratch. This is very similar to other designs we've built, just scaled up a bit. Pictured above are all the metal parts for the machine except for the tail. Above we have the main chassis for the machine all welded up. Above I've welded the 6 stator brackets on. Pictured above is the template we use to place the magnets on the steel rotors. Here I've laid out the path the magnets will take, and the approximate size that I think the coils should be. Pictured above we have the magnets 'super glued' onto the rotor, and one rotor is mounted to the machine. First we wind 1 test coil.