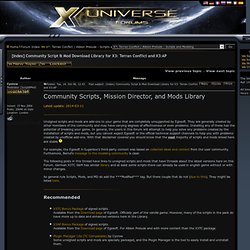 Text files are in the format, XXXX-LXXX.xml. First 4 numbers is the id, between 1000 and 9999. The second is the language id, ie 44 for english. Id 1000 in english would be, 1000-L044.xml. Note though that text page ids 1000-6999 cannot be used, while those text page ids are allowed (e.g. to just add commands). Use "Find in page" rather than manual browsing to check whether an ID is listed. Troubleshooting Occasionally the game may show "ReadTextN-M" where you expect a message or name. Look at the N in the error first. Text File ID The lower range of File IDs is for convenient, when the file merely adds to existing pages.

The File IDs below most likely make use of Page with same ID. Striking Software - FREEWARE for Microsoft Flight Simulator X. By Paul Wheeler and Mizuchi The X3 Rebalance Mod (XRM) is a total conversion mod of X3 Terran Conflict and Albion Prelude from Egosoft. 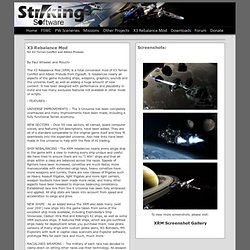 It rebalances nearly all aspects of the game including ships, weapons, graphics, sounds and the universe itself, as well as adding a huge amount of new content. It has been designed with performance and playability in mind and has many exclusive features not available in other mods or scripts. UNIVERSE IMPROVEMENTS – The X-Universe has been completely overhauled and many improvements have been made, including a fully functional Terran ecomony. SCR] MARS Fire Control (v5.25 - 16.02.13) SCRIPT] NPC Bailing Addon v1.7.8 [2010-09-21] First observations: Looks like it works great! 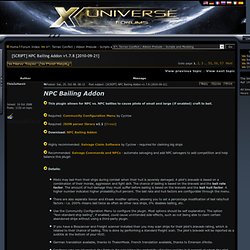 I would suggest (and hope for, hehe) an addition that adds random equipment to the ship. The game's "Force Pilot Eject" removes all shields and upgrades IIRC (and it looks that way so far). The "normal" bailing that comes with the game leaves you random upgrades/shields. Would be nice to see the same here. I would think you could (for example), have a random % chance that shields will be in cargo, then use <RetVar/If> get max shield type that can be installed, <>get number of shield bays, etc... then maybe a random chance at what shield(s) you might get (ie: a 5mj shield in a ship that can take 25mj shields). I know that's alot to ask... what do you think? SCRIPT]Advanced HyperDrive(AHD) v2.0 [Apr.09.2009] with video demo TC2.0a compatible.

I just rechecked the package, the commented code you saw was when the setup only did the installing .. now it does the deinstall too so lots of code commented but if you look at the beginning you'll see the hotkey being set I just stated a new game for a test . hotkey is present. 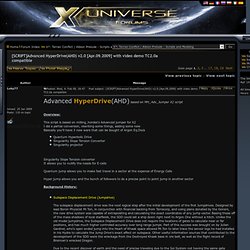 Maybe you didn't find it, it is called "Adv.HyperDrive" Look again to see if it is still not here Anyway thanks for pointing it out, i'll add to the OP the name of the hotkey and maybe coloring it so people can better see it And for quantum jump being innacurate it is working as designed, you need a Ecliptic projector to make it accurate And I forgot that X3TC doesn't have it in stock anymore, although there is a script that add it back on the German forums Ecliptic Projector German thread Depending on the feedback, i'll choose an option And for the autodrive, still in beta as i don't want strange behaviour Loky. 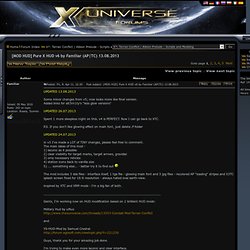 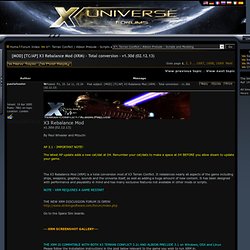 Renumber your cat/dats to make a space at 04 BEFORE you allow steam to update your game. The X3 Rebalance Mod (XRM) is a total conversion mod of X3 Terran Conflict.