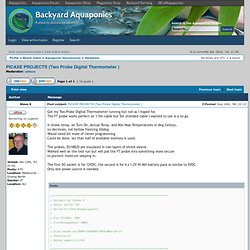 It shows temp. on Turn On, Actual Temp. and Min/Max Temperatures in deg.Celsius, no decimals, not bellow freezing (0)deg. Would need bit more of clever programming.Could be done, les than half of available memory is used. The probes, DS18B20 are insulated in two layers of shrink sleeve.Worked well on the test run but will pot the FT probe into something more secureto prevent moisture seeping in. The first DC socket is for 12VDC, the second is for 4 x 1.2V Ni-MH battery pack or similar to 5VDC.Only one power source is needed. S_read: readtemp 1,b0 'temperature on start/reset readtemp 4,b4 b2= 127 'minimum temp. var. School Electronics: Circuits and modules for GCSE Electronic Products. How to connect a LCD to a PICAXE. One of the very first questions that students ask is: How do I connect a LCD to a PICAXE microcontroller? 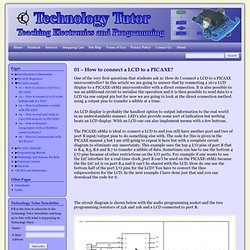 In this article we are going to answer that by connecting a 16×2 LCD display to a PICAXE-18M2 microcontroller with a direct connection. It is also possible to use an additional circuit to serialise the operation and it is then possible to send data to a LCD via one output pin but for now we are going to look at the direct connection method using 4 output pins to transfer a nibble at a time. LCD an der Picaxe - michaelschus Jimdo-Page! Electronics: Using the PICAXE with a Serial LCD. PICAXE ® Temperature. Picaxe BASIC has built-in commands for use with the DS18B20 digital temperature sensor from Maxim. readtemp pin, variable will read the temperature from the sensor connected to input 'pin' and store the value in the byte 'variable'. 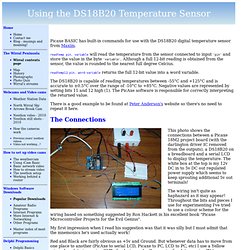 Although a full 12-bit reading is obtained from the sensor, the value is rounded to the nearest full degree Celcius. readtemp12 pin, word-variable returns the full 12-bit value into a word variable. The DS18B20 is capable of reading temperatures between -55°C and +125°C and is accurate to ±0.5°C over the range of -10°C to +85°C. Negative values are represented by setting bits 11 and 12 high (1). LCD Projects. Note: All pictures that follow are "clickable". 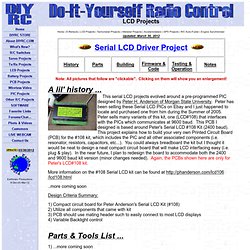 Clicking on them will show you an enlargement! A lil' history ... This serial LCD projects evolved around a pre-programmed PIC designed by Peter H. Anderson of Morgan State University. Peter has been selling these Serial LCD PICs on Ebay and I just happened to locate and purchased one from him during the Summer of 2005. More information on the #108 Serial LCD kit can be found at ..more coming soon Design Criteria Summary: Communicate with the PICAXE. PICAXE Microcontroller See also related article: Web Server/PICAXE Interface The PICAXE is normally programmed with the PICAXE Programming Editor via a serial interface cable. 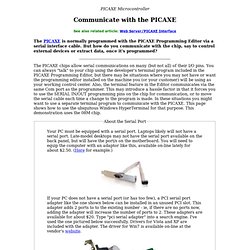 But how do you communicate with the chip, say to control external devices or extract data, once it's programmed? PICAXE LCD Interfacing. Connecting an LCD to a PICAXE provides a simple and easy mechanism to provide a low-cost serially driven LCD display which can be connected to other PICAXE's, microcontrollers and even PC's and PDA's. 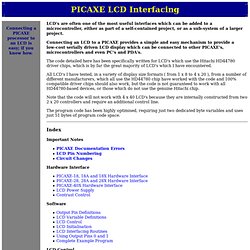 The code detailed here has been specifically written for LCD's which use the Hitachi HD44780 driver chips, which is by far the great majority of LCD's which I have encountered. All LCD's I have tested, in a variety of display size formats ( from 1 x 8 to 4 x 20 ), from a number of different manufacturers, which all use the HD44780 chip have worked with the code and 100% compatible driver chips should also work, but the code is not guaranteed to work with all HD44780-based devices, or those which do not use the genuine Hitachi chip. 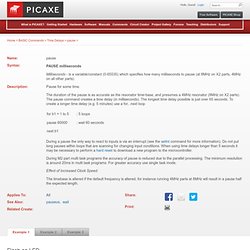 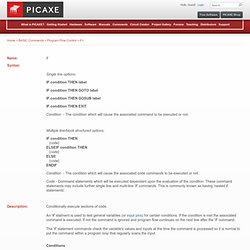 An 'if' statment is used to test general variables (or input pins) for certain conditions. If the condition is met the associated command is executed. If not the command is ignored and program flow continues on the next line after the 'if' command. The 'if' statement commands check the variable's values and inputs at the time the command is processed so it is normal to put the command within a program loop that regularly scans the input. ConditionsThe condition determine whether an action should be taken or not. The comparison operator may be any of ... Additionally, for the X1 and X2 parts, bit test conditions may be applied - The condition result will depend on whether a bit in the variable is set or clear.

PICAXE. Fig. 1 Schematic to my home built test board minus I/O resistors. 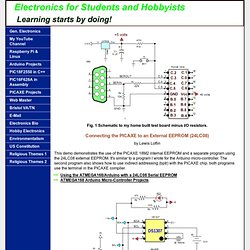 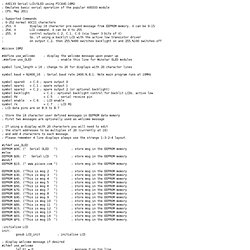 Communicate with the PICAXE. Learning Management Server (Moodle) @ SchoolNet - Sri Lanka. Exploring the PICAXE Microcontroller. Fig. 1 Picaxe controlling a H-bridge DC motor control. Exploring the PICAXE Micro-Controller by Lewis Loflin The PICAXE series of micro-controllers rank as the easiest and most cost effective way to use Microchip processors. I wanted an easier and less expensive way to introduce my students to the "PIC" micro-controller. Here I hope to get those starting out past poorly written literature and lack of simple working code examples.

I've used the Arduino-Atmga168 series of for a few years and have produced a number of circuits around them. The PICAXE gets around most of those problems. Fig. 2 Schematic to my home built test board minus I/O resistors. My teaching philosophy is to learn the "basics" and build upon them. PICAXE has several different types and I chose the middle unit to work with.

For more information on their other PICAXE "chips" visit their website at www.picaxe.com. PicAxe Charger. PICAXE LCD Interfacing. Mail (495)