Metallica - The Call of Ktulu (The Call of Cthulhu) Metallica - The Thing That Should Not Be. "The Dunwich Horror" H.P. Lovecraft ∷ Full Unabridged Cinematic Audio Book Horror Drama. At the mountains of madness. At the Mountains of Madness - Short Animation Movie. Patricia MacCormack - Deleuze and the Demonological Text. Patricia MacCormack - The Ethics of Inhuman Art. The Age of Lovecraft — University of Minnesota Press. Howard Phillips Lovecraft, the American author of “weird tales” who died in 1937 impoverished and relatively unknown, has become a twenty-first-century star, cropping up in places both anticipated and unexpected. 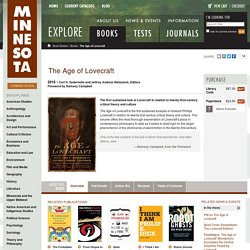 Authors, filmmakers, and shapers of popular culture like Stephen King, Neil Gaiman, and Guillermo del Toro acknowledge his influence; his fiction is key to the work of posthuman philosophers and cultural critics such as Graham Harman and Eugene Thacker; and Lovecraft’s creations have achieved unprecedented cultural ubiquity, even showing up on the animated program South Park. The Age of Lovecraft is the first sustained analysis of Lovecraft in relation to twenty-first-century critical theory and culture, delving into troubling aspects of his thought and writings. Lovecraft through Deleuzio-Guattarian Gates. In A Thousand Plateaus Gilles Deleuze and Félix Guattari invoke H.P. 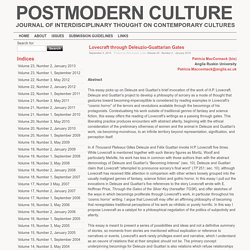 Lovecraft five times. While Lovecraft is mentioned together with such literary figures as Moritz, Woolf and particularly Melville, his work has less in common with those authors than with the abstract demonology of Deleuze and Guattari’s “Becoming-Intense” (sec. 10). The Mysterious Love of Sonia Greene for H.P. Lovecraft. I have always been curious about Sonia Greene, the woman who married H.P. 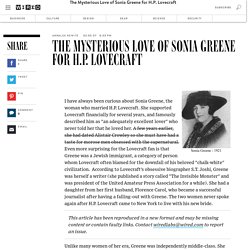 Lovecraft. She supported Lovecraft financially for several years, and famously described him as "an adequately excellent lover" who never told her that he loved her. It’s OK to admit that H.P. Lovecraft was racist. The World Fantasy Awards, presented at the World Fantasy Convention every fall, have been around for almost 40 years. 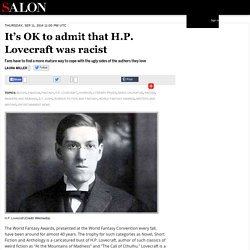 The trophy for such categories as Novel, Short Fiction and Anthology is a caricatured bust of H.P. Lovecraft, author of such classics of weird fiction as “At the Mountains of Madness” and “The Call of Cthulhu.” Lovecraft is a beloved figure in pop culture, and an influence on everyone from the Argentinian metafictionist Jorge Luis Borges to the film director Guillermo del Toro, as well as untold numbers of rock bands and game designers.

A New History of the Horror Story: From Homer to Lovecraft. The below essay, by attorney and writer Leslie S. 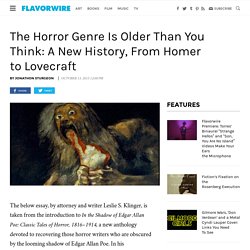 Klinger, is taken from the introduction to In the Shadow of Edgar Allan Poe: Classic Tales of Horror, 1816–1914, a new anthology devoted to recovering those horror writers who are obscured by the looming shadow of Edgar Allan Poe. In his introduction, Klinger locates the origin of the “tale of terror” not in Poe — as is often claimed — but in Homer. The H.P. Lovecraft Archive. "Supernatural Horror in Literature. I. 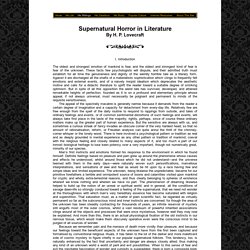 Introduction The oldest and strongest emotion of mankind is fear, and the oldest and strongest kind of fear is fear of the unknown. These facts few psychologists will dispute, and their admitted truth must establish for all time the genuineness and dignity of the weirdly horrible tale as a literary form. Against it are discharged all the shafts of a materialistic sophistication which clings to frequently felt emotions and external events, and of a naively insipid idealism which deprecates the aesthetic motive and calls for a didactic literature to uplift the reader toward a suitable degree of smirking optimism.

But in spite of all this opposition the weird tale has survived, developed, and attained remarkable heights of perfection; founded as it is on a profound and elementary principle whose appeal, if not always universal, must necessarily be poignant and permanent to minds of the requisite sensitiveness. "Notes on Writing Weird Fiction.