Food Rationing during World War 2. Before the Second World War started Britain imported about 55 million tons of food a year from other countries. 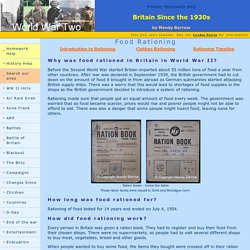 After war was declared in September 1939, the British government had to cut down on the amount of food it brought in from abroad as German submarines started attacking British supply ships. There was a worry that this would lead to shortages of food supplies in the shops so the British government decided to introduce a system of rationing. Rationing made sure that people got an equal amount of food every week. The government was worried that as food became scarcer, prices would rise and poorer people might not be able to afford to eat.

There was also a danger that some people might hoard food, leaving none for others. Geography Explorer: Rivers - Interesting and Educational Videos for Kids, Learning Game for Children. 30 places in Europe you must see in your lifetime - Travel. Irishprimaryteacher on Instagram: “This Essential Irish book is a brilliant resource for teachers and students too! The book is a small handbook which covers key phrases…” Australia for the Ashes – your interactive map and guide. UK-German Connection. Camelsshadows. Teachit Geography - Home page. Geography. Geographypaul.tumblr. Geography Education. Weather Around the World. Flights interactive: see the planes in the sky right now. Schools - what is weather. Novels: On Location - 487 Novels/593 Locations.