Cancellation of 4Cr ration cards termed 'serious' by SC. New Delhi, March 17 (UITV/IANS)- The Supreme Court on Wednesday sought reply from Centre and states, on a plea alleging cancellation of nearly four crore ration cards, in the absence of linkages with the Aadhaar card. 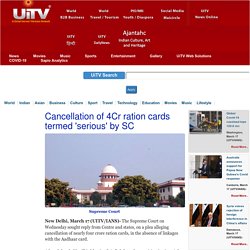 A bench headed by Chief Justice S.A. Bobde and comprising justices A.S. Bopanna and V. Ramasubramanian said: "The matter is too serious. We have to hear it. " Sunny Leone: Need in women of today to accept themselves as they are. Mumbai, March 8 (UITV/IANS)- In a new transformation video on the occasion of Women's Day, Sunny Leone is seen celebrating winning over the challenges in the form of judgmental and sexist comments, uncalled criticism for her dance steps, non-cooperation from the industry and also, the industry boycotting her at awards functions. 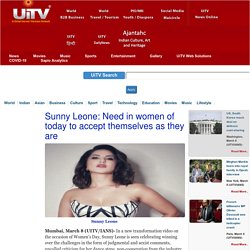 "Women play multiple roles in their life … of a daughter, wife, mother, sister and so on. To make everyone around them happy, they sometimes compromise their real-self. I would like to encourage all women to come and join me today and celebrate their real-selves without worrying about others. This day belongs to us...the female power," Sunny said. "I feel there is such a huge need in the women of today to accept themselves as they are and most importantly to love themselves in their own skin," she added. 9 charged for attack on ex-US envoy to B'desh. Surprisingly, Ravi Shastri indulges in 'banter' on social media. 2 killed, 2 wounded in Afghanistan capital explosions. Leach spins England to 227 run-win over India in 1st Test. Israeli PM Benjamin Netanyahu denounces ICC decision on jurisdiction. 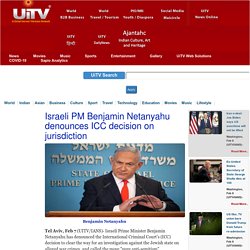 "We will fight this perversion of justice," Netanyahu said in a recorded statement on Saturday. The ICC's decision on Friday came after lengthy deliberations, prompted by a Palestinian request to probe Israeli military actions in the Gaza Strip and the West Bank, reports Xinhua news agency. Welcomed by the Palestinians, the decision by the court says that it has jurisdiction to investigate events that have occurred in territories in the West Bank and Gaza. Starc opts out of IPL auction, Smith sets base price at Rs 2 crore. New Delhi, Feb 6 (UITV/IANS) Australia pace bowler Mitchell Starc has not registered for the Indian Premier League (IPL) players' auction scheduled to be held on February 18 in Chennai while teammate Steve Smith, who was released by his former IPL franchise Rajatshan Royals has entered the auction with a base price of Rs 2 crore. 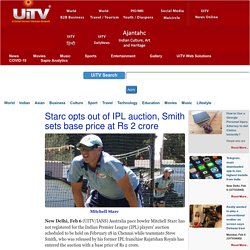 Starc, who has played just two seasons of the T20 tournament in 2014 and 2015, had a lacklustre summer against India in Test series picking 11 wickets across four Tests at an average of 40.72. He was the only bowler in Australia camp to leak over three runs an over in the series against India. There was speculation that he would command a big price at this year's auction. But according to a report in ESPNCricinfo.com, the left-arm pace bowler has opted out. He may have done it to manage workload and prepare for the T20 World Cup in India and Ashes at home this year. Marilyn Manson denies abuse charges, loses music and TV deals. Los Angeles, Feb 2 (UITV/IANS)- Singer Marilyn Manson has rubbished abuse allegations made by his former fiancee, actor Evan Rachel Wood, even as his music label cancelled contract and he lost out on a horror series deal. 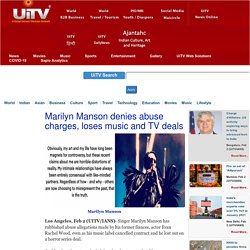 On Monday, the actress had claimed on Instagram that Manson "horrifically abused" her for years when they were in a relationship. "The name of my abuser is Brian Warner, also known to the world as Marilyn Manson. Iran starts celebrations marking Islamic Revolution's 42nd anniversary. Justin Trudeau: Canada suspends flights to the Caribbean, Mexico. Ottawa, Jan 30 (UITV/IANS)- Canadian Prime Minister Justin Trudeau announced new measures against curbing the spread of Covid-19, including the suspension of flights from the country to the Caribbean and Mexico until April. 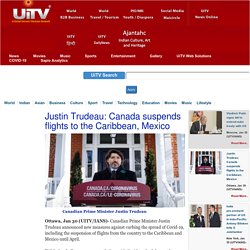 "With the challenges we currently face with Covid-19, both here at home and abroad, we all agree that now is just not the time to be flying," Xinhua news agency quoted Trudeau as saying at a press conference here on Friday. "By putting in place these tough measures now, we can look forward to a better time," he added. The Prime Minister said the country main airlines, including flag carrier Air Canada, WestJet, Sunwing and Air Transat, will cancel their services to all Caribbean destinations and Mexico, starting from Sunday until April 30. UN chief Antonio Guterres calls for immediate attention to 3 global emergencies. United Nations, Jan 29 (UITV/IANS)- United Nations Secretary-General Antonio Guterres called for immediate attention to three global emergencies after listing a long string of threats and challenges the world is facing. 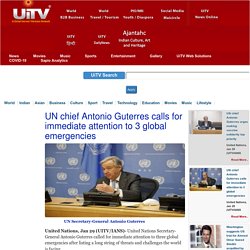 "Among the challenges we face, there are three global emergencies that demand immediate attention," the UN chief told the press conference held at the UN headquarters in New York on Thursday, Xinhua news agency reported. The secretary-general said that the first global emergency that needs immediate attention is the "distribution of vaccines for Covid-19. " Guterres said that more than 70 million doses have been administered, but less than 20,000 of these were on the African continent.

"A global immunity gap puts everyone at risk," he said. "Vaccine nationalism is an economic as well as a moral failure," he said. Pakistan opposes new UNSC permanent seats. Islamabad, Jan 27 (UITV/IANS)- As India, Brazil, Germany and Japan put forward efforts to reform the 15-member body of the United Nations Security Council (UNSC) and add seats of new permanent members, Pakistan has opposed the idea, stating that it would "kill the consensus-based process to make it more effective, representative and accountable. 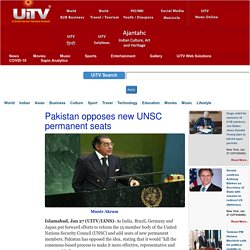 " "Any attempt to undermine or derail the Inter-Government Negotiations (IGN) process will prove counterproductive," urged Munir Akram, Pakistan's Permanent Representative to the UN. "The Inter-Government Negotiations (IGN) remains the only credible platform for a comprehensive reform of the Security Council," he added. He criticised the G-4 members (India, Brazil, Germany, Japan) for trying to create fear of losing the opportunity and need for reform unless their "procedural moves to short circuit the process were endorsed. 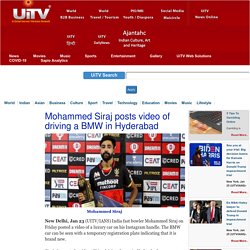 The BMW car can be seen with a temporary registration plate indicating that it is brand new. Siraj also posted a video of him driving the car in Hyderabad. The 26-year-old pacer was one of the standout performers for India as the team recorded a second consecutive 2-1 Test series win over Australia Down Under, the earlier being on the 2018-19 tour. Telangana to implement 10 per cent quota for EWS. Hyderabad, Jan 22 (UITV/IANS) The Telangana government has decided to implement 10 per cent reservation to the Economically Weaker Sections (EWS) in the state, Chief Minister K. 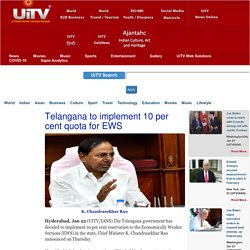 Chandrasekhar Rao announced on Thursday. He said a high-level review meeting will be held in the next two to three days on the matter and appropriate orders will be issued. Tamannaah Bhatia: I'm back to my pre-Covid body. Hyderabad, Jan 22 (UITV/IANS)- Tamannaah Bhatia says she has regained the strength of her pre-Covid days thanks to two months of consistent workout. On Friday, Tamannah shared a gym video on Instagram where she can be seen lifting weight. "You don't have to be extreme, just be consistent. 2 months of consistent, supervised workout routines with @devimeena and @kirandembla, and I'm back to my pre-covid body! In your face Covid-19. #BeStrongerThanYourExcuse #MakeItHappen #BeastMode #doiteveryday," the actress shared. Sherlyn Chopra: Sajid Khan should issue a public apology. Mumbai, Jan 21 (UITV/IANS)- Actress and adult content creator Sherlyn Chopra, who has levelled accusation of sexual harassment against Sajid Khan, has said that she just want a public apology from the actor-filmmaker.

Sherlyn, who is among several actresses who have levelled sexual harassment charges against Sajid, didn't seem too keen for initiate legal action. "What I am going to achieve by doing that (legal action)? I just want him to issue a public apology not just to me but to all those women with whom he has tried to indulge in inappropriate acts. Greet new US Prez Joe Biden via Snapchat lens from home. San Francisco, Jan 20 (UITV/IANS)- The Joe Biden team has launched a Snapchat lens that will virtually take users to the Capitol Hill as the new US president is sworn-in on Wednesday.

The Snapchat lens will also play a message from Biden addressing Snapchatters: "Hey Snapchat!! It's me, Joe. Welcome to inauguration! " "Once the inaugural lens is selected in the Snapchat reel, users can take a selfie in front of the Capitol as confetti falls from above," reports The Verge. If users flip the camera around, they'll be greeted by a Biden Jumbotron in front of a crowd of inauguration attendees. Ayurvedic solutions for personal care. New Delhi, Jan 16 (UITV/IANS)- A new solution-based personal care range, 'Clovia Botaniqa', was launched, especially for mothers.

The products are based on Ayurvedic formulation comprising of oils, body butters, face washes, face masks, shampoos, conditioner and serums that offer solutions for problems faced during and post-pregnancy such as hair-fall, tired/dull skin, stretch marks, dryness, acne as well as stress. Suited to all skin types, the products are pH-controlled plant-based remedies, making it safe to be around babies and therefore, apt for new mothers and pregnant women, said a spokesperson for the company. The products are toxins, paraben or sulphate free and enriched with active ingredients derived from Moringa, Argan, Patouchali, Aloe Vera, Jasmine oil, Lavender, Jojobal, Olive Saffron, Matcha tea, Himalayan clay, etc that heal skin and hair naturally and from within.

Sara reveals her sunset mood. Arsenal defender Rob Holding signs new contract until 2024. Priyanka Chopra Jonas wraps up 'Text For You' Indian Army rescues pregnant woman stuck in snowbound Kashmir to hospital. Pak soldier killed in firing from across Afghan border says Army. Virat Kohli's 'conflict' grows, Ethics Officer sits on complaint. New Delhi, Jan 7 (UITV/IANS) Over six months after a conflict of interest complaint against him was filed for being in breach of Rule 38 (4) of the constitution of the Indian cricket board, India captain Virat Kohli has found himself at the centre of another similar controversy with his investment in India's official kit sponsor and merchandise partner coming to light.