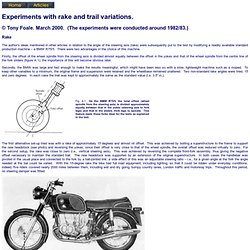 March 2000. (The experiments were conducted around 1982/83.) Rake The author’s ideas mentioned in other articles in relation to the angle of the steering axis (rake) were subsequently put to the test by modifying a readily available standard production machine – a BMW R75/5. There were two advantages in the choice of this machine. Firstly, the offset of the wheel spindle from the steering axis is divided almost equally between the offset in the yokes and that of the wheel spindle from the centre line of the fork sliders (figure A.1); the importance of this will become obvious later. Secondly, the BMW was large and fast enough to make the results meaningful, which might have been less so with a slow, lightweight machine such as a moped. The first alternative set-up tried was with a rake of approximately 15 degrees and almost nil offset.

In the foregoing chapter, we suggested that balance might be enhanced, particularly at low speeds, by steepening the head angle. Trail Rake. Alternatives for suspension of front wheel. This article was written 16 years ago but little seems to have changed since then, except that BMW and YAMAHA have produced road models using systems mentioned herein, and the Britten has achieved racing success with a plastic "Hossack style" front end. .© 1986 -- 2002 Tony Foale Over the past few years we have heard much about a new generation of front suspension systems, usually with the promise that soon all motorcycles will be built this way or that. 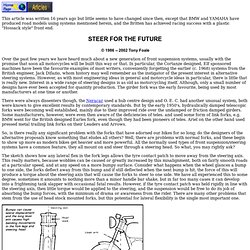 In particular, the Cortanze designed, Elf sponsored machines have been the favourite examples of most writers, conveniently forgetting the earlier (c. 1968) systems from the British engineer, Jack Difazio, whom history may well remember as the instigator of the present interest in alternative steering systems. However, as with most engineering ideas in general and motorcycle ideas in particular, there is little that is really new.

Motorcycle. Motorcycle traffic in Indonesia Most of the world's motorcycles, 58%, are in the developing countries of Southern and Eastern Asia, and the Asia Pacific, excluding Japan which is one of the world's major car users. As of 2002[update], India, with an estimated 37 million motorcycles/mopeds, was home to the largest number of motorised two wheelers in the world. China came a close second with 34 million motorcycles/mopeds in 2002.[8][9] As the middle class in India, China, and other developing countries grows, they are repeating the transition from motorcycles to cars that took place in the US in the years after World War I, and in Europe following World War II, and the role of motorcycling is changing from a transport necessity to a leisure activity, and the motorcycle is changing from a family's primary motor vehicle to a second or third vehicle. 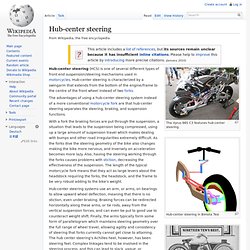 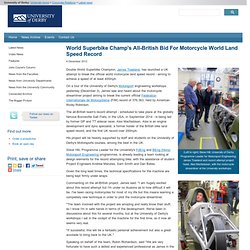 The all-British team's record attempt - scheduled to take place at the globally famous Bonneville Salt Flats, in the USA, in September 2014 - is being led by former GP and TT sidecar racer, Alex Macfadzean.