Most Luxurious Private Jets in The World - Types of Jets. For the rich and really busy people, private jet is not just a luxury, it is a necessity. 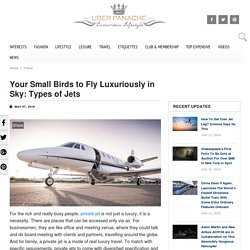 There are places that can be accessed only via air. For businessmen, they are like office and meeting venue, where they could talk and do board meeting with clients and partners, travelling around the globe. And for family, a private jet is a mode of real luxury travel. To match with specific requirements, private jets to come with diversified specification and type. They can be small or big and can be of different propelling technologies. The Challenger 850 is a Heavy Jet Heavy Jets These jets are large sized accommodating large cabin.

The Citation X Plus is a mid-sized jet. Mid-sized Jets Mid-sized jets can carry almost 12 people. A Turbo-prop plane with Ice-ski integration. Light Jets They are small private planes capable of carrying five to eight passengers. What Makes Turboprop Different From Turbojets - UberPanache. Turboprop, the word is derived from Turbo propeller. 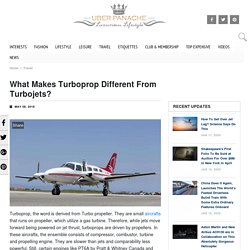 They are small aircrafts that runs on propeller, which utilize a gas turbine. Therefore, while jets move forward being powered on jet thrust, turboprops are driven by propellers. In these aircrafts, the ensemble consists of compressor, combustor, turbine and propelling engine. They are slower than jets and comparability less powerful. Still, certain engines like PT6A by Pratt & Whitney Canada and TPE331 by Honeywell are comparable even to even to that of military aircrafts. The engine and the propeller are the basic parts of a turboprop. Generally, turboprops are developed for lower speed that jets. Important Tips For Flying with Fido - Travel Tips - UberPanache. Ensuring a safe and comfy flight for your pet is more than just a responsibility. 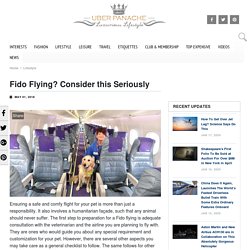 The Key To Better Shape After a Long Luxury Cruise Tour. In a lavish cruise, earning some pounds of fats and getting heavier is normal. 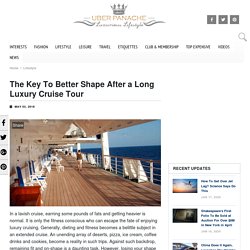 It is only the fitness conscious who can escape the fate of enjoying luxury cruising. Generally, dieting and fitness becomes a belittle subject in an extended cruise. An unending array of deserts, pizza, ice cream, coffee drinks and cookies, become a reality in such trips. Against such backdrop, remaining fit and on-shape is a daunting task. Travelling Abroad? Read This To Avoid Some Unprecedented Awkwardness. China Launched Driverless Bullet Train - HIgh Speed Train in China. Introduced in time of 2022 Beijing Winter Olympics, China launched driverless bullet train with world’s fastest speeds up to 350 Kmph. 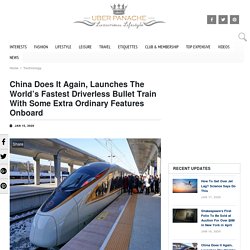 The train will connect China capital Beijing to Zhangjiakou has just entered service, cutting the travel time between the two from three hours to 47 minutes. But this isn’t just another bullet train. The route will stop at 10 stations, including Badaling Chang Cheng, the most popular section of China’s Great Wall; also many of stations will be close to the venues of 2022 Beijing Winter Olympics. It features carriages with 5G signals; wireless charging docks, and intelligent lighting, along with a storage system that has been designed specially to meet the needs of athletes. Most Expensive Lipsticks In The World. Lipsticks! 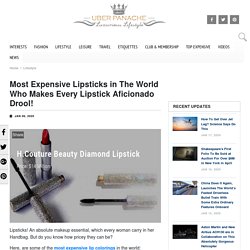 An absolute makeup essential, which every woman carry in her Handbag. Shakespeare's First Folio To Be Sold At Auction For Over $6M. Christie’s auction house has recently announced that the rare 1623 book that brought together William Shakespeare’s works for the first time will go up for auction in April. 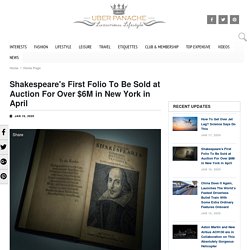 The auctioneer said, the book, called, Comedies, Histories and Tragedies, is expected to sell for between USD 4 million (Rs 28.3 crore) and USD 6 million (Rs 42.5 crore). The book is previously owned by Mills College a private liberal arts college in Oakland, California is one of only six copies known to exist in private hands. This book is considered as one of the most influential books of all time, right next to the Bible).

First Folio contains 36 of Shakespeare’s plays such as “Macbeth,” “The Twelfth Night,” “Measure for Measure” and “Julius Caesar,” according to Christie’s. The auction is on April 24, but the copy coming up for sale will first be on display in London, Hong Kong and Beijing before it goes to the highest bidder in New York. Shayne Warne Creates Cricket Auction History - Baggy Green. The bushfire crisis has been ongoing in Australia since September and has caused ripples of pain across the globe. 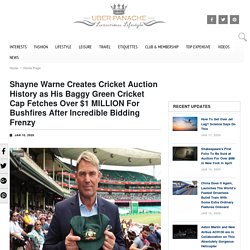 Legendary spinner Shane Warne has come forward to help those affected by the fire in Australia's jungles. Warne recently auctioned his iconic ‘Baggy Green’ cap worn during his Test career to help the victims of the catastrophe. Aston Martin collaboration with Airbus ACH130 - UberPanache. Aston Martin has collaborated with European Multinational Aerospace Corporation to give an Airbus chopper a new taste. 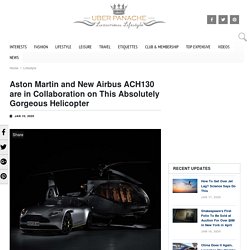 The World's Most Expensive Car Ever Sold for $44 Million. London supercar trader Gregor Fisken, 55, bought the 1962 Ferrari 250 GTO for some $44 million in October 2017 on the understanding that its missing original gearbox would be sourced and later handed over. 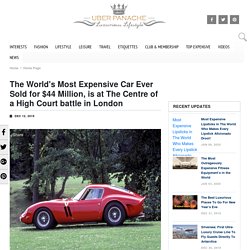 It makes it the world's most expensive publicly recorded car sale. But the seller, Washington-based lawyer Bernard Carl, claims Mr Fisken quibbled over the logistics of delivering it and has breached the terms of their contract, meaning he no longer has any rights to it. Now, the world's most expensive car is at the centre of a High Court battle between a top dealer and a US collector, as a judge must decide who is entitled to the £37m vehicle's gearbox.

Mr Carl is demanding that Mr Fisken hand over $500,000 (£380,000) to cover his efforts in locating the "unique and special" gearbox, which is being held by a classic car dealer in America. The legal dispute over the return of the gearbox, and whether Mr. Heineken and KLM Brings Europe's Largest Airport Lounge - Schiphol. The Heineken’s new bar at national carrier KLM’s recently-opened 6,800 sq mtr. non-Schengen Crown Lounge at Amsterdam Airport Schiphol is part of a Dutch-themed hospitality offer that will serve over one million passengers in its first year. Two famous Dutch brands, Heineken and KLM, have partnered to create a new level of bar experience in what is now the largest airline lounge in Europe. Prominently located in the main ‘city’ area of the Crown lounge, the Heineken bar is the first of its kind at an airport and features the flagship brand Heineken and its zero alcohol variant, Heineken 0.0.

It is still one of the best destinations in Europe to enjoy the delights of sweets, confectionaries, wine, desserts and rare delicacies. Among culinary traits, French diet is almost a vault for foodie travelers. The sophistication in here is worth sharing. Fastlane High-Tech Pool is an Essential Luxury For All. Fastlane’s high-tech pool is being used by several top athletes.

We all know, swimming pools has static water, but Fastlane Pools has changed the perception. The latest swimming pools from this high-tech manufacturer delivers adjustable currents. The water current can be changed to resemble any water body like that of river or a calm sea. The pools are also with underwater treadmills and temperature control. It also purifies water automatically. Fastlane Pool has been delivering swimming pools since 1988. Per fitness experts, the pool will increase flexibility and strength of muscles. Jaeger LeCoultre Master Ultra Thin Tourbillon: Luxury Watches. Jaeger-LeCoultre-Master-Ultra-Thin-Minute-Repeater-Flying-Tourbillon-watch-1 For every watch you own form them; Jaeger LeCoultre congratulates you for your confidence. Such is the dignity and pride associated with Jaeger LeCoultre. This is a heritage in itself with close to 180 years of tradition in making the finest of the fine watches in the world.

And, Jaeger LeCoultre Master Ultra Thin Tourbillon is a masterpiece that extends the heritage of making select luxury Swiss watches. The Master Ultra Thin Tourbillon reflects an aura of brilliance and elegance that would enhance the personality of a Man. ITC Introduces World's Most Expensive Chocolate. Have you ever heard of chocolates that cost INR 4.3 lakh per kg? No, they aren't made of gold. Diversified group ITC has introduced the world's most expensive chocolate. Its price is Rs 4.3 lakh per kg. Drake's New Car addition has a Rolls-Royce with a Golden Owl. Dubai’s Shape-shifting Skyscraper - Hi-Tech Architecture.

Apartments in the Shape-changing Skyscraper can more 360 degrees in both direction with voice control command. Dubai, the global city boasts of its modern architectural wonders. However, there seems no limit to what architects are trying to achieve in this city. Boutique Homes - The Ultra Luxury Segment Real Estate Property. As per a recent report, demands for Boutique Homes is increasing in Indian market. Shadecraft’s Sunflower: Smart Sunshades for Luxury homes. Shakira Lists Her Luxury Miami Waterfront House For Sale. Shakira, the top popstar, listed her property in Miami Beach at the price of USD 11.648 million. Michelangelo’s Tuscan Villa for Sale At USD 9.5 Million. Are you an art enthusiast? Royal Dining Etiquettes - Dining Rules for Royal Dinner. Alba White Italian Truffle, The King of Truffles. Luxury Shopping Malls: A Unique statement of Experience. Canada’s West Edmonton Mall provide an unending array of entertainment and experience to consumers.

As India is moving forward to become a top economy of world, several aspects of the country caught up with a glare and glamorous growth. Flying in a Private Jet? Know this Jet Etiquettes for total enjoyment. Since anything we do has an impact, bouncing back to us directly or indirectly, we must be vigilant enough about our behavior. MB&F launched the new Legacy Machine No.2 in Red Gold Blue. Fastest Audi Cars, Being Speed-Gentle On Roads! Men’s Most Expensive Cosmetic Brand WOMO. Uberpanache. Uberpanache. Investment Strategies For Billionaires! Read About The Most Expensive House In The World! Most Expensive Private Jet In The World! 24-Karat Gold Cannabis Cigar. Luxury Life of Billionaires. Expensive Water Bottle For Cricketers. Secret Behind The Queen Elizabeth's Gloves. World's Largest Luxurious Yacht - Eclipse.

Buying a Yacht? Seven things to know beforehand. Know How Billionaires Spend Their Wealth. The Super Writing Instrument, Luxury Pens from Styljoux. More Indians are Travelling to Luxury and Exotic Destinations. Things to carry while on a luxury yachting. The Best Perfumes in the World for Women. Most Expensive Pen In The World. 5 Grooming Essentials Every Man Should Own. Five Trendy handbags for Fashion fusion. Read On To Find Out What Billionaires Do With Their Money.