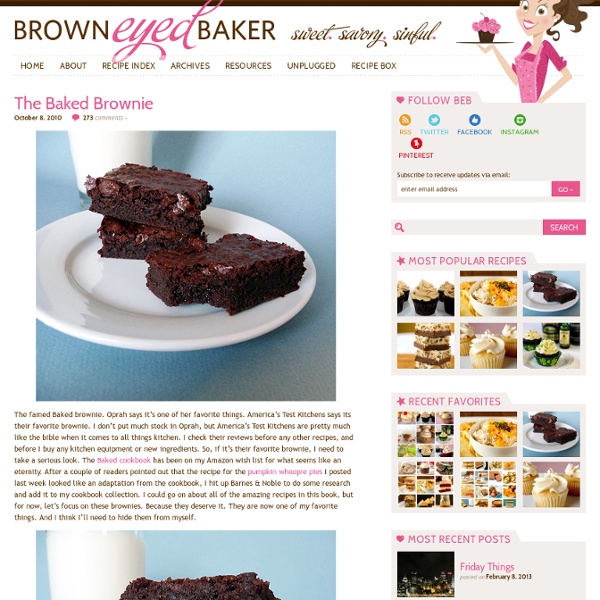 The famed Baked brownie. Oprah says it’s one of her favorite things. America’s Test Kitchens says its their favorite brownie. I don’t put much stock in Oprah, but America’s Test Kitchens are pretty much like the bible when it comes to all things kitchen. I check their reviews before any other recipes, and before I buy any kitchen equipment or new ingredients. So, if it’s their favorite brownie, I need to take a serious look. has been on my Amazon wish list for what seems like an eternity. There is a great explanation in the book about how the Baked brownie recipe came to be, which is a great read. They have a good bit of height given that they don’t have any leavening agents, so they aren’t thin, gooey and smooshed like some brownies (this is a good thing). Three years ago: Outrageous Brownies

Dijon Chicken Club Sandwiches By the time I get home from work, I often don't feel like cooking a big meal. But if I've done some of the prep work in advance, it becomes really easy. This is pretty much my weekday plan. If I didn't do this, we would end up eating out a lot more often, or making frozen pizzas. When ever I grill chicken, I make a couple extra pieces so that I have leftovers for salads or sandwiches during the week. If I'm making a meat sauce for pasta, I like to double the meat and put half of it away to make a pizza or tacos later in the week.

60 Second Chocolate Chip Cookie A la Mode I had so much fun developing this recipe. Talk about kinda dangerous though. This baby is baked in 60 seconds, no lie!! The cookie dough recipe is prepared right in your ramekin, so we are also talking about minimal dishes. Win win, right? You know those fabulous pizzookie’s you order at certain restaurants?

Beer Battered Onion Rings One day, months ago, after Ben and I were watching a show on the Food Network about fried foods, Ben had asked me to recreate the beer battered onion rings that were featured. Knowing I’m not one to frequently bust out a vat of oil to “waste” on frying, I quickly filed his request in the very back of my mind. No, seriously, the very back shelf of my brain that is probably full of dust and other undesirable recipe requests. Onion rings have never been one of my favorite foods. The only time I’ve ever had them was when someone else ordered them at a restaurant and shared one or two with me. Dozen Flours: 30 Calorie Chocolate Chip Meringue Cookies Please allow me to present the thirty calorie cookie... you know you want one, don't you? Go ahead, indulge! The best part of this cookie aside from the fact that they taste heavenly, is that you don't have to feel guilty eating them.

Roasted Baby Potatoes Wow...these look like little pillows of perfection! I am such a potato junkie! Love this recipe! Chocolate Hazelnut Cake Preheat oven to 350ºF. Sift together the flour, cocoa powder, baking soda, and salt into a bowl. In another bowl, with an electric mixer on medium-high speed, beat the butter and sugars until light and fluffy, about 2 to 3 minutes. Add the eggs and vanilla and beat until combined.

HOT CHOCOLATE ON A STICK recipe If you’re new here, welcome. I’m AmberLee, and since writing this post, I’ve opened up a little chocolate shop. I’d love to have you stop by, don’t forget to send me a hot chocolate flavor suggestion. Or say hello on facebook. I’d like that too. Flourless Chocolate Cake Flourless Chocolate Cake Prep time: Cook time: Total time: 18 oz. bittersweet chocolate6 eggs1 cup butter½ cup water¼ tsp. salt¾ cup granulated sugar⅛ cup powdered sugar Preheat oven to 300 degrees. Brownie Cookies « Before I start telling you a little about these cookies, doesn’t the photo above just make you want to drool. I mean what is better than chocolate cookies and a big glass of milk? It reminds me of being a kid, when life was so simple and carefree. Oh yeah, and you could eat things like this without having to work it off at the gym for 2 weeks. Childhood is such an amazing part of life! There are two things you should know about me (some of you may already know) first is that I love cookies and second is that I love chocolate!

Brown Sugar Toffee Cookies "If one day it happensyou find yourself with someone you lovein a café at one endof the Point Mirabeau, at the zinc barwhere wine stands in upward opening glasses,and if you commit then, as we did, the errorof thinkingone day all this will only be memory,learn to reach deeperinto the sorrowsto come-to touchthe almost imaginary bonesunder the face, to hear under the laughter the wind crying across the stones. Kissthe mouthwhich tells you, here,here is the world. This mouth. This laughter. The Web’s Greatest Burger Recipes There’s a 99% chance you’ll be around a grill at some point this Memorial Day Weekend. Included in that 1% of people who aren’t are those too hungover to go outside and face the sun, those who somehow got caught at the office and the .0001% of the population that doesn’t like food off the grill. If you’re the one flipping the burgers and you want to give something new a try, or you want to hang on to a couple recipes for future barbecues, we present: The Web’s Greatest Burger Recipes. Logan County Hamburger

Blueberry Crumb Bars with Rosemary Crust I grew up listening to my mom's old records (and cassette tapes) of Jacques Brel, The Mamas & The Papas, Françoise Hardy, and Simon & Garfunkel - maybe a little Neil Diamond too. Each song felt like a secret treasure to my young, eager, ears. At the wise age of six I was utterly mesmerized by Françoise's clear, sometimes melancholy, voice, and lush lyrics. "Dream a Little Dream of Me," as sung by Mama Cass, was pure perfection- oh, how I wanted to know what it felt like to be so much in love that I'd ask someone to keep me in their dreams (and what do birds sound like when they sing in sycamore trees?). "Ne Me Quitte Pas" was deliciously heart wrenching (although the more recent version by Emilíana Torrini is equally haunting).