A Colossal Dilemma Within Science & Religion 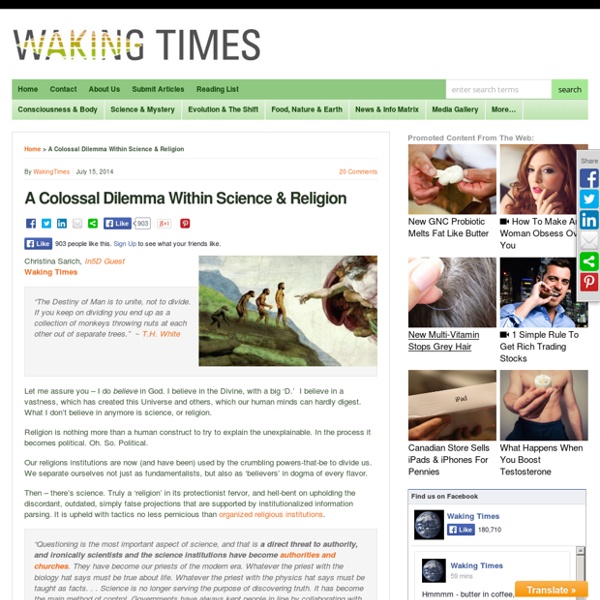 Christina Sarich, In5D GuestWaking Times “The Destiny of Man is to unite, not to divide. If you keep on dividing you end up as a collection of monkeys throwing nuts at each other out of separate trees.” ~ T.H. White Let me assure you – I do believe in God. I believe in the Divine, with a big ‘D.’ Religion is nothing more than a human construct to try to explain the unexplainable. Our religions institutions are now (and have been) used by the crumbling powers-that-be to divide us. Then – there’s science. “Questioning is the most important aspect of science, and that is a direct threat to authority, and ironically scientists and the science institutions have become authorities and churches. This ‘scientific’ paradigm is not meant to heal humanity, it is meant to keep it sick. “Every year, nearly $100 billion is invested in biomedical research in the US, all of it aimed at teasing apart the invisible bits of the body. Humanity’s True History Our divinity is our biggest secret. Dr. Dr.

Banksy’s New Apocalyptic Theme Park Is Designed to Disappoint A glitchy Ariel is one of the Banksy works that will greet crowds to Dismaland. (all images courtesy Christopher Jobson of Colossal) Today, it was officially announced that British artist Banksy has constructed a dystopian riff on Disneyland in a derelict seaside resort in Weston-super-Mare, England. Called Dismaland, the ambitious five-week project is sure to attract visitors eager for the artist’s brand of viral culture jamming and populist humor, but there’s a twist. Most of the art on display at Dismaland is not by Banksy — though he has contributed 10 new works — but by 58 artists invited to participate, including blue-chip names Damien Hirst, Jenny Holzer, and David Shrigley, and popular artists associated with street art like Espo, Escif, Bäst, and El Teneen. The scale of the project is impressive.

20 History Questions They Refuse To Answer In School Traditional educational systems basically teach us that the history of man only dates back to about 8,000 years ago while religious texts date mankind to approximately 6,000 years ago. It is more than obvious that there a massive push to occlude our true history and origins. While you may not agree with some of the questions, please try to view them with an open mind.

Why Atheists Don't Really Exist Confirmation bias is the tendency to ascribe greater significance to information which supports our pre-existing theories and lesser significance to information which contradicts those theories. We often do this subconsciously. For example you get a new car, and suddenly you notice that type of car on the road with a much greater frequency than you had noticed before. But though confirmation bias generally refers to the inclusion or exclusion of data, there are other ways we can shoehorn the obvious to make it fit within our world view.

Learn to Fight Capitalism at the School of Disobedience Jani Leinonen, “School of Disobedience” (2015) (courtesy the artist) A forthcoming exhibition in Helsinki will offer visitors an education grounded in disobedience and protest, equipping them with tools and ideas to challenge society’s injustices and fight for change. The School of Disobedience, which opens on September 4 at Finland’s contemporary art museum, Kiasma, is part art show, part educational institution: visitors to the museum are treated as students, receiving lessons from the more than 100 works on view or through a series of workshops with curricula that encourage civil disobedience through different media. Conceived by Finnish artist Jani Leinonen, whose own work is very critical of capitalist systems, the school intends to instill in the public — particularly young people — an urgent desire for social justice. Jani Leinonen, “School of Disobedience,” 2015 (courtesy the artist) (click to enlarge)

How to Memorize Things Quickly People like to joke that the only thing you really “learn” in school is how to memorize. As it turns out, that’s not even the case for most of us. If you go around the room and ask a handful of people how to memorize things quickly, most of them will probably tell you repetition. Sex magic Paschal Beverly Randolph[edit] The earliest known practical teachings of sex magic in the Western world come from 19th-century American occultist Paschal Beverly Randolph, under the heading of The Mysteries of Eulis: If a man has an intelligent and loving wife, with whom he is in complete accord, he can work out the problems [of how to achieve magical results] by her aid. They are a radical soul-sexive series of energies...The rite is a prayer in all cases, and the most powerful [that] earthly beings can employ...it is best for both man and wife to act together for the attainment of the mysterious objects sought. Success in any case requires the adjuvancy of a superior woman.