28 Online Photo Editing Websites To have Fun With - www.1stwebdesigner.com (HTTP) 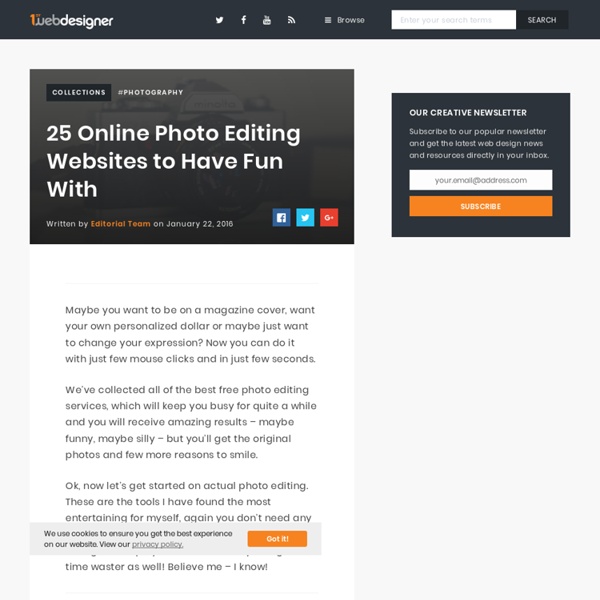 Maybe you want to be on a magazine cover, want your own personalized dollar or maybe just want to change your expression? Now you can do it with just few mouse clicks and in just few seconds. We’ve collected all of the best free photo editing services, which will keep you busy for quite a while and you will receive amazing results – maybe funny, maybe silly – but you’ll get the original photos and few more reasons to smile. Ok, now let’s get started on actual photo editing. BeFunky BeFunky Photo Effects allow everyday people to easily create photographically rich and artistic results from their digital images without the need for any technical knowledge. FunPhotoBox The FunPhotoBox site is a place where you can create funny pictures from your photos. PicArtia Create photo mosaic Online and Free! Photo 505 Huge collection of photo templates, which will keep you busy for quite a while. Loonapix In a few words – Loonapix is going to beautify your life. Funny Photo Dumpr WriteOnIt MagMyPic FaceInHole

Dumpr - Photo Fun - www.dumpr.net (HTTP) Y as a Consonant and a Vowel (Phonics on the Web) Sometimes, the letter y is a consonant, and other times it is a vowel. The rule for telling the two apart is simple: The letter y is a consonant when it is the first letter of a syllable that has more than one letter. If y is anywhere else in the syllable, it is a vowel. Examples of Y as a Consonant yes yam yell yellow yogurt Examples of Y as a Vowel gym my cycle baby hairy sky 10 Free Web-based Alternatives to Photoshop I’m fed up with Photoshop and its one billion rarely-used features. How about a simple photo-editor that’s quick, easy, and doesn’t cost a thousand dollars. Fortunately, there’re tons of web-based photos editors popping up. Most are crap, but some are promising. Check out these free web-based Photoshop alternatives: Arguably, Picnik is the most popular web-based photo editor. Very polished interface. Part of the Aviary suite of creative apps, Phoenix also offers layers and compositing. Adobe was a little late to the web-apps game, but this is a pretty good first try. Nice, simple, and clear interface, with no ads at all. flautR offers a cornucopia of image tools, boasting thousands of photo effects. Another ad-free editor. Hmm… looks like Pixenate was “inspired” by Pic Resize. Another simple interface. An example of how ugly these apps can get. Let me know if I’ve missed any other good ones. If you liked this post, please bookmark it on del.icio.us.

Says-It.com - www.says-it.com (HTTP) Top 10 freeware games for Windows Vista & Windows 7 If you are looking for some cool addictive games to download free for your Windows computer, here is our pick of some cool freeware classic games for Windows. Do note then usually games and screensavers are accompanied by toolbars and third-party offers, so you may want to exercise caution when you install them and opt out of offers when required. Free download games for Windows 1] UFO Alien Invasion is a game in which a player fights brutal aliens that are trying to take control of the planet Earth. 2] Red Eclipse is a first-person ego-shooter, built as a total conversion of Cube Engine 2. 3] Death Rally Car Racing Game. 4] Little Fighter 2 2.0. 5) Mario Forever : Block Party 1. 6] Shootiah 2.0. 7] Zelda Forever. 8] Alien Exterminator. 9] Highway Pursuit. 10] Mario Forever Galaxy 1.8 . We repeat, games are a vector for spyware. These 5 Free Fun Windows Store Game Apps for Windows 8 may also interest Windows 8.1 users. Do share links to any freeware games you may be aware of.

The iPad as a Photographer’s Travel Helper [a Review] If you’re like me (and maybe even if you’re not), you’ve been looking for a photographer’s helper for your travels. My situation is that in addition to vacation trips, I episodically deal with bursts of travel for my (non-photographic) job, and am barred from using my work laptop for non-work-related tasks. My needs (or, to be more honest, desires) when it comes to travel gear didn’t really seem that challenging, but have gone unfulfilled until lately: Back up the images on my cameras’ cardsView the images on a screen of sufficient quality that I can spot motion blur and focus issuesGear needs to be lighter / smaller / less complicated than a second (non-work) laptop, particularly when dealing with airport securityDecent battery life, with small / flexible recharging accessories — this is particularly helpful for non-work (vacation) travel, when AC wall power can be hard to come byProvide a way to get particularly valued images to an offsite backup — via WiFi or 3G cell connection

The Inside Scoop on the Outside Culture We’ve been through a lot of ups and sideways with this site. Luckily we’ve had no real downs with the exception of one. We’ve been pursued by the torrent police, accused by conspiranoia geeks of all sorts of shenanigans and high weirdness, gone through two format changes, added and subtracted several shows, hit some home runs, triples, doubles and singles. Too many baseball analogies? Times have changed and changed drastically. Alterati.com will be archived and merged into Incunabula/Greylodge by the end of this month. We’re merging sites for editorial reasons. We’ve had a blast serving up nuggets of alternative goodness and will be continuing to do so on the new Inc/GL site into the foreseeable future. From all of us, to all of you, thanks for all the link love, traffic, and wonderful letters full of tips and kudos.

Metacomet-Monadnock Trail This topic is about the footpath located in Massachusetts and New Hampshire. It should not be confused with the similarly named Metacomet Trail of Connecticut. Trail description[edit] The Metacomet-Monadnock Trail extends from the Connecticut/ Massachusetts border through Hampden, Hampshire, Franklin, and northwestern Worcester counties in Massachusetts, and Cheshire County in New Hampshire. The southern terminus of the trail is located in southeast Southwick, Massachusetts, at Rising Corner Road and is identified with a kiosk. Southern section[edit] Northern section[edit] Summit view of Grand Monadnock on a July weekend. Trail communities[edit] The M&M Trail passes through land located within the following incorporated towns. History[edit] The Metacomet-Monadnock Trail receives its name from the Metacomet Trail in Connecticut, of which it is a logical extension, and from Mount Monadnock in New Hampshire. The M&M Trail was designed in the 1950s by the late Professor Walter M. [edit]

Pronti Al Peggio - Pronti Al Peggio: la musica in tv. Sul web. Luigi Serafini Luigi Serafini (born in Rome, 4 August 1949) is an Italian artist, architect and designer. He is best known for creating the Codex Seraphinianus, an illustrated encyclopedia of imaginary things in what is believed to be a constructed language. This work was published in 1981 by Franco Maria Ricci, out of Milan, and of interest and inspiration to others. Career[edit] During the 1980s Serafini worked as an architect and designer in Milan. He has a laboratory of ceramics in Umbria, and continues to give touring personal exhibitions, especially in the Netherlands, and participate in art collectives. In May 2007, he held an "ontological exhibition" Luna Pac in Milan at PAC in Milan.[1] He occasionally gives interviews in Italian media and art publications.[2] In July 2008, he completed a polychrome installation "Balançoires sans Frontières" (Altalene senza Frontiere) in Castasegna, Switzerland.[4] Codex Seraphinianus[edit] The cover of Pulcinellopedia (piccola) Other works[edit] References[edit]