35 maps that explain how America is a nation of immigrants 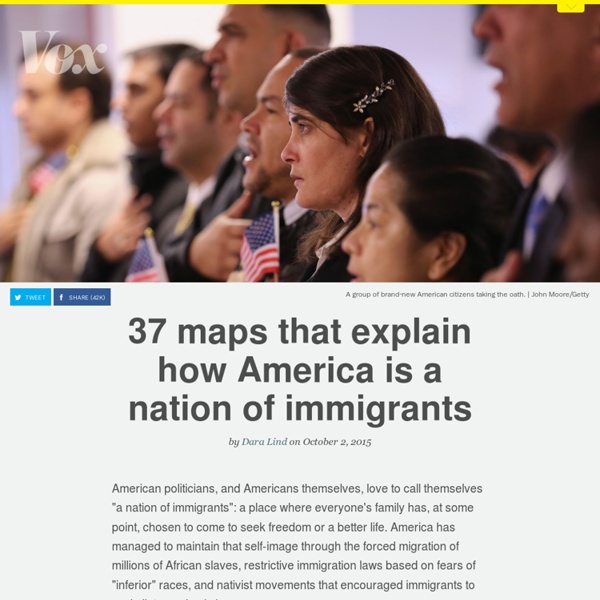 by Dara Lind on October 2, 2015 American politicians, and Americans themselves, love to call themselves "a nation of immigrants": a place where everyone's family has, at some point, chosen to come to seek freedom or a better life. America has managed to maintain that self-image through the forced migration of millions of African slaves, restrictive immigration laws based on fears of "inferior" races, and nativist movements that encouraged immigrants to assimilate or simply leave. But while the reality of America's immigrant heritage is more complicated than the myth, it's still a fundamental truth of the country's history. It's impossible to understand the country today without knowing who's been kept out, who's been let in, and how they've been treated once they arrive. Where we come from We’re all immigrantsThis map from the 2000 census colors each county according to which country most of its residents cite as their "ancestry." Forced migration, then and now A nation of immigrants

The undocumented immigrant population explained, in 7 maps President Obama’s immigration announcement this week shed light on what has become a swelling national problem: the more than 11 million immigrants living, working and establishing families in the United States illegally. His decision to act on his own hardly addresses that whole population or what politicians of all stripes describe as a broken immigration system, but it will nonetheless affect millions. A new report this week from the Pew Research Center offers an updated and varied look at not only where those 11.2 immigrants live, but also how that population has changed. Here’s a look at 7 maps from the Pew report that offer some insight into the immigrant population by state: 1.

Population Lines Print I recently produced a map entitled “Population Lines”, which shows population density by latitude. The aim was to achieve a simple and fresh perspective on these well-known data. I have labelled a few key cities for orientation purposes but I’ve left off most of the conventional cartographical adornments. A gorgeous visualization of 200 years of immigration to the US It's easy now to assume that Mexico has always been among the main sources of immigration to America. But as this wonderful chart by Natalia Bronshtein shows, that's not even close to true. (Natalia Bronshtein)

Discrimination and poor job prospects hit children of immigrants 2/7/2015 - The children of immigrants continue to face major difficulties integrating in OECD countries, especially in the European Union, where their poor educational outcomes leave many struggling to find work, according to a new OECD/EU report. Indicators of Immigrant Integration 2015: Settling In finds that youth with immigrant parents experience nearly 50% more unemployment in the European Union than those with native-born parents. The OECD/EU report presents the first detailed international comparison of the outcomes of immigrants and their children in all European Union and OECD countries. The indicators cover key dimensions of integration, including employment, education, income, housing, health, civic engagement and social cohesion. A special focus is on young people with a migration background.

Bed Quota Fuels 'Inhumane' And 'Unnecessary' Immigrant Detention: Report The private prison industry’s growing role in immigrant detention is due in part to Congress' requiring the federal government to maintain some 34,000 detention beds, according to a report released Wednesday. The report, drafted by Grassroots Leadership, a nonprofit based in Austin, Texas, calls on Congress to eliminate the immigrant detention quota from its 2016 appropriations request. The detention bed mandate was first inserted into the Homeland Security Appropriations Act of 2010. Today, private companies control about 62 percent of the immigrant detention beds used by Immigration and Customs Enforcement, according to the report. That's up from 49 percent in 2009. The rest of the beds are operated by the federal government.

Which countries have the most equal LGBT laws? Mexico has become the latest country to effectively legalise same-sex marriage, after the country’s Supreme Court issued an opinion ruling that it is unconstitutional for states to define marriage as a union only between a man and a woman. It follows last month’s referendum in Ireland, which saw an overwhelming majority vote in favour of amending its constitution to allow gay and lesbian couples to marry. According to the the International Lesbian, Gay, Bisexual, Trans and Intersex Association’s latest report, a total 18 countries around the world now recognise full same-sex marriage, with a further 16 offering another form of union such as a civil partnership. At the other end of the LGBT rights scale, 75 countries still criminalise same-sex sexual acts between consenting adults – down from 92 countries in 2006.

The Courage to Be Undocumented  My senior year in high school was a tough one. My mom suffered a devastating accident, my college dreams were fading away, and I felt like the biggest liar in the world. It was the year 2000, a year before the DREAM Act to provide a path to citizenship for undocumented children was introduced in Congress. A Global Middle Class Is More Promise than Reality From 2001 to 2011, Nearly 700 Million Step Out of Poverty, but Most Only Barely By Rakesh Kochhar Updated August 13, 2015: This new edition includes corrected estimates for Iceland, Luxembourg, the Netherlands and Taiwan, and some related aggregated data. The first decade of this century witnessed an historic reduction in global poverty and a near doubling of the number of people who could be considered middle income. But the emergence of a truly global middle class is still more promise than reality.

Mapping Migration in the United States On Thursday, we published a series of interactive charts showing how Americans have moved between states since 1900. The charts show striking patterns for many states: You can trace the rise of migrant and immigrant populations all along the Southwest, particularly in Texas and Arizona; the influx of New Yorkers and other Northeasterners into Florida starting in the 1970s; and the growth in the Southern share of the Illinois population during the Great Migration. In 1900, 95 percent of the people living in the Carolinas were born there, with similarly high numbers all through the Southeast. More than a hundred years later, those percentages are nearly cut in half.

Visualizing HDI: a fine D3 exemplar This interactive visualisation of Human Development Index values, by country and over time, was released last week. For me, it follows in the mould of The State of Obesity, but is much more transparent in how it is constructed when you look at the source code. That makes it a good exemplar — in fact, perhaps the exemplar currently available — for introducing people to the possibility of making interactive dataviz for their research projects.