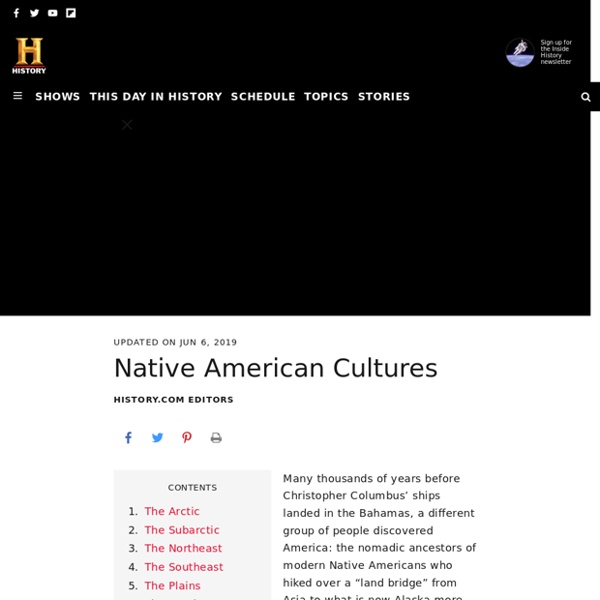 Many thousands of years before Christopher Columbus’ ships landed in the Bahamas, a different group of people discovered America: the nomadic ancestors of modern Native Americans who hiked over a “land bridge” from Asia to what is now Alaska more than 12,000 years ago. In fact, by the time European adventurers arrived in the 15th century A.D., scholars estimate that more than 50 million people were already living in the Americas. Of these, some 10 million lived in the area that would become the United States. As time passed, these migrants and their descendants pushed south and east, adapting as they went. In order to keep track of these diverse groups, anthropologists and geographers have divided them into “culture areas,” or rough groupings of contiguous peoples who shared similar habitats and characteristics. The Arctic The Inuit and Aleut had a great deal in common. The Subarctic The Northeast The Southeast The Plains The Southwest The Great Basin California The Northwest Coast The Plateau

Increasingly, Americans Prefer Going to the Movies at Home The start of the summer blockbuster movie season has Hollywood hoping for the usual stampede to the theaters, but now more than ever, the place that most Americans would rather watch movies is under their own roof. Three-quarters of all adults say they would prefer watching movies at home rather than in a theater, according to a Pew Research Center survey, up from 67% in 1994. The survey finds that more than seven-in-ten adults (71%) watch at least one movie a week, but the great bulk of this viewing occurs at home rather than in a theater.

16 maps that Americans don't like to talk about If there was a single moment when the US became a global power, it was the war with Spain. The Spanish Empire had been crumbling for a century, and there was a ferocious debate within the US over whether America should replace it as a European-style imperial power, or if as a democracy the US should instead liberate peoples from imperialism. The debate centered on Cuba: pro-imperialists wanted to purchase or annex it from Spain (pre-1861, the plan was to turn it into a new slave state); anti-imperialists wanted to support Cuban independence. In 1898, Cuban activists launched a war of independence from Spain, and the US intervened on their side. When the war ended in Spanish defeat, US anti-imperialists blocked the US from annexing Cuba, but pro-imperialists succeeded in passing the notorious Platt Amendment, which placed Cuba under a quasi-imperialist form of indirect control; the US base at Guantanamo Bay is a relic of this arrangement.

Native American Legends (Folklore, Myths, and Traditional Indian Stories) Indigenous languages Native American cultures What's new on our site today! This page is our collection of Native American folktales and traditional stories that can be read online. We have indexed these stories tribe by tribe to make them easier to locate; however, variants on the same native legend are often told by American Indians from different tribes, especially if those tribes are kinfolk or neighbors to each other. Sponsored Links

How to approach teaching gender equality to boys and girls Fatma Özdemir Uluç, who led a British Council-supported study into gender equality in Turkish schools, tells us how teachers can show children that boys and girls are equal. What's the most effective way to talk to adults about gender equality? We start by talking to them about children. Our main argument is that every child has a right to reach their full potential, and gender inequality prevents this by limiting what they can and can't do.

Native American Clashes with European Settlers Native American Clashes with European Settlers Emergence of Tribes By 1600, organized tribes such as the Delaware and Shawnee had moved into present-day West Virginia. In addition, the powerful Iroquois Confederacy began exerting its influence on the region. The Confederacy was an alliance of five Iroquois-speaking nations -- Mohawk, Oneida, Onondaga, Cayuga, and Seneca -- formed in present-day New York in the late 1500s. In 1722, the Tuscaroras joined the Iroquois Confederacy, which became known as the Six Nations.

Battle of the Little Bighorn - Native American History Sitting Bull and Crazy Horse (c.1840-77), leaders of the Sioux on the Great Plains, strongly resisted the mid-19th-century efforts of the U.S. government to confine their people to reservations. In 1875, after gold was discovered in South Dakota’s Black Hills, the U.S. Army ignored previous treaty agreements and invaded the region. This betrayal led many Sioux and Cheyenne tribesmen to leave their reservations and join Sitting Bull and Crazy Horse in Montana.

How can you shop for fashion sustainably? On 24 April 2013, a Bangladeshi garment factory in Dhaka collapsed, killing 1,133 people and injuring more than 2,500. Fashion Revolution Day commemorates the disaster by encouraging consumers to ask 'Who made my clothes?'. The British Council's Kendall Robbins explains why we need a more sustainable approach to fashion. 'Sustainable' fashion means more than hemp sack dresses 'Sustainable' fashion might seem like an unrelatable buzz word that suggests natural-coloured sack dresses made of hemp. This could be the case in some instances, but it's much more than that. The Moundbuilder Myth Debunked The Moundbuilder myth is a story believed, wholeheartedly, by Euroamericans in North America well into the last decades of the 19th and even into the 20th century. The central myth was that indigenous people who lived in what is today the United States were incapable of engineering of the thousands of prehistoric earthworks found by the newcomers and must have been built by some other race of people. That myth served as justification for the plan to exterminate Native Americans and take their property. It was debunked in the late 19th century. Key Takeaways: Moundbuilder Myth

Dawes Act (1887) Approved on February 8, 1887, "An Act to Provide for the Allotment of Lands in Severalty to Indians on the Various Reservations," known as the Dawes Act, emphasized severalty, the treatment of Native Americans as individuals rather than as members of tribes. Federal Indian policy during the period from 1870 to 1900 marked a departure from earlier policies that were dominated by removal, treaties, reservations, and even war. The new policy focused specifically on breaking up reservations by granting land allotments to individual Native Americans. READY LESSONS FOR ADVANCED LEARNERS - CLICK HERE: - New Internationalist Easier English Wiki Advanced learners can, of course, access any of these Easier English articles, and the originals, by themselves, but these Ready Lessons might encourage them to get interested in topics of global justice, or simply provide a structure for a lesson. There are 2 versions of each lesson, ppt - which you can download and then adapt for your class, and pdf: ECONOMICS - Advanced - 2 hrs (from December Issue 488) - speaking, dictation, reading, language extension. Media:Economics.pptx Media:Economics.pdf

The Mashantucket (Western) Pequot Tribal Nation The history of the Mashantucket Pequot Tribal Nation is one of dramatically changing fortunes. Native peoples have continuously occupied Mashantucket in Southeastern Connecticut for over 10,000 years. By the early 17th century, just prior to European contact, the Pequots had approximately 8,000 members and inhabited 250 square miles. However, the Pequot War (1636-1638) -- the first major conflict between colonists and an indigenous New England people -- had a devastating impact on the Tribe. When the Pequot War formally ended, many tribal members had been killed and others placed in slavery or under the control of other tribes. Those placed under the rule of the Mohegans eventually became known as the Mashantucket (Western) Pequots and were given land at Noank in 1651.

Lessons Learned in Teaching Native American History As a white middle school teacher in Oregon attempting to integrate the Native American story in my history lessons, I’ve found that one of the most common misconceptions my students have about American history is thinking that Oregon was empty prior to the Oregon Trail. When I think about my students and their visions of covered wagons journeying into a wilderness with “lots of bears and no people” as one of my students said, I can’t help but wonder about how we as educators are teaching (or not teaching) our students about the rich and vibrant history and cultures of Native Americans. I’ve spoken about this with many educators, and I’ve come to realize the lack of training and resources that teachers have for how to teach Native American history and culture.

QUIZZES - New Internationalist Easier English Wiki Try these quizzes - then look at the links to articles or infographics to check your answers: 1) How much do you know about homelessness? - try this quick quiz with infographic to check the answers: 2) The Internet giants: Facebook, Google and Amazon - how much do you know about them, and how much we use the internet?

Objective: Describe what life was like for Native American tribes before the arrival of Europeans. Quick Tip: Teachers can use this website to help, understand life before European settlement in all parts of the US. by cmallen3 May 1