How To Be Motivated: 4 New Insights From Research 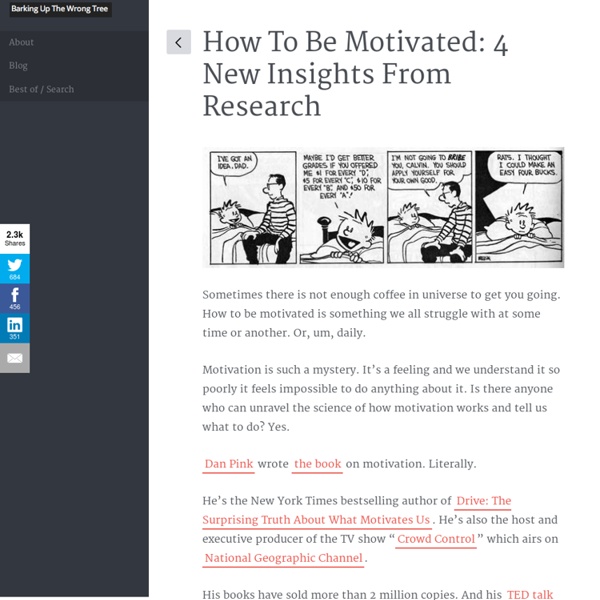 Sometimes there is not enough coffee in universe to get you going. How to be motivated is something we all struggle with at some time or another. Or, um, daily. Motivation is such a mystery. It’s a feeling and we understand it so poorly it feels impossible to do anything about it. Is there anyone who can unravel the science of how motivation works and tell us what to do? Dan Pink wrote the book on motivation. He’s the New York Times bestselling author of Drive: The Surprising Truth About What Motivates Us. His books have sold more than 2 million copies. Here’s what I love about Dan: He’s not the type to write a book and just move on. Here’s what you’ll get from this post: Why you don’t feel motivated.What the research says really produces motivation.The single most motivating thing there is and how to have it in your life.The biggest mistake you’re making when it comes to motivation. Let’s get to it… 1) This Is Why You Don’t Feel Motivated Rewards like money are tricky. Here’s Dan: Autonomy Related:  other items

The Marshmallow Test, “Willpower” and ADHD, Part 1 Oscar Wilde famously said: “I can resist anything but temptation.” In his recent book, The Marshmallow Test: Mastering Self-Control, psychologist Walter Mischel argues that children can be taught to resist temptation—that the ability to delay immediate gratification for the sake of getting something better in the future—is a skill that can be learned. As a psychologist who specializes in working with children and adults who often struggle with motivation and excessive impulsivity, I am writing to suggest that the capacity to resist temptations is not so easily taught nor easily sustained by any of us. Mischel’s famous studies of preschoolers in the 1960s showed that some kids were quite able to resist the temptation to gobble up immediately one marshmallow placed in front of them. They delayed that pleasure so they could get a double portion of the treat simply by waiting a short time until the adult returned to the room. Brain Foundations for Self-Control Part 1 of 2 Image: iStock

40 Quotes that Will Quiet Your Mind post written by: Angel Chernoff Peace does not mean to be in a place where there is no noise, trouble, or hard work. Peace means to be in the midst of all those things and still be calm in your heart. You know how you always turn down the volume on the radio when you need to think clearly about something complicated or confusing? The same is true for your life in general. The noise you need to cut out to concentrate? Turning down the radio refocuses your mind and offers you clarity when you need it most. Now it’s time to apply this same strategy to all the other noise in your life, starting with the noise in your head. Here are 40 quotes gathered from our blog archive that can be used as reminders to help tweak your thoughts and quiet your anxious mind: Reminder: Have you checked out our book? Everything is created twice, first in the mind and then in reality. Your turn… If you enjoyed this article, check out our new best-selling book.

Why Behavior Change Apps Fail to Change Behavior Imagine walking into a busy mall when someone approaches you with an open hand. “Would you have some coins to take the bus, please?” he asks. But in this case, the person is not a panhandler. As part of a French study, researchers wanted to know if they could influence how much money people handed to a total stranger using just a few specially encoded words. The turn of phrase has been shown to not only increase how much bus fare people give, but was also effective in boosting charitable donations and participation in voluntary surveys. What were the magic words the researchers discovered? The “but you are free” technique demonstrates how we are more likely to be persuaded when our ability to choose is reaffirmed. Wanna and Hafta Dr. At this year’s D.I.C.E Summit, Schell said the difference comes down to whether the behavior is a “wanna” versus a “hafta.” Furthermore, Schell believes maintaining a sense of autonomy is critical to enjoying an experience. Why Choice Works Counting Calories

How to Beat Procrastination This is Part 2. You won’t get Part 2 if you haven’t read Part 1 yet. Here’s Part 1. PDF: We made a fancy PDF of this post for printing and offline viewing. pro-cras-ti-na-tion |prəˌkrastəˈnāSHən, prō-| nounthe action of ruining your own life for no apparent reason Let me start by saying that I’ve had just about enough of the irony of battling through crippling procrastination while trying to write posts on procrastination and how to beat it. A couple notes before we begin: I’m not a professional at any of this, just a lifelong procrastinator who thinks about this topic all the time. Alright, so last week we dove into the everyday inner struggle of the procrastinator to examine the underlying psychology going on. We know about the Instant Gratification Monkey (the part of your brain that makes you procrastinate) and his dominion over the Rational Decision Maker, but what’s really happening there? The procrastinator is in the bad habit, bordering on addiction, of letting the monkey win.

Why Behavior Change Apps Fail to Change Behavior On the other hand Fitocracy, another health app, approaches behavior change very differently. The goal of the app is similar to its competitors – to help people establish better diet and exercise routines. However, the app leverages familiar “wanna” behaviors instead of “haftas” to keep people on track. At first, the Fitocracy experience is similar to other health apps, encouraging new members to track their food consumption and exercise. But where Fitocracy differentiates itself is in its recognition that most users will quickly fall off the wagon, just as I had with MyFitnessPal, unless the app taps into an existing behavior. Before my reactance alarm went off, I started receiving kudos from other members of the site after entering-in my very first run. I haven’t used Fitocracy for long, but it’s easy to see how someone could get hooked.

7 Critical Skills That Predict Success What skills do you really need to succeed? In school, they taught us history and algebra and if we got good SAT scores they said we'd succeed. But are those the skills we really need? Developmental psychologist Susan Engel researched the skills that actually predicted success. I'll give you a hint--differential calculus isn't on the list. Here are the 7 skills that are critical for success. 1. Of course, you can read. I'd like to ask a different question: Do you read? 2. If you're running a startup, you probably already have this skill down. Are ideas encouraged? 3. Sometimes we get focused on the solution we think is right, and we forget that there are many different angles for looking at each problem. Have you really looked at your decisions from all sides? 4. Engel identifies conversation as a way that children gain not only the ability to communicate, but also pegs it as a way that children actually learn. 5. Are you working together with others, or simply directing their work? 6.

How To Motivate People - 4 Steps Backed By Science Employees, spouses, kids — what does it take to get people motivated so you don’t have to nag them? Motivation is powerful. It predicts success better than intelligence, ability, or salary. Via The 100 Simple Secrets of Successful People: When tested in national surveys against such seemingly crucial factors as intelligence, ability, and salary, level of motivation proves to be a more significant component in predicting career success. I’ve covered persuasion, leadership, improving habits and fighting procrastination but what’s it take to get others to really give their best? 1) Stop Bribing Them When actors would ask the great film director Alfred Hitchcock “What’s my motivation?” Rewards definitely work. Researchers find that perceived self-interest, the rewards one believes are at stake, is the most significant factor in predicting dedication and satisfaction toward work. But as Dan Pink explains in Drive: The Surprising Truth About What Motivates Us there’s a problem with this equation: