Why the Lean Start-Up Changes Everything 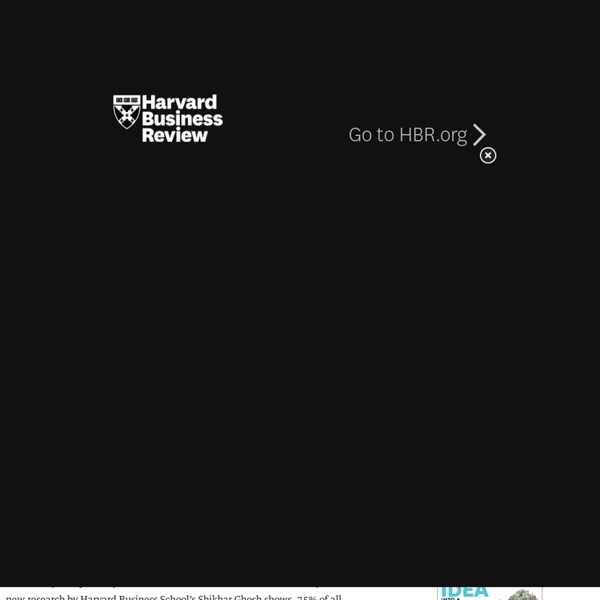 Launching a new enterprise—whether it’s a tech start-up, a small business, or an initiative within a large corporation—has always been a hit-or-miss proposition. According to the decades-old formula, you write a business plan, pitch it to investors, assemble a team, introduce a product, and start selling as hard as you can. And somewhere in this sequence of events, you’ll probably suffer a fatal setback. The odds are not with you: As new research by Harvard Business School’s Shikhar Ghosh shows, 75% of all start-ups fail. But recently an important countervailing force has emerged, one that can make the process of starting a company less risky. It’s a methodology called the “lean start-up,” and it favors experimentation over elaborate planning, customer feedback over intuition, and iterative design over traditional “big design up front” development. The lean start-up movement hasn’t gone totally mainstream, however, and we have yet to feel its full impact. 1. 2. 3. 1. 2. 3. 4. 5.

How Finland is solving the gender gap in science education The Meretniemi family of Finland are preparing to set off on a tour to 75 countries on a boat on which they have installed a digital system, in order to introduce their country's education system to the world. Photo credit: Yunus Icen/Anadolu Agency/Getty Images Israel Finland is the only country in the world where more girls perform better at science than boys. Here, we ask experts what other countries can learn from Finland If you care about increasing the number of women who pursue scientific careers, you need to read up on an important news item from last week. How coding could be the next Spanish class in Florida high schools - Tampa Bay Business Journal The proposed bill would allow Florida high schools to offer coding courses as a foreign… more scyther5 Florida high school students could soon ditch Spanish class in favor of computer coding. State Sen. Jeff Brandes (R-St. Petersburg) filed a bill Monday that would allow students to take two computer coding classes in lieu of foreign language requirements currently in place.

Researchers analyze gender gaps in STEM employment Less than 25 percent of science, technology, engineering and math — or STEM — jobs are held by women, according to the U.S. Department of Commerce. Researchers at UT, Cornell University and Syracuse University set out to analyze this gender gap. Their study, which was published Sept. 28 in Social Science Research, found that while many women study STEM fields, they disproportionately study fields such as life sciences, which provide fewer jobs than fields such as computer science and engineering. The study also reported that, unlike men, women are not seen as more valuable if they delay marriage and children.

Minimum Viable Product: a guide One of the most important lean startup techniques is called the minimum viable product. Its power is matched only by the amount of confusion that it causes, because it's actually quite hard to do. It certainly took me many years to make sense of it. I was delighted to be asked to give a brief talk about the MVP at the inaugural meetup of the lean startup circle here in San Francisco.

FACT SHEET: A Year of Action Supporting Computer Science for All “…we have to make sure all our kids are equipped for the jobs of the future – which means not just being able to work with computers, but developing the analytical and coding skills to power our innovation economy.” President Obama, Weekly Address, January 30, 2016. There are half a million open technology jobs in the United States today, and that number is projected to more than double within the next 4 years. These jobs pay 50 percent more than the average private-sector job.

Salsify Launches STEM Education Program in Boston Public School District BOSTON, Dec. 7, 2016 /PRNewswire/ -- Salsify today launched a STEM education program to help increase diversity and ensure a strong pipeline of local STEM workers from underserved schools in Boston. The local tech company is dedicated to offering early exposure in the fields of science, technology, engineering and math in order to help shape tomorrow's technology leaders and work toward closing the ever-growing skills gap in these fields. On Dec. 9, Salsify will kick off an ongoing series of events with Boston area students, hosting more than 20 middle school students from South Boston's Oliver Hazard Perry School for a day of hands-on learning. They'll be working alongside members of Salsify's engineering, sales and marketing teams to design, build and present prototypes of their own problem-solving software. Salsify ran a successful pilot of its new educational program over the summer for 40 middle school girls with STEM-certified middle school teacher Andrea Roda. About Salsify

Opening Doors to Computer Science High school junior Chris Cardona is certain that he wants to be a computer game designer one day. As he talks about his future, his hands move across a keyboard, directing small pieces of code around a computer screen. He narrates as he builds. “I used to play games, and I was always interested in how I could make that game for myself, and how to make it my way,” he says. “I want the game to be done in a way where everything looks nice, everything works well.” 20 Product Prioritization Techniques: A Map and Guided Tour Prioritization is a top concern for most Product Managers. It’s by far one of the most popular topics on PM blogs, Q&A sites and other online communities. Although it’s not what we are hired to do, it’s something that we have to do to achieve our real goal: creating successful products that bring value to our customers and to the business. The need to prioritize comes from a very simple fact: we just don’t have enough resources to work on everything we can come up with. Thus, we need a process to determine the sets (and sequence) of things that should be done on the product to deliver the most value at each point in time, given our constraints. If we break this statement down, a core group of questions then need to be answered:

/ * CODE SAVVY * /: Organizations Organizations dedicated to code-savvy education. Mostly self described. What's missing? Let us know and we'll add it. Apps to Empower www.appstoempower.org a contest (Deadline April 30, 2013) that seeks to discover and showcase innovative tablet applications that help young women and girls become leaders, resolve conflicts, be mentored, find work, become entrepreneurs and realize their full potential through education. must be 18 or older to enter. Black Girls Code www.blackgirlscode.org teaches girls ages 7-16 from underrepresented communities about computer programming and digital technology. Diversity in Tech: Latino Startup Alliance, Black Girls Code Launching STEM Program for Latinas The lack of diversity in Silicon Valley has been a topic of concern recently, as large tech companies Google, Yahoo, LinkedIn and, most recently, Facebook release not-so-stellar diversity statistics. One thing has become clear from the recent influx of diversity reports from these companies (each of which deserves credit for at least starting the conversation): White men rule Silicon Valley. In an attempt to jumpstart diversity in tech -- as well as to give 1,000 young girls of color an amazing head start toward their careers -- the Latino Startup Alliance and Black Girls CODE have teamed up to raise money for an initiative called La TechLa. The program seeks to help chip away at Silicon Valley's distinct lack of women and black and Hispanic minorities by teaching young girls of color about coding and the power of technology. That means only five days are left, but 50 people have funded the project, and the goal is very close. (Photo : Indiegogo: La TechLa)