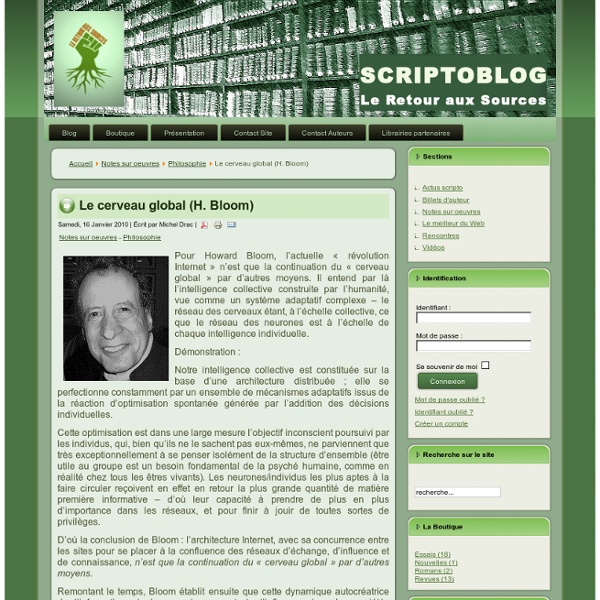 The Global Brain The Global Brain Video The video of the book has become even more well-known than the book itself. This groundbreaking presentation is now available on DVD. It can also be watched as a video stream on this site. In The Global Brain Peter Russell shows that humanity has reached a crossroads in its evolutionary path. The Internet is linking humanity into one, worldwide community - a "global brain". This, combined with a rapidly growing spiritual awakening, is creating a collective consciousness that is humanity's only hope of saving itself from itself. Selling more than 100,000 copies and translated into ten languages, his seminal work, The Global Brain, won acclaim from forward thinkers worldwide. Peter Russell, who holds advanced degrees in theoretical physics, experimental psychology and computer science, makes no apologies for presenting what may seem like a Utopian theory.

Beyond the Supercomputer: Social Groups as Learning Machines “Enthralling. Astonishing. Written with the panache of the Great Blondin turning somersaults on the rope above Niagara. Profound, extraordinarily eclectic, and crazy. The most exciting cliffhanger of a book I can remember reading.” “Truly awesome. “Bloody hell…What a truly extraordinary book. “Is The God Problem a great book like Darwin’s The Origin Of Species, Lyell’s Principles Of Geology, or Newton’s Principia Mathematica?” “Deep, provocative, spectacularly well written…great.” “Strong…like a STEAM ROLLER…impressive…great.” “Great literature.” “Incandescent…shakes out like shining from shook foil and oozes to a greatness,” George Gilder, author, Wealth and Poverty, winner of the White House Award for Entrepreneurial Excellence “The greatest f**king book ever written. “Mind-bending.” “Ebullient, enthralling.” “Utterly extraordinary.” “Thrilling.” “A ‘page-turner’.” Tiamut, the Mesopotamian salt-water goddess of chaos,provides two clues to the God Problem. “Infectious.” “Genius.”

Quantum Shift in the Global Brain Quantum Shift in the Global Brain Book: Ervin László. Quantum Shift in the Global Brain David Lorimer: "In a series of books published over the last ten years, Ervin László has refined and extended his understanding of our predicament. In this book, he examines the possibility of what he calls a “quantum shift in the global brain”, defining the global brain as the “quasi energy- and information-processing network created by six-and-a-half billion humans on the planet” interacting on many levels. A quantum shift in the global brain is a “sudden and fundamental transformation in the relations of a significant segment of the six-and-a-half billion humans to each other and to Nature”– what he calls a “macroshift”, not only in society but also in our understanding of the nature of reality through a paradigm shift in science. We all recognise that global problems demand global solutions, but there lurks a danger that the solutions will be imposed from above rather than evolving from below.

Expert opinions on Howard Bloom's book Global Brain Expert opinions on Global Brain The Evolution of Mass Mind From the Big Bang to the 21st Century And on its author, Howard Bloom “A modern-day prophet, Bloom compels us to admit that evolution is a team sport. “This lusty tome generated by Bloom’s voracious reading habit and extraordinary talent for explanation proclaims that from people to vervet monkeys to bacteria—organize themselves, create novelty, alter their surroundings, and triumph to leave more offspring than . "I have met God and he lives in Brooklyn. “In a superbly written and totally original argument, Howard Bloom continues his one-man tradition of tackling the taboo subjects. "A fascinating new evolutionary theory which could deeply change our view of life, and a new worldview which could radically change our interpretation of social structures." " is wonderful! photo by Howard Bloom "Howard Bloom has a fascinating vision of the interplay of life, and a compelling style which I found captivating." "Stunning! </u>*}

World Brain: The Idea of a Permanent World Encyclopaedia Contribution to the new Encyclopédie Française, August, 1937 It is probable that the idea of an encyclopaedia may undergo very considerable extension and elaboration in the near future. Its full possibilities have still to be realized. Concurrently with these realizations there is a growing discontent with the part played by the universities, schools and libraries in the intellectual life of mankind. Both the assembling and the distribution of knowledge in the world at present are extremely ineffective, and thinkers of the forward-looking type whose ideas we are now considering, are beginning to realize that the most hopeful line for the development of our racial intelligence lies rather in the direction of creating a new world organ for the collection, indexing, summarizing and release of knowledge, than in any further tinkering with the highly conservative and resistant university system, local, national and traditional in texture, which already exists.

Reference: World Brain Review Original Source Online World Brain: The Idea of a Permanent World Encyclopaedia H.G. Wells The whole human memory can be, and probably in a short time will be, made accessible to every individual. As We May Think Vannevar Bush Professionally our methods of transmitting and reviewing the results of research are generations old and by now are totally inadequate for their purpose. Our ineptitude in getting at the record is largely caused by the artificiality of systems of indexing. Presumably man’s spirit should be elevated if he can better review his shady past and analyze more completely and objectively his present problems. Towards the World Brain Eugene Garfield The intellectual seeds of the World Wide Web were disseminated by Eugene Garfield with these early Current Contents essays. World information centers are badly needed. Phi Beta Iota: Dr. G. Gottfried Meyer-Kress Willis Harman, Global Mind Change: The Promise of the 21st Century . Robert Steele Web of Fragmented Knowledge

The global brain: the evolution of the mass mind from the big bang to the ... - Howard K. Bloom - Google Books Review: Global Brain–The Evolution of Mass Mind from the Big Bang to the 21st Century Amazon Page 5 out of 5 Stars Live and Let Die Group Dynamics, Bacteria Are Winning July 13, 2001 Very very few books actually need to be read word for word, beginning with the bibliography and ending with the footnotes. This is one of those books. I like this book and recommend it to everyone concerned with day to day thinking and information operations. There are a number of vital observations that are relevant to how we organize ourselves and how we treat diversity. 1)The five major elements of global inter-species and inter-group network intelligence are the conformity enforcers; the diversity generators; the inner-judges; resource shifters; and inter-group tournaments. 2) Bacteria have extraordinary strategies for rapid-fire external information collection and exchange, quick-paced inventiveness, and global data sharing. 3) Imitative learning, while beneficial in general, can be extremely hazardous to inventiveness and adaptation. 7) Language as well as culture are killers of thought.