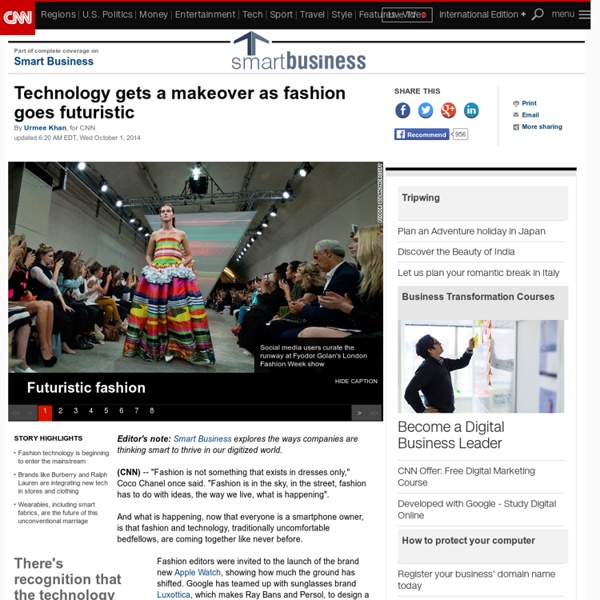 Social media users curate the runway at Fyodor Golan's London Fashion Week show An interactive garment created by Nokia Lumias became the world's first interactive smart skirt Celebrities including Alexa Chung and Pixie Geldof whip out their smartphones on the front row at London Fashion Week Apple launched its smart watch in September, allowing users to call and message friends with a click on the device Ralph Lauren's biometric shirt tracks your body's data before sending it to your smartphone Google Glass is often credited as the trailblazer of wearable tech, and the product has since been adopted by designer Diane von Furstenberg Jawbone Up tracks weight and fitness through its wristband and smartphone app, helping to integrate health management into your daily routine Fitbit has proved to be one of the most popular wearable creations, helping to fuse the gap between fashion and technology. Futuristic fashion "We have become better online than in stores.

London fashion week: why technology is in fashion At London fashion week the multibillion dollar worlds of tech and fashion are colliding like never before. For many, the launch of Apple’s new watch, announced this week with impeccable timing to coincide with the global fashion weeks, will mark an important turning point for fashion tech, a new sector with huge potential for growth. While Apple’s entry into the market is almost guaranteed to boost the industry’s profile, in reality the fashion industry has been driving fashion tech for years. Fashion tech is much more than just tech inside a timepiece, and nowhere is this more apparent than in London.

Fashion Mannequins Transformed Through 3D Printing To chat to Paul Sohi is to geek out over all things 3D printed. He takes me on a journey from 3D printed mannequins (the subject of his PhD) to a new polycarbonate composite prosthetic leg he is developing with a team spanning half a dozen countries but centred at Autodesk in San Francisco, for an Olympic cyclist bound for Rio later this year. It’s a helluva ride, so buckle up! What initially prompted me to get in contact with Paul was a question I’ve been pondering whilst working at the fringe of fashion and technology for some time. The tech we were wearing before wearable tech At first glance, the building blocks of our wardrobes have barely changed in the last hundred years – or have they? The still-pervasive use of synthetic fabrics, cotton and animal skin may suggest we’re cut from the same cloth, but technology is being ingrained in the DNA of our clothing like never before. Technical fabrics – pervasive on the runway – provide the starting point for clothes that will eventually compute. Much like “selfie” and “GIF” before it, the term “wearables” is on the fast-track to becoming the zeitgeisty, OED-approved word of the year. 2014 has seen it take on new life at an alarming rate: Google Glass, the smart eyewear derided for looking like something a long-sighted android dreamt up, is proudly on sale at Net-a-Porter. Meanwhile, the highly-anticipated Apple Watch had a launch during Paris Fashion Week, with model Liu Wen’s attendance sparking rumours that she could be the product’s new stylish face.

Wearable devices: where fashion and technology collide With the launch of Samsung's Galaxy Gear and Google's Glass this year, wearable technology has reached a turning point. These devices may not look like fashion items, but they are simply the starting point for the wearable technology revolution which is set to sweep both the technology and fashion industries. O2 recently unveiled a series of designer handbags that double as phones as part of a project that illustrates the possibilities of gadget recycling. While these pieces are a light-hearted take on the category of wearable technology, they illustrate how the whole notion of wearable technology is growing. "The key to good product design is having a need for something, not creating something because you can," said designer Sean Miles, who created the bags.

Smart Clothes Are The Future of Wearables Get this crap off of my wrist. Why are we so fixated on watches and bands? The wearable tech market is full of fitness-obsessed products for workout-loving people with thick wrists and deep pockets. No one in the industry wants to admit it, but the wrist is probably not the best place to stick a bunch of sensors, and activity tracking may not even be the best use for all those sensors. If we want wearables to become truly wearable, companies need to start looking at the clothes we wear every day of our lives. "Technology is going to turn the entire fashion industry inside out" Fashion and technology: the digital revolution presents the "biggest challenge for fashion brands" according to digital fashion pioneer Francis Bitonti who asks: "How will an industry where value is communicated by exclusivity and craft cope with this new space?" (+ interview) The fashion industry has been slow to adapt to new technologies, says Bitonti, who warned: "Fashion brands are going to have to adapt to this, which is going to mean a shift in core values for many brands." The New York-based designer initially trained as an architect but has recently focussed on applying advanced manufacturing techniques to fashion, jewellery and accessories, including a 3D-printed dress for Dita von Teese and a pair of 3D-printed shoes.

Can a hashtag change the fashion industry? Now in its second year, Fashion Revolution Day (FRD) is a hashtag campaign designed to keep the most vulnerable in the fashion supply chain in the public eye. Held on the anniversary of the Rana Plaza factory collapse in Bangladesh, participants are encouraged to take a selfie showing the label on their clothes and ask the designer or brand #whomademyclothes. It’s an important cause, but can a hashtag campaign really bring meaningful change to the fashion industry? Ruth Stokes, author of The Armchair Activist’s Handbook, says if a campaign is able to raise awareness and reach people otherwise not engaged, then it has provided something of value. The challenge is translating that increased awareness into real-world practical actions, whether that means changing individual behaviors or the laws made by politicians. FRD has changed the hashtag this year to #whomademyclothes after Pixar took over #insideout in anticipation of the Disney animation film Inside Out.

​How "smart mirrors" are boosting clothing sales Fitting rooms haven't exactly kept up with the times. Many are dingy, with bad lighting that makes almost anyone look worse for wear. But a new twist on the old fitting room basic is changing the way people shop for clothing, with upscale retailers finding so-called "smart mirrors" are actually boosting sales. The mirrors take videos and photos of shoppers in new outfits, allowing the consumers to compare side-by-side images of which ensemble is most flattering. Neiman Marcus, for one, is testing smart mirrors from maker MemoMi in three locations: Walnut Creek, California; San Francisco and Willow Bend, outside of Dallas. The mirrors, which were developed in a top-secret innovation lab in Dallas, are located out on the selling floor, rather than inside the dressing rooms, because of concerns about privacy.

How technology has changed student life Going back to my family dinner, and chatting about university life, it didn't take too long for the phrase "you kids have it so much easier these days" to feature. But, to be completely fair on my mother, she has a valid point. While we still have all the same educational benefits as those of the previous generation, we have so many more as well.