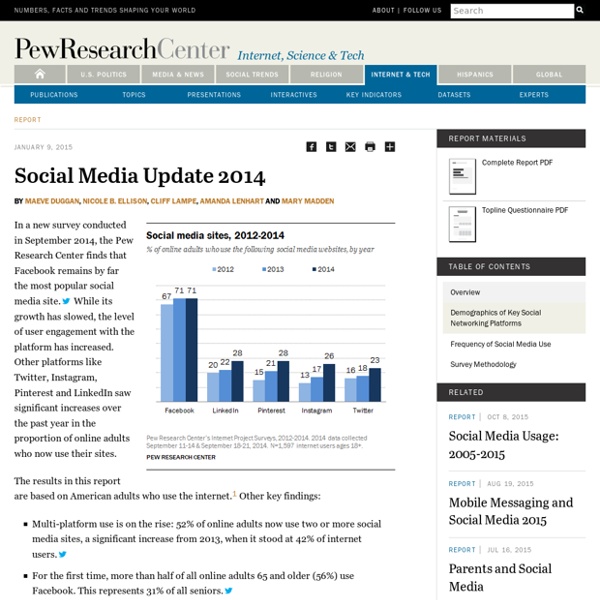 Social Media and the ‘Spiral of Silence’ A major insight into human behavior from pre-internet era studies of communication is the tendency of people not to speak up about policy issues in public—or among their family, friends, and work colleagues—when they believe their own point of view is not widely shared. This tendency is called the “spiral of silence.” Some social media creators and supporters have hoped that social media platforms like Facebook and Twitter might produce different enough discussion venues that those with minority views might feel freer to express their opinions, thus broadening public discourse and adding new perspectives to everyday discussion of political issues. We set out to study this by conducting a survey of 1,801 adults. It focused on one important public issue: Edward Snowden’s 2013 revelations of widespread government surveillance of Americans’ phone and email records.

Teens, Social Media & Technology Overview 2015 24% of teens go online “almost constantly,” facilitated by the widespread availability of smartphones. Aided by the convenience and constant access provided by mobile devices, especially smartphones, 92% of teens report going online daily — including 24% who say they go online “almost constantly,” according to a new study from Pew Research Center. More than half (56%) of teens — defined in this report as those ages 13 to 17 — go online several times a day, and 12% report once-a-day use.

Social Isolation and New Technology Overview This report adds new insights to an ongoing debate about the extent of social isolation in America. A widely-reported 2006 study argued that since 1985 Americans have become more socially isolated, the size of their discussion networks has declined, and the diversity of those people with whom they discuss important matters has decreased. In particular, the study found that Americans have fewer close ties to those from their neighborhoods and from voluntary associations.

Mobile Messaging and Social Media 2015 In today’s world, people — particularly young people — are continually finding and adapting new ways of communicating electronically to fit their needs. Case in point: 2015 marks the first time Pew Research Center has asked specifically about mobile messaging apps as a separate kind of mobile activity apart from cell phone texting. And already, according to a new survey, 36% of smartphone owners report using messaging apps such as WhatsApp, Kik or iMessage, and 17% use apps that automatically delete sent messages such as Snapchat or Wickr. Both of these kinds of apps are particularly popular among young adults. Half (49%) of smartphone owners ages 18 to 29 use messaging apps, while 41% use apps that automatically delete sent messages.

The revolution that’s changing the way your child is taught The video does not seem remarkable on first viewing. A title informs us that we are watching Ashley Hinton, a teacher at Vailsburg Elementary, a school in Newark, New Jersey. Hinton, a blonde woman in a colourful silk scarf, stands before a class of eight- and nine-year-old boys and girls, almost all of whom are African-American. “What might a character be feeling in a story?” she asks. Digital, Social & Mobile Worldwide in 2015 2014 was a landmark year for growth across all things digital, and We Are Social’s new Digital, Social and Mobile in 2015 report indicates that this year will see even more impressive numbers. Including stats for more than 240 countries around the world, and profiling 30 of the world’s biggest economies in detail, this report is the most comprehensive, free compendium of up-to-date digital statistics and data you’ll find. So what do its 376 pages reveal? The Headlines

The Best Social Media Monitoring Tools Is it just me or does it seem like the older you get the less time there is in the day to breathe let alone deal with life and business? (*sigh*) Well, as if life couldn’t get busy enough, if you’re an online entrepreneur, then your life has the added task of Social Media. Ah… Social Media. It’s something many of us hate to love and love to hate, am I right? In this day and age, Social Media is massive and massively important for connecting with your audience and making it easy for them to connect with you and recommend you to others with similar interests.

A Beautiful Visual on How Technology Is Transforming 21st Century Education March 14, 2015 Technology is radically transforming the education landscape.The technological innovations and digital progress that marked the last two decades have brought a massive change in the ways education is being conceptualized and delivered, bigger than anytime in the history of mankind. Pessimists would call it technological determinism but we see it as a new window of opportunity into the vast horizon of learning. According to “Bringing Our Schools into The 21st Century Infographic”, some of the opportunities provided by technology for education include: High speed connectivity which will enable a wider access to the netCloud based storage capabilities which will, among others, help develop a professional educational culture, enhance communication and improve knowledge sharing.Digital portfolios will be commonplace among students.