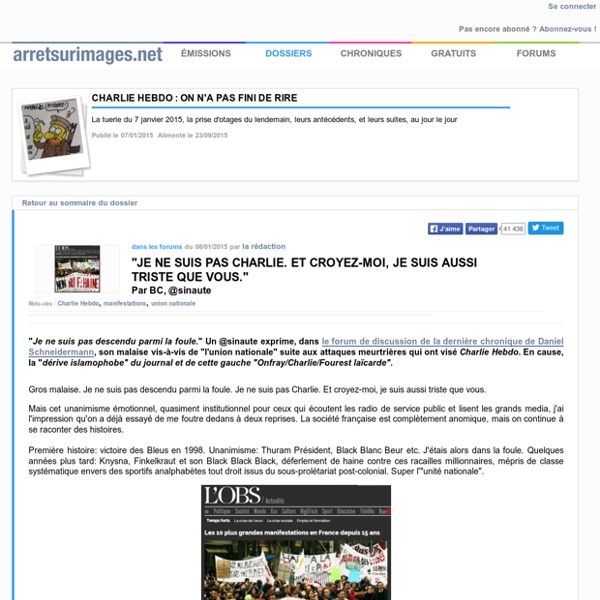 Je ne suis pas Charlie! What I have to say today is, well, very likely to be unpopular. But I'm worried by what I'm seeing online - Facebook, Twitter, blogs, news websites, youtube. I'm talking about the rise of the "Je suis Charlie" hashtag. As you may have guessed from the title of this post, I take issue with this rhetoric, and I'm going to outline my case below. To begin, let me be clear that I do not support the use of violence against unarmed civilians. On Charlie Hebdo: A letter to my British friends Dear friends, Three days ago, a horrid assault was perpetrated against the French weekly Charlie Hebdo, who had published caricatures of Mohamed, by men who screamed that they had “avenged the prophet”. A wave of compassion followed but apparently died shortly afterward and all sorts of criticism started pouring down the web against Charlie Hebdo, who was described as islamophobic, racist and even sexist. Countless other comments stated that Muslims were being ostracized and finger-pointed.

​The Future of Terrorism According to VICE Photo via Flickr user US Army Garrison Yongsan When it comes to the future of terrorism, there's good news and there's bad news. And it's mostly bad. On Charlie Hebdo Supporters of the French far-right National Front party rally in Paris last May. Pierre Andrieu / AFP / Getty Images Many journalists at the offices of Charlie Hebdo have been murdered by bampots brandishing what appear to be machine guns at close range. It is too soon to have a complete, coherent political narrative of these killings. All one can have at this point are the correct but platitudinous points about there being no justification for this, that all attacks on journalists are abhorrent, that freedom of speech must be defended to the last drop of blood, and so on. If you really need that sermon, you’re in the wrong place.

One Tweet Perfectly Sums Up the Big Problem With How We Talk About Terrorism If a terrorist attack took place right here in the U.S., why isn't it a national story? Terrorism may be defined as "the use of violence and threats to intimidate or coerce, especially for political purposes," but if you asked most people, the term conjures one image: brown people with beards and bombs. Nothing has made that profoundly racist misunderstanding clearer than the news coverage of two violent attacks that happened within roughly 24 hours.

The Paris Attack: Je Ne Suis Pas Charlie All around the world people are standing up in solidarity with the victims of the Charlie Hebdo massacre. While some people are crying for free speech, others – particularly anti racists, victims of sexual abuse, feminists, and religious groups – are more hesitant to lend solidarity to people who have made a business out of mocking their struggles. Charlie Hebdo supporters are in many cases people who would have condemned and looked down their noses at these offensive comics had there been no massacre.

Noam Chomsky : We Are All – Fill in the Blank The world reacted with horror to the murderous attack on the French satirical journal Charlie Hebdo. In the New York Times, veteran Europe correspondent Steven Erlanger graphically described the immediate aftermath, what many call France’s 9/11, as “a day of sirens, helicopters in the air, frantic news bulletins; of police cordons and anxious crowds; of young children led away from schools to safety. It was a day, like the previous two, of blood and horror in and around Paris.” The enormous outcry worldwide was accompanied by reflection about the deeper roots of the atrocity.

THE OPTIMAL SIZE OF A TERRORIST NETWORK Distributed, dynamic terrorist networks cannot scale like hierarchical networks. The same network design that makes them resiliant against attack puts absolute limits on their size. If so, what are those limits? In the Wake of Charlie Hebdo, Free Speech Does Not Mean Freedom From Criticism On Wednesday morning, the French satirical paper Charlie Hebdo was attacked by three masked gunmen, armed with kalashnikovs, who stormed the building and killed ten of its staff and two police officers. The gunmen are currently understood to be Muslim extremists. This attack came minutes after the paper tweeted this drawing of ISIS leader Abu Bakr Al-Baghdadi. (“Best wishes, by the way.” Baghdadi: “And especially good health!”)