In the Wake of Charlie Hebdo, Free Speech Does Not Mean Freedom From Criticism 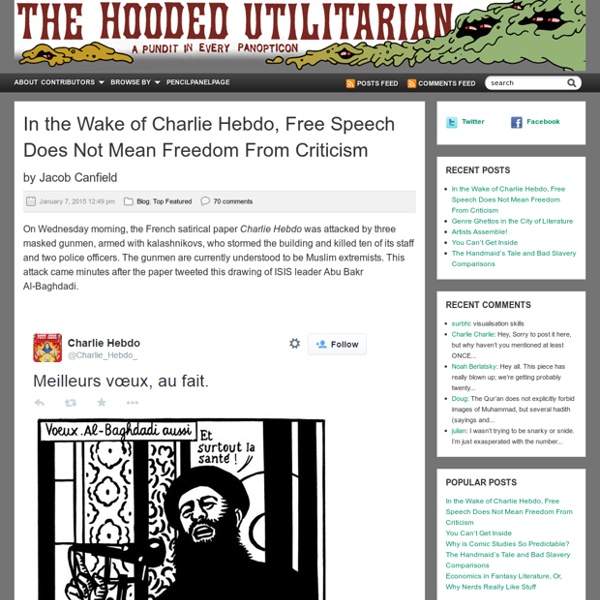 On Wednesday morning, the French satirical paper Charlie Hebdo was attacked by three masked gunmen, armed with kalashnikovs, who stormed the building and killed ten of its staff and two police officers. The gunmen are currently understood to be Muslim extremists. This attack came minutes after the paper tweeted this drawing of ISIS leader Abu Bakr Al-Baghdadi. (“Best wishes, by the way.” Baghdadi: “And especially good health!”) An armed attack on a newspaper is shocking, but it is not even the first time Hebdo has been the subject of terrorist attacks. In the face of such an obvious attack on free speech, voicing anything except grief-stricken support is seen by many as disrespectful. When faced with a terrorist attack against a satirical newspaper, the appropriate response seems obvious. In this case, it is the wrong response. Here’s what’s difficult to parse in the face of tragedy: yes, Charlie Hebdo is a French satirical newspaper. A call “TO ARMS” is gross and inappropriate.

BattyMamzelle: For Feminists Who Resort To Racism When Slut Shaming Is Not Enough White Feminists, we need to have a chat about this unruly beast we call feminism, and the intersection of race and sexuality. I like to assume that you mean well, but you've been fucking up quite a bit in the last few months, and I think it's my duty as your presumptive sister-in-arms to do some minor course correcting for all our sakes. Beyoncé has been Beyoncé-ing for over a year now and you're still questioning her feminist credentials because her praxis doesn't match yours. Nicki Minaj has been vocal about her feminism for years but you revoked her credentials because she made a video about her exquisitely crafted rear end and rapped about the men who want to fuck her. To me, all that debate sounded a lot like judgement of other women for the way they chose to express their sexuality.

The fightback against gendered toys Three years ago, while she was on maternity leave, Ros Ball and her partner, James, began a diary of their children's lives. Their daughter Josie was three and their son Clem three months old. They wanted to record the moments when their children were made aware of gender stereotypes; when they were directed towards a view of the world in which girls and boys inhabit separate, rigid spheres of pink and blue – the first sphere passive, pretty and gentle, the second aggressive, active and strong. I’m Glad I’m a Boy! I’m Glad I’m a Girl! by Maria Popova “Boys fix things. Girls need things fixed.” The 39 Most Iconic Feminist Moments of 2014 In 1998, Time magazine declared feminism dead. Nearly 15 years later, it wondered if instead, perhaps feminism should be banned. Constantly on attack from all sides, feminism has spent the past few decades proving its importance and relevance over and over and over again. If there's one thing history has taught us, it's that the backlash against feminism will always be a measure of our success. That's the thing with progress — it is perceived as a threat by those too weak to embrace it. Indeed, it's clear 2014 was a historic one for feminism.

Jennifer Lawrence? Emma Watson? These aren't the feminists you're looking for Recently, a young woman asked me how we can make feminism more accessible to men. I told her that I don’t care about making feminism more accessible to men. In truth, I don’t care about making feminism more accessible to anyone. I care about making the liberties that men enjoy so freely fully accessible to women, and if men or celebrities claiming feminism for themselves has become the spoon full of sugar to make that medicine go down, so be it. But it irks me that we more easily embrace feminism and feminist messages when delivered in the right package – one that generally includes youth, a particular kind of beauty, fame and/or self-deprecating humour. It frustrates me that the very idea of women enjoying the same inalienable rights as men is so unappealing that we require – even demand – that the person asking for these rights must embody the standards we’re supposedly trying to challenge.

Laverne Cox: "I Absolutely Consider Myself a Feminist" We talked about you being now one of the most famous transwomen in the world. Do you feel pressure to shed light on certain topics? What topics does the general public most need help with understanding? Yes, I feel pressure. My First Name Ain’t Baby: ‘Hey Baby’ and Street Harassment I heart NY. I really, truly do. However, when I leave to return to school in late August, I know I’ll breathe a sigh of relief. The Next American Revolution: Sustainable Activism for the Twenty-First Century - Grace Lee Boggs "Reading Grace Lee Boggs helps you glimpse a United States that is better and more beautiful than you thought it was. As she analyzes some of the inspiring theories and practices that have emerged from the struggles for equality and freedom in Detroit and beyond, she also shows us that in this country, a future revolution is not only necessary but possible." --Michael Hardt, co-author of "Commonwealth" "This groundbreaking book not only represents the best of Grace Lee Boggs, but the best of any radical, visionary thinking in the United States.