There Were Too Many Deer In The Forest. So They Unleashed The Wolves Without Any Idea What Would Happen. 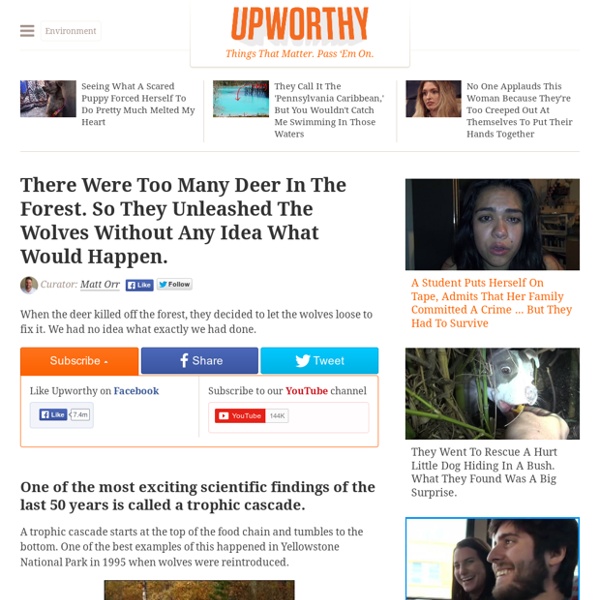 One of the most exciting scientific findings of the last 50 years is called a trophic cascade. A trophic cascade starts at the top of the food chain and tumbles to the bottom. One of the best examples of this happened in Yellowstone National Park in 1995 when wolves were reintroduced. Wolves are really good at eating deer. Basically, wolves see deer/elk like this: Humans killed all the wolves in Yellowstone National Park 70 years ago. Humans, being the controlling type in our relationship with Earth, tried to control the deer population. Deer started avoiding certain parts of the park — mostly the places where they could easily be trapped. And those areas started to regenerate! Barren parts of the land became lush forest filled with new animals. Beavers loved the new trees, so they started moving in too! The wolves started killing coyotes, and that allowed for mice and rabbits. Bald eagles and hawks decided they wanted in on the action too. Then grizzly bears moved back as well! Related:  C • Our Environment and its Degradation • Animals

About the Wideman Prize Competition | Wideman Education Foundation The Wideman Prize is an annual competition designed to help young people develop the leadership and organizational skills needed to succeed in the modern work place. Using projects as a vehicle for learning, the competition requires teams of students to select, initiate, plan and then execute a real life project as part of their studies. Teams are judged based on their ability to work as a team, organize and plan resources, achieve results and show their ability to present a persuasive case for their projects to a panel of project management judges. The competition is open to students who are enrolled in Wideman Education Foundation (WEF) approved training courses. To ensure that the projects that teams choose to undertake is of value to society as a whole, competing teams are encouraged to select a project that delivers value to their communities. Teams who demonstrate their capabilities are selected as finalists in the competition. 2010 – 2011 Competition Press Release

A 2,500 Square-Mile Methane Plume Is Silently Hovering over Western US A monstrous cloud of accumulated methane—a potent greenhouse gas—is now hovering over a large portion of the western United States according to satellite imagery analyzed by NASA and reported by the Washington Post. Created by years of intentionally released and errantly leaked natural gas during fossil fuel drilling operations, the cloud—invisible to the human eye but captured by advanced satellite imaging technology—is centered over northwest New Mexico and described by the Post as "a permanent, Delaware-sized methane cloud, so vast that scientists questioned their own data when they first studied it three years ago." So alarmed by the size of the plume were scientists, NASA researcher Christian Frankenberg told the Post, "We couldn’t be sure that the signal was real." Though there is considerably less of it put into the atmosphere each year, methane is twenty times more powerful as a greenhouse gas than carbon-dioxide or CO2. Using available data, this graphic was created the Post:

Man attempts to hug wild lion. What happened next stunned me Kevin Richardson is a South African zookeeper who’s renowned for being so up close and intimate with lions that he has been accepted into several prides. The poaching of lions is at critical levels, South Africa is supplying considerable volumes of lion bones to India and China. Lion bones are being used as substitutes for tiger bone potions, and bones from wild lions are considered more effective than those bred in captivity. It is actually legal to sell bones from a lion. and many are being harvested as a by-product from the ‘Canned Lion Hunting’ – that said, how do you differentiate between captive lions and wild lions. What is clear is that already there is a fair amount of lions being smuggled from the wild into captivity which is highly illegal. In China, lion bones are soaked in rice wine, whereas in India the bones are made into a “paste” with added ingredients like herbs (some reports say opium is also mixed in). Please visit: www.panthera.org

Dino Pet – BioPop The lifespan of the dinoflagellates will vary based on their exposure to sunshine, external temperature and how quickly they require new nutrients to be supplemented. Typically, a Dino Pet will live for approximately 1 month to 3 months on nothing but a little indirect sunlight. If you want to extend the life of your pet, simply add a little bit of BioPop Dino Food to the mix and you can extend their life, forever… Seriously, by regularly adding Dino Food, the dinos can potentially reproduce indefinitely. If you accidentally forget to feed them and they all expire, you can also purchase refills of the dinoflagellates for your Dino Pet from BioPop (now available with zero guilt trips!). BioPop guarantees that your Dino Pet will arrive alive and healthy. Okay Close

Underwater robot provides first detailed, high-resolution 3D maps of Antarctic sea ice Antarctic scientists have combined measurements provided by an underwater robot with existing satellite data to show that Antarctic sea ice may be thicker than previously thought. Their first-of-a-kind high-resolution 3D maps cover over 500,000 square meters (5.4 million sq ft) in the Weddell, Bellingshausen, and Wilkes Land sectors of Antarctica, and they reveal heavy deformation in all three near-coastal regions that produces mean sea-ice draft (thickness of the submerged part of the ice) far in excess of ice drilling and ship-based measurements. This is a big leap forward in our ability to understand why and how the ice is changing on both small and large scales. View all The 2-m (6 ft) long, 200 kg (440 lb) SeaBED autonomous underwater vehicle (AUV) swam 20-30 m (65-100 ft) below the ice to previously-inaccessible areas on two separate expeditions, first in 2010 and then again in 2012. The scientists will now do surveys on a larger scale. Share

15 Rare Wild Cat Species You Never Knew Existed (Photos) Subscribe Share on Facebook Share on Twitter Share Tweet Felidae is the scientific name of the biological family whose most familiar member is the domestic cat. Something else you may have not known is that while some felids are widely known (like lions, cougars, bobcats and even the elusive ocelot), there are actually 41 known cat species living today – and most of them are as beautiful as they are rare. 1. This species of wild cat native to the Andes mountains in South America is rarely ever seen, let alone photographed. 2. These little fur-balls are also about the size of a domestic cat but have a whole lot more fur. 3. Native to south and southeast Asia, the fishing cat prefers to live near the water. 4. The sand cat calls Africa, the Arabian Peninsula, and western Asia home. 5. The margay resembles the ocelot but is smaller. 6. These absolutely precious kitties are the smallest wild cat species in the world. 7. 8. 9. 10. 11. 12. 13. 14. 15. Like us for more!

"Lancelot Link: Secret Chimp" Reviews & Ratings 'Aquatic Osteoporosis' Jellifying Lakes A plague of “aquatic osteoporosis” is spreading throughout many North American soft-water lakes due to declining calcium levels in the water and hindering the survival of some organisms, says new research from Queen’s University. Researchers from Queen’s, working with colleagues from York University and the University of Cambridge, as well as other collaborators, have identified a biological shift in many temperate, soft-water lakes in response to declining calcium levels after prolonged periods of acid rain and timber harvesting. The reduced calcium availability is hindering the survival of aquatic organisms with high calcium requirements and promoting the growth of nutrient-poor, jelly-clad animals. In the study, researchers looked at the microscopic organisms (~1 mm) Daphnia and Holopedium — the latter whose size is greatly increased by its jelly capsule.

Related:
Related:  C   -  Our Environment and its Degradation   -  Animals