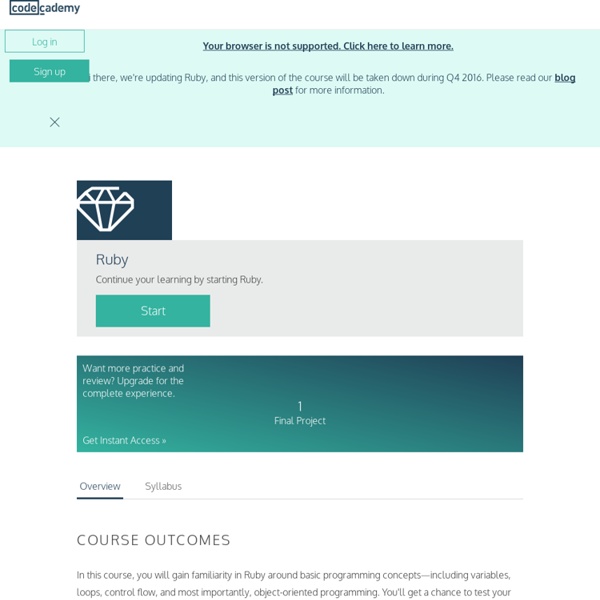 Getting Started with Rails 1 Guide Assumptions This guide is designed for beginners who want to get started with a Rails application from scratch. It does not assume that you have any prior experience with Rails. However, to get the most out of it, you need to have some prerequisites installed: The Ruby language version 2.2.2 or newer.Right version of Development Kit, if you are using Windows.The RubyGems packaging system, which is installed with Ruby by default. The Best Hacking Tutorial Sites - Learn Legal Hacking written by: Daniel Robson•edited by: Aaron R.•updated: 2/13/2011 Whether it's to understand potential attack vectors or simply for the fun of it, learning the basics of hacking is something that a lot of people aspire to. Here's our list of the top tutorial based hacking sites.

A Quick (and Hopefully Painless) Ride Through Ruby (with Cartoon Foxes) Yeah, these are the two. My asthma’s kickin’ in so I’ve got to go take a puff of medicated air just now. Be with you in a moment. I’m told that this chapter is best accompanied by a rag. 10 Python pitfalls (or however many I'll find ;-) These are not necessarily warts or flaws; rather, they are (side effects of) language features that often trip up newbies, and sometimes experienced programmers. Incomplete understanding of some core Python behavior may cause people to get bitten by these. This document is meant as some sort of guideline to those who are new to Python. It's better to learn about the pitfalls early, than to encounter them in production code shortly before a deadline. :-} It is *not* meant to criticize the language; as said, most of these pitfalls are not due to language flaws. 1.

When NoSQL Databases Are — Yes — Good For You And Your Company The proliferation of non-relational databases in the tech sector these days could lead you to think that these data management tools (also known as NoSQL databases) are eventually going to make traditional relational databases extinct. Not so. Each of these database types is best suited for very different types of workloads, and that's going to prevent either one from tromping the other into the dust. Cain & Abel Cain & Abel is a password recovery tool for Microsoft Operating Systems. It allows easy recovery of various kind of passwords by sniffing the network, cracking encrypted passwords using Dictionary, Brute-Force and Cryptanalysis attacks, recording VoIP conversations, decoding scrambled passwords, recovering wireless network keys, revealing password boxes, uncovering cached passwords and analyzing routing protocols. The program does not exploit any software vulnerabilities or bugs that could not be fixed with little effort. It covers some security aspects/weakness present in protocol's standards, authentication methods and caching mechanisms; its main purpose is the simplified recovery of passwords and credentials from various sources, however it also ships some "non standard" utilities for Microsoft Windows users. The latest version is faster and contains a lot of new features like APR (Arp Poison Routing) which enables sniffing on switched LANs and Man-in-the-Middle attacks.

Getting a Git Repository You can get a Git project using two main approaches. The first takes an existing project or directory and imports it into Git. The second clones an existing Git repository from another server. Initializing a Repository in an Existing Directory

Become a Programmer, Motherfucker If you don't know how to code, then you can learn even if you think you can't. Thousands of people have learned programming from these fine books: Learn Python The Hard Way Learn Ruby The Hard Way Learn Code The Hard Way Home Mongoid (pronounced mann-goyd) is an Object-Document-Mapper (ODM) for MongoDB written in Ruby. It was conceived in August, 2009 during a whiskey-induced evening at the infamous Oasis in Florida, USA by Durran Jordan. The philosophy of Mongoid is to provide a familiar API to Ruby developers who have been using Active Record or Data Mapper, while leveraging the power of MongoDB's schemaless and performant document-based design, dynamic queries, and atomic modifier operations. This is the site for Mongoid 3 documentation, along with Origin and Moped. If you want the Mongoid 2 docs, please go here. class Artist include Mongoid::Document field :name, type: String embeds_many :instrumentsend class Instrument include Mongoid::Document field :name, type: String embedded_in :artistend syd = Artist.where(name: "Syd Vicious").between(age: 18..25).first syd.instruments.create(name: "Bass") syd.with(database: "bands", session: "backup").save!