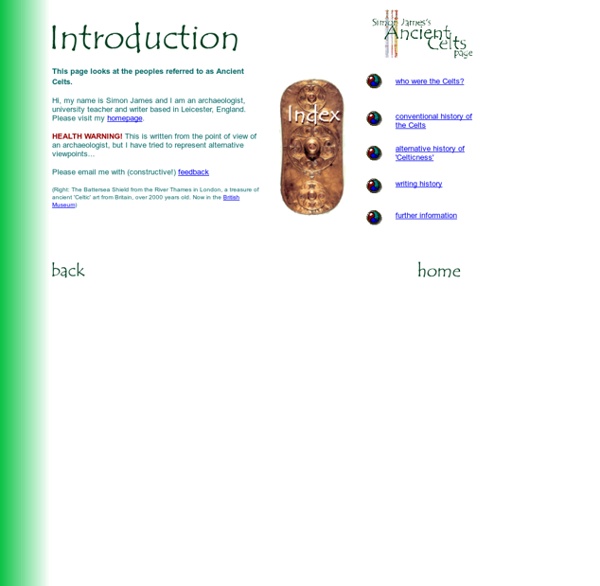 Celtic Interlace Designs The second view maintains that Celtic interlace originated in the Middle East as part of the artistic tradition of the Eastern Roman Empire in Byzantium (Constantinople, now Instanbul). Byzantine artists had already begun to use interlace in the development of their preferred form of two-dimensional art - the latter being fully exploited in the icons, mosaics, calligraphy and illuminations of the later Eastern Orthodox Church. The proponents of this view cite Christian Coptic (Egyptian) and Syrian illuminated texts, produced during the 5th and 6th centuries, as the true precursors of Western Gospel manuscripts like the Book of Durrow.

Ancient China - The Ancient Chinese Civilization Chinese Historical Accounts the Forbidden City, the home of the Chinese emperors until the last dynasty was overthrown in the 20th century Chinese history, until the twentieth century, was written mostly by members of the ruling scholar-official class and was meant to provide the ruler with precedents to guide or justify his policies. Celtic Art: History, Characteristics What Were the Main Characteristics of Hallstatt Arts and Crafts? Hallstatt art from Central Europe is noted for its high quality iron tools and weaponry, along with its bronze-based manufacture of decorative items and ornamentation. But relatively few silver or Gold objects have been found from this era. Hallstatt was influenced by the militaristic Mycenean art and culture c.1650-1200 BCE which the Celts absorbed as they passed through the Black Sea area. The type-site in Austria, fully excavated by archeologists in the 19th century, included more than 2,000 graves packed with an assortment of functional and ornamental items.

THE PHOENICIANS Mediterranean trade: from the 11th century BC The Phoenicians inhabit the region of modern Lebanon and Syria from about 3000 BC (see Palestine and Phoenicia). They become the greatest traders and the best sailors and navigators of the pre-classical world. Celtic Culture: Characteristics of Visual Art, Language, Religion Tribes of Continental Celts In Central Europe, the original European centre of Celt activity from at least 1000 BCE, Celtic tribes included the Boii, who ranged across the Czech Republic, Slovakia, Hungary, Germany and Austria; the Lugii in Poland; the Vindelici in Germany; the Cotini and Osiin Slovakia; the Eravisci in Hungary; and (from c.335 BCE onwards) the Scordisci, Latobici and Varciani in Slovenia and Croatia. By 500 BCE, Celts were established throughout the territory of "the Gauls", an area corresponding to modern day Belgium, France,and Switzerland, as well as parts of Northern Italy and Northern Spain.

In Search of Ancient Ireland . Technology by Carmel McCaffrey and Leo Eaton ometime in the fifth millennium B.C., new technology arrived in Ireland, carried by immigrants from Europe or native Irish who had learned new skills overseas. This marked the beginning of Irish agriculture, the ability to grow cereal crops and raise livestock. Grain and farm animals arrived by boat since neither was native to Ireland. Ancient Japan - The Ancient Japanese Empire The Geisha, the traditional Japanese ideal of beauty Where did the Japanese come from? Why did they settle the islands? What did life look like before history was written down? In order to get a handle on ancient Japanese history, it helps to consider that it is driven by outside influences. The first involved the settlement of Japan by a group of peoples from the Korean peninsula in the third century BC.