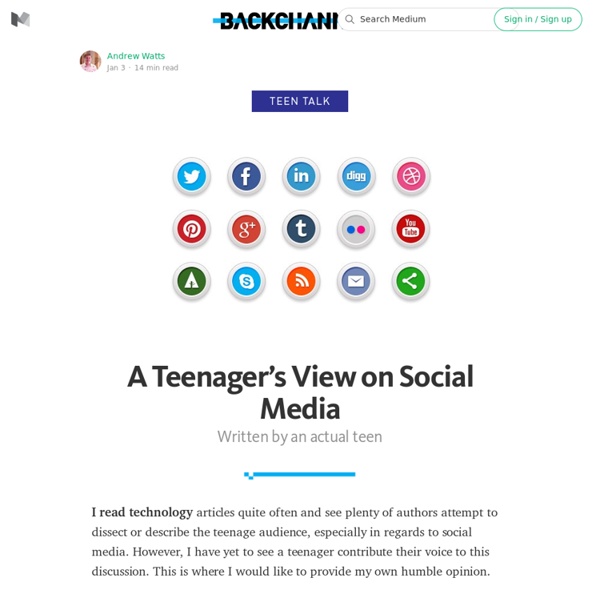 Written by an actual teen I read technology articles quite often and see plenty of authors attempt to dissect or describe the teenage audience, especially in regards to social media. However, I have yet to see a teenager contribute their voice to this discussion. This is where I would like to provide my own humble opinion. For transparency, I am a 19-year-old male attending The University of Texas at Austin. I am extremely interested in social media’s role in our society as well as how it is currently evolving. This article will not use any studies, data, sources, etc. I think the best way to approach this would be to break it down by social media network and the observations/viewpoints I've gathered over the years. Facebook In short, many have nailed this on the head. Facebook is often used by us mainly for its group functionality. Facebook is often the jumping-off point for many people to try to find you online, simply because everyone around us has it. Instagram Twitter Snapchat Tumblr

21st-Century Learning Using Social Media: Advice from Finland Petri Ahokas works with students in Finland Many teachers believe social media doesn’t have a place in the 21st-century learning environment; it is simply a tool for people to keep their friends up to date with their lives, right? Or is it? Teacher Petri Ahokas, from Turun Normaalikoulu school, Norssi in Finland, explains how he uses social media ethically and legally to engage his eight and nine year old students in learning. By Petri Ahokas When I look at the process of social media it is easy to consider its place in the learning environment. I read messages from other friends and if their communication is worthy I choose to become a ‘fan’. Safe Social Media for Global Learning I have a class of multicultural students, who speak seven different languages between them. As a teacher, I believe that teaching children to understand how to behave appropriately when they are using the internet is an important part of 21st century learning. Keeping safety in mind About The Author markbarnes19

Your Digital Strategy Shouldn’t Be About Attention Are they talking about your brand? Around the clock? From Facefriend to Tweeter to Instapal? Pssst. That’s probably not the right question. Today, too many strategists believe that a clever plan to win the internet’s attention is a good digital strategy. It’s not. Institutions and leaders, obedient students of modern marketing, obsessively ask, “How do we get people to be loyal to us?” The real question — the one that counts for leaders and institutions today — isn’t “How loyal can we compel, seduce, or trick our customers into being?” So here are my top four mistakes of digital strategy — and how not to make them. Titillating, not educating. Making zombies, not superheroes. When a company asks “how loyal can we be to our customers?” Infecting, not connecting. Consider Mr Porter, the man-cousin of Net-a-Porter. Communicating, not elevating. Instead, focus on giving people what matters most to them — but what they feel cheated of, stymied from, and suffocated by at every turn.

is the internet the new street? Today we're more distracted than ever. On our phones all the time, swept away in the infinite streams of Facebook, Instagram, Snapchat, Tumblr, Twitter and everything else. Fashion shows feel as much about snapping the models of the moment, and filming the finales, as looking at the clothes. If you're lucky enough to sit front row at the British Fashion Council's big tent, you'll have a brightly coloured bottle of Vitamin Water and a cluster of phone chargers sprouting under your seat; that's all you really need. This is about so much more than fashion week though, it's about the way we experience the world. i-D started out as a street style fanzine documenting trends as they happened in our cities. Punk was supposed to change the world, now it's a theme for the Met Ball; an excuse for Miley Cyrus to spike her hair and Kim Kardashian to dress up as a settee. Now it seems like the streets have lost their edge. There's a real crossing swords of cultures on the internet. That's not all.

The Complete Parent's Guide to Instagram Sometimes I take my knowledge of social media for granted. Because the truth is that while everyone under the age of 18 has never known a world without internet or cell phones, most parents have a hard time keeping up. My work requires me to use and be heavily involved with social media, and even I’m still not sure what the true purpose of Snapchat is. Yesterday afternoon a friend of mine posted something on Facebook that I found disturbing as a parent. The photo below (posted with permission) is a screen shot of a photo that her daughter had posted on Instagram. This isn’t some image I grabbed online or from a friend of a friend. The vile comment posted on her picture was posted from an anonymous account with the name “[juniorhighname]hatepage”. And this isn’t an isolated incident. A few months ago, I saw many of my hometown friends sharing an article about my old high school. We’re ingrained with the desire to protect our children from strangers. Take responsibility.

Using Twitter and Pinterest analytics to build engaging content strategies The news this week that Twitter has opened up its analytics platform to all is a welcome one for all marketers that value data validation within their decision making process. The announcement comes hot on the heels of the news from Pinterest that it has, for the first time, also opened up its vast treasure trove of data to businesses via its new interface. Data-driven content strategy is something I have spent the past 15 years pursuing and so the addition of such insight moves that process on further than ever and today I want to look at actionable ways in which these new platforms can be used. Social sharing The amount your content is interacted with when shared across social is the best validation of its quality, or resonance with your chosen audience. Until relatively recently though, the process of obtaining solid data on that had been convoluted at best and at worst expensive. Twitter Analytics Tweets To do that you’ll need to separate the data in the ‘time’ column you can see below:

The Beginner’s Guide to Snapchat Snapchat, one of the hottest mobile messaging apps, has become a convenient and fun way to send photos and videos to friends and family without eating up your phone's memory. Launched in 2011, Snapchat allows users to add captions, drawings and filters to their photos and videos (also known as "snaps"). Unlike other messaging apps, you can view snaps for a maximum of 10 seconds, and then it's gone for good. Anything shared through the service self-destructs, leaving no evidence that it existed. (However, just like everything else online, privacy isn't guaranteed.) If you want to join the Snapchat craze and learn the basics, check out this step-by-step guide. 1. Snapchat can be downloaded for free on Android and iOS devices. To create a free account, tap "Sign Up." Image: Screenshot Snapchat You need to be at least 13 years old to use Snapchat. As part of the verification process, you may be asked a question like the one below. 2. Next, you'll see the "Find Friends" screen. 3. 4. Use camera