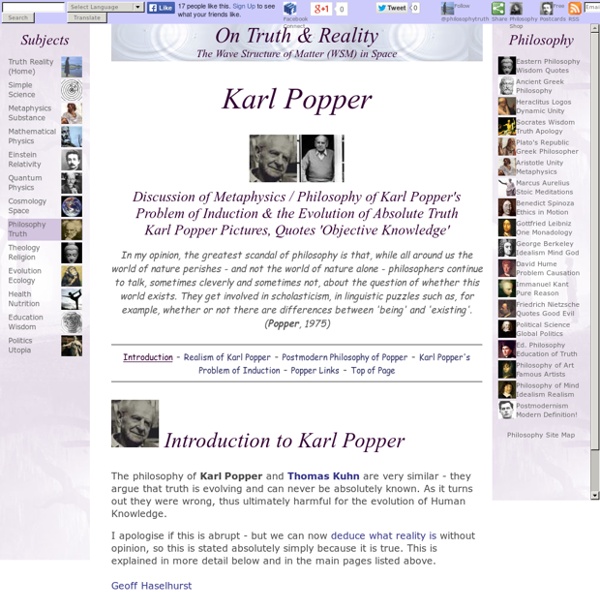 Discussion of Metaphysics / Philosophy of Karl Popper's Problem of Induction & the Evolution of Absolute Truth Karl Popper Pictures, Quotes 'Objective Knowledge' In my opinion, the greatest scandal of philosophy is that, while all around us the world of nature perishes - and not the world of nature alone - philosophers continue to talk, sometimes cleverly and sometimes not, about the question of whether this world exists. They get involved in scholasticism, in linguistic puzzles such as, for example, whether or not there are differences between 'being' and 'existing'. (Popper, 1975) Introduction to Karl Popper The philosophy of Karl Popper and Thomas Kuhn are very similar - they argue that truth is evolving and can never be absolutely known. I apologise if this is abrupt - but we can now deduce what reality is without opinion, so this is stated absolutely simply because it is true. Geoff Haselhurst Realism of Karl Popper My thesis is that realism is neither demonstrable nor refutable.

Banksy’s New Apocalyptic Theme Park Is Designed to Disappoint A glitchy Ariel is one of the Banksy works that will greet crowds to Dismaland. (all images courtesy Christopher Jobson of Colossal) Today, it was officially announced that British artist Banksy has constructed a dystopian riff on Disneyland in a derelict seaside resort in Weston-super-Mare, England. Called Dismaland, the ambitious five-week project is sure to attract visitors eager for the artist’s brand of viral culture jamming and populist humor, but there’s a twist.

Alain Badiou: The Event Badiou's theory of the Event is the lynchpin of his influential, but controversial, theory of revolutionary politics. In the fifth instalment of his series, Andrew Robinson traces the contours of the Event, and its fundamental attributes, such as undecidability, ontological disruption, and unfoundedness. He also examines which historical revolts are viewed by Badiou as authentic Events – and why some historical revolts fall short. By Andrew Robinson The Event The Event is Badiou’s best-known concept and represents, in essence, his conception of revolution and social change, whether in politics or other domains.

Learn to Fight Capitalism at the School of Disobedience Jani Leinonen, “School of Disobedience” (2015) (courtesy the artist) A forthcoming exhibition in Helsinki will offer visitors an education grounded in disobedience and protest, equipping them with tools and ideas to challenge society’s injustices and fight for change. The School of Disobedience, which opens on September 4 at Finland’s contemporary art museum, Kiasma, is part art show, part educational institution: visitors to the museum are treated as students, receiving lessons from the more than 100 works on view or through a series of workshops with curricula that encourage civil disobedience through different media.

Sex magic Paschal Beverly Randolph[edit] The earliest known practical teachings of sex magic in the Western world come from 19th-century American occultist Paschal Beverly Randolph, under the heading of The Mysteries of Eulis: If a man has an intelligent and loving wife, with whom he is in complete accord, he can work out the problems [of how to achieve magical results] by her aid.

Heidegger: Thinking the Unthinkable German philosopher Martin Heidegger addressed the central question of human existence full on, by examining how human self-awareness depends on concepts of time and death. His preoccupation with ontology - the form of metaphysical inquiry concerned with the study of existence itself - dominated his work. The central idea of his complex Sein und Zeit (Being and Time) (1927) could be summed up in the phrase 'being is'. Man had to ask himself 'what is it to be?' History of Philosophy The safest general characterization of the European philosophical tradition is that it consists of a series of footnotes to Plato. Alfred North Whitehead, Process and Reality, p. 53 [Free Press, 1969]; the painting is the School of Athens (Scuola di Atene) by Raphael, with Plato, pointing up, and Aristotle, gesturing down, in the middle [note]. BILL MURRAY: "What did you study?" SCARLETT JOHANSSON: "Philosophy." BILL MURRAY: "Yeah, there's a good buck in that racket."