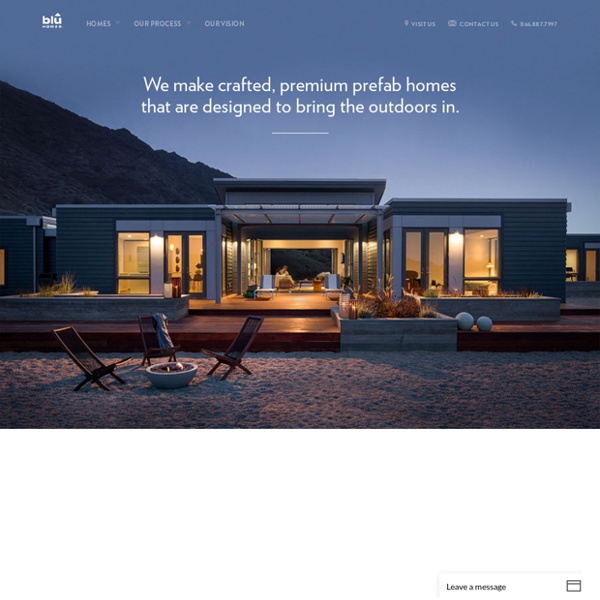 Scrapbook Note, links open in new window. Glidehouse Glidehouse is one of the forerunners in contemporary, sleek modular housing. Their Clean Living, Green Living website shows you many examples and plans of what they offer. Digital Marketing Agency All Natural: A house exemplifies passive strategies and embraces non-toxic materials. - Best Green Houses When Passive House Institute U.S. launched its first training program in 2008, the Eugene, Oregon–based architect Jan Fillinger proved a natural sign-up. The Swiss-born founder of STUDIO-E Architecture kept Ed Mazria’s The Passive Solar Energy Book as a desktop bible during his student years at the University of California at Berkeley, and he has pursued sustainability in general since his first day of practice. “I fell in love with the Passive House approach the moment I learned about it, because it is the most effective way I have ever encountered to achieve the highest level of energy efficiency,” Fillinger says. “[Passive House Institute U.S.] also has a modeling system that allows you to fine-tune systems and assemblies to that sweet spot where you get the most bang for the dollar spent.”

Tiny House Eco Village for the Homeless Architect Arthur Dyson is working with construction management students at Fresno State to create an unprecedented “Eco-Village” of tiny homes for homeless folks. The homes will be made of recycled materials – pallet flooring and framing, waterproofed cardboard walls, aluminum can roofing – and some donated materials from Lowe’s, according to The Fresno Bee . The green community would have several tiny homes amidst fruit trees and landscaping, while a main building would house kitchen and bathroom facilities, as well as shops for residents to sell things they’ve made or grown. The first homes are under construction, as pictured, and will be as small as 80 square feet. DogTrot Mod The Dogtrot Mod: Celebrating Modern Dogtrot Style, In Modern Prefab Cabin Form. This sleek expandable prefab cabin house kit intertwines passive solar sophistication with a natural setting... Bringin' cabin outdoors-in philosophy to a smart growth urban corner lot or preserved open space near you.

Home Minnesota man building a 3D printer to construct houses It's the dream of many to build their own home, but financial, temporal and technical limitations mean that few of us ever do. At least, that's the situation right now. An inventor from Minnesota is currently trying to build an enormous 3D printer that'd do for housebuilding what the technology has already done for small colored plastic widgets. Andrey Rudenko is currently working on hardware that'll help him build his next home, but that could also be sold to contractors for "the cost of a car." The (Green) Tiny House Movement The tiny house movement experienced a surge of sorts when a recent video hit front page Yahoo! But the movement has been growing in popularity over time, especially during the rough and tumble of the last few years. Tiny houses often include green elements or can be seen as inherently green because they’re small and require tiny amounts of water and energy.

Passive Houses the Secrets “Too cheap to meter” You remember that promise fr om the nuclear industry? Electricity will drop in costss far, that it will not be wise to even measure the consumption you have – thisin and again, last time, in connection with the liberation ofmany is some 250 € (per year!). That’s what others normallyy efficiency”-path is much more economi-sive for the consumers. akind of promise came agathe market for electricity.