Philosopher Martha Nussbaum on How to Live with Our Human Fragility 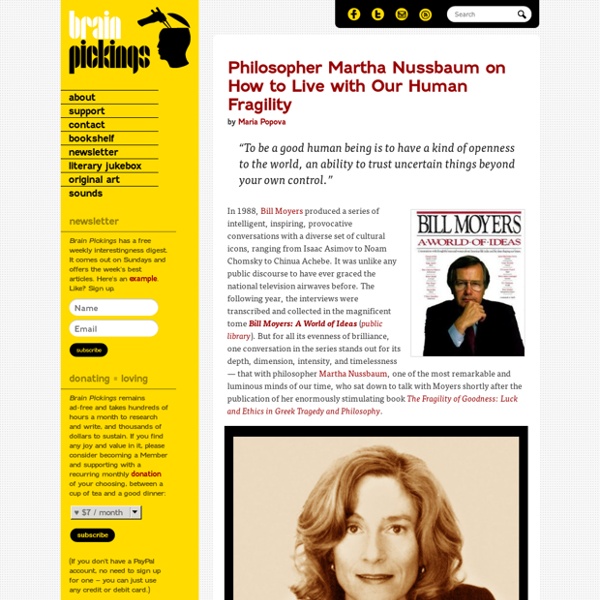 by Maria Popova “To be a good human being is to have a kind of openness to the world, an ability to trust uncertain things beyond your own control.” In 1988, Bill Moyers produced a series of intelligent, inspiring, provocative conversations with a diverse set of cultural icons, ranging from Isaac Asimov to Noam Chomsky to Chinua Achebe. It was unlike any public discourse to have ever graced the national television airwaves before. The following year, the interviews were transcribed and collected in the magnificent tome Bill Moyers: A World of Ideas (public library). Martha Nussbaum Moyers begins by framing Nussbaum’s singular approach to philosophy and, by extension, to the art of living: MOYERS: The common perception of a philosopher is of a thinker of abstract thoughts. Being a human means accepting promises from other people and trusting that other people will be good to you. Illustration by Alice and Martin Provensen from 'The Iliad and the Odyssey: A Giant Golden Book.'

Happy Birthday, Milton Glaser: The Iconic Designer on Art, Money, Education, and the Kindness of the Universe by Maria Popova “If you perceive the universe as being a universe of abundance, then it will be. If you think of the universe as one of scarcity, then it will be.” Milton Glaser — legendary mastermind of the famous I♥NY logo, author of delightful and little-known vintage children’s books, notorious notebook-doodler, modern-day sage of art and purpose — is celebrated by many as the greatest graphic designer alive. From How to Think Like a Great Graphic Designer (public library) — the same fantastic anthology of conversations with creative icons that gave us Paula Scher’s slot machine metaphor for creativity and Massimo Vignelli on intellectual elegance, education, and love — comes a fascinating and remarkably heartening conversation that reveals the inner workings of this beautiful mind and beautiful spirit. What E. While other great designers have created cool posters, beautiful book covers, and powerful logos, Milton Glaser has actually lifted this age he inhabits. Donating = Loving

Anaïs Nin on Embracing the Unfamiliar by Maria Popova “It is a sign of great inner insecurity to be hostile to the unfamiliar.” We’ve already seen that life is about living the questions, that the unknown is what drives science, and that the most beautiful experience we can have is the mysterious. John Keats wrote of this art of remaining in doubt “without any irritable reaching after fact & reason” and famously termed it “negative capability.” But count on Anaïs Nin to articulate familiar truths in the most exquisitely poetic way possible, peeling away at the most profound and aspirational aspects of what it means to be human. In a diary entry from the winter of 1949-1950, found in The Diary of Anaïs Nin, Vol. 5: 1947-1955 (public library), which gave us Nin’s whimsical antidote to city life and her poignant meditation on character, parenting, and personal responsibility, she observes: Educators do all in their power to prepare you to enjoy reading after college. Donating = Loving Brain Pickings has a free weekly newsletter.

Situations Matter: How Context Shapes Our Lives by Maria Popova Debunking the myth of character, or what sitcoms have to do with the mysteries of personality. “What matters most is how well you walk through the fire,” Charles Bukowski famously wrote. We’re easily seduced by the notion of stable character. For the ultimate cherry on top, especially for fellow lovers of book trailers, here is a wonderful pictogram- and typography-driven motion graphics teaser for the book: From why “personality” is a myth (cue in Julian Baggini’s The Ego Trick) to how “character” fluctuates (cue in David DeSteno and Piercarlo Valdesolo’s Out of Character) to a multitude of other psychological biases and misconceptions that cloud our interpretation of reality (cue in David McRaney’s You Are Not So Smart), Sommers fuses cognitive science with sociology and witty observation to pull into question what personhood means (cue in Christian Smith’s What Is a Person?) Donating = Loving Bringing you (ad-free) Brain Pickings takes hundreds of hours each month.

How to Cope with Uncomfortable Uncertainty Joy is not the only experience that people try to avoid, to their detriment. Many people cannot tolerate the feeling of uncertainty, and according to mounting evidence, this fear affects mood and health. Intolerance of uncertainty is linked with mental disorders such as anxiety and depression, researchers confirmed in a paper in the June 2013 issue of the Journal of Clinical Psychology; their results also revealed a strong link to panic disorder. People with this fear try to feel more certain with strategies such as excessive checking, planning and reassurance seeking, worry and rumination, and avoidance of unfamiliar situations. Perhaps unsurprisingly, intolerance of uncertainty has been found to be related to obsessive-compulsive disorder and hoarding—although many more people experience subtle symptoms that disrupt quality of life without meeting the diagnostic criteria for a mental disorder.

Happy Birthday, Donald Barthelme: The Beloved Writer on the Art of Not-Knowing and the Not-Knowing of Art by Maria Popova “Our devouring commercial culture… results in a double impoverishment: theft of complexity from the reader, theft of the reader from the writer.” “We try to see in the dark,” Annie Dillard offered in her superb meditation on writing, “we toss up our questions and they catch in the trees.” Postmodernist icon Donald Barthelme (April 7, 1931–July 23, 1989) was not only one of the most innovative and memorable voices in twentieth-century fiction, known for his seemingly plotless verbal-collage narratives, but also a writer with a special sensitivity to language and an exceptional ability to articulate its magic. Barthelme begins with a definition of a writer as a professional not-knower: The writer is one who, embarking upon a task, does not know what to do. . . .Writing is a process of dealing with not-knowing, a forcing of what and how. He then considers the essential problems of the serious writer: Problems are a comfort. Considering these “thorny” problems, Barthelme adds:

Stop Making Plans: How Goal-Setting Limits Rather Than Begets Our Happiness and Success by Maria Popova “Uncertainty is where things happen. It is where the opportunities — for success, for happiness, for really living — are waiting.” “The job — as well as the plight, and the unexpected joy — of the artist is to embrace uncertainty, to be sharpened and honed by it,” Dani Shapiro wrote in her beautiful meditation on the perils of plans. But while embracing uncertainty may be the cure for our epidemic of anxiety and the root of the creative spirit, it remains an art enormously challenging and uneasy-making for the human psyche. There is hardly a better time than a month into a new year to behold the disconnect between our plans and our reality as even our most vigorously intended New Year’s resolutions crumble, despite all that we know about the psychology of self-control and the science of forming new habits. The solution, however, might not be to further tighten the grip with which we cling to our plans — rather, it’s to let go of plans altogether. Donating = Loving

Legendary Harvard Psychologist Jerome Bruner on the Art of “Effective Surprise” and the 6 Essential Conditions of Creativity by Maria Popova “Passion, like discriminating taste, grows on its use. You more likely act yourself into feeling than feel yourself into action.” One of the greatest preoccupations not only of our culture but of our civilization is the question of what creativity is, dating back to the dawn of recorded thought. But it wasn’t until the advent of modern psychology in the early twentieth century that our answers to the question began to take the shape of something more structured and systematic than metaphysical hunches — there’s Graham Wallace’s model of the four stages of the creative process from 1926, a five-step “technique for producing ideas” from 1939, Arthur Koestler’s famous “bisociation” theory of how creativity works from 1964, and a number of derivative modern ideas. But one of the most compelling in the past century comes from the influential Harvard psychologist Jerome Bruner (b. Jerome Bruner There is something antic about creating, although the enterprise be serious.

The Magic and Logic of Color: How Josef Albers Revolutionized Visual Culture and the Art of Seeing by Maria Popova “A thing is never seen as it really is.” “Hundreds of people can talk, for one who can think,” John Ruskin wrote, “but thousands of people can think, for one who can see.” “We see, but we do not see: we use our eyes, but our gaze is glancing, frivolously considering its object,” Alexandra Horowitz lamented in her sublime meditation on looking. Albers, who headed the legendary Black Mountain College that shaped such luminaries as Zen composer John Cage and reconstructionist Ruth Asawa, lays out the book’s beautifully fulfilled and timeless promise in the original introduction: In visual perception a color is almost never seen as it really is — as it physically is. A color has many faces, and one color can be made to appear as two different colors. The 'afterimage effect' demonstrates the interaction of color caused by interdependence of color: On the left are yellow circles of equal diameter which touch each other and fill out a white square. Donating = Loving

8 tips to make your life more surprising — from a “Surprisologist” A closeup of Tania Luna, with glow stick. Photo: James Duncan Davidson In today’s talk, Tania Luna shares her experience of immigrating to the United States from Ukraine as a little girl. Perfectly happy with her family’s outhouse and with chewing a single piece of Bazooka gum for a week, Luna found herself blown away by the wonders of her new country. Commit to the mindset and process of surprise. Luna believes we can all be surprisologists. Tania Luna leads a TED audience in a glowstick dance, during a talk given a year prior to the one posted today.