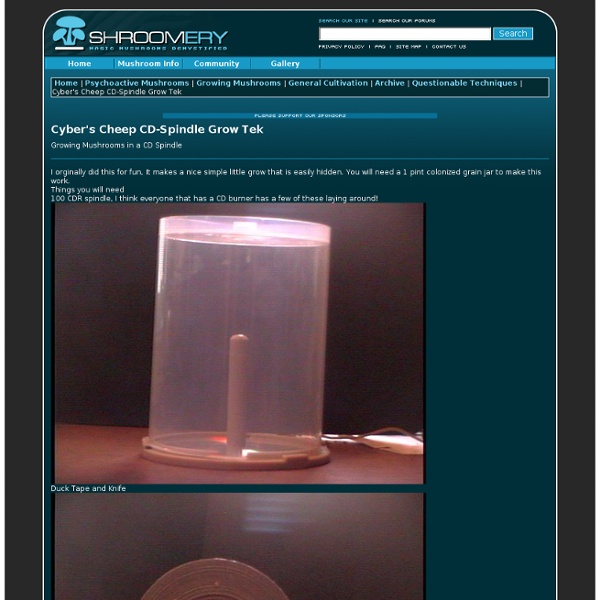 I orginally did this for fun, It makes a nice simple little grow that is easily hidden. You will need a 1 pint colonized grain jar to make this work. Things you will need 100 CDR spindle, I think everyone that has a CD burner has a few of these laying around! Duck Tape and Knife Spray bottle of distilled water Spray bottle of alcohol Sterile spoon plastic wrap Vermiculite 1/4 cup measuring cup a bowl and a colonized pint of WBS OK Lets start. Next you want to use the ducktape and cover 3" of the bottom of the spindle This works out to be a layer starting at the bottom with a second layer 1/2 over the first. (2" wide ducktape) Don't forget to cover the bottom of the spindle we do not want any light getting in! Take the bottle of alcohol and spray and clean the inside of the spindle. I am using a dental spoon which has been sterilized on an autoclave bag. Mix them in a bowl. Some people will microwave or pasteurize the vermiculite. Now add your vermiculite to bring it up to the tape line.

Rainy season brings glow-in-the-dark mushrooms 24 May 2006 With the arrival of Japan's rainy season, a mysterious type of green, glow-in-the-dark mushroom begins to sprout in Wakayama prefecture. The Mycena lux-coeli mushrooms, known locally as shii no tomobishi-dake (literally, "chinquapin glow mushrooms"), sprout from fallen chinquapin trees. As they grow, a chemical reaction involving luciferin (a light-emitting pigment contained within the mushrooms) occurs, causing them to glow a ghostly green. The luminescent mushrooms were long believed to be indigenous solely to Tokyo's Hachijojima Island after they were discovered there in the early 1950s. The mushrooms thrive in humid environments, popping up during Japan's rainy season, which typically lasts from the end of May to July. [Source: Mainichi Shimbun]

Terrarium Tek - Let's Grow Mushrooms Oyster Mushrooms Fruiting in Shotgun Terrarium P cubensis fruiting in terrarium - Photo credit: Fahtster Preparing to rinse Perlite Click thumbnails to enlarge Note: Do NOT waste your money on a digital hygrometer for your terrarium or mushroom growing house. This page explains the construction of a simple terrarium, also known as a fruiting chamber, for growing mushrooms. Over the years, I've seen many mushroom fruiting chamber designs come and go. Select Full Screen Mode from the 'Options' menu Download Full Release-Let's Grow Mushrooms in High Resolution for only $8.99! The download version of Let's Grow Mushrooms is available in two popular formats. Purchase the DVD Release of "Let's Grow Mushrooms" Four hours of hands-on video instruction in the art of mushroom cultivation, shown at full screen broadcast TV resolution. The terrarium system that I designed and demonstrate here is what I consider to be the best combination of easy construction, excellent function, and low maintenance.

Interactive 3D model of Solar System Planets and Night Sky Is the Universe a Holographic Reality? The Universe as a Hologram by Michael Talbot Does Objective Reality Exist, or is the Universe a Phantasm? In 1982 a remarkable event took place. Aspect and his team discovered that under certain circumstances subatomic particles such as electrons are able to instantaneously communicate with each other regardless of the distance separating them. University of London physicist David Bohm, for example, believes Aspect's findings imply that objective reality does not exist, that despite its apparent solidity the universe is at heart a phantasm, a gigantic and splendidly detailed hologram. To understand why Bohm makes this startling assertion, one must first understand a little about holograms. The three-dimensionality of such images is not the only remarkable characteristic of holograms. The "whole in every part" nature of a hologram provides us with an entirely new way of understanding organization and order. This insight suggested to Bohm another way of understanding Aspect's discovery.

Rare ‘Devil’s Cigar’ fungus discovered in Nara One of the world's rarest fungi, an exotic star-shaped mushroom known to exist at only three locations on Earth, has been discovered in the mountains of Nara prefecture. The Devil's Cigar (a.k.a. "Texas Star") -- known to botanists as Chorioactis geaster -- had been observed only in central Texas and at two remote locations in Japan prior to the recent discovery in Nara. The peculiar fungus is described as a dark brown cigar-shaped capsule that transforms into a tan-colored star when it splits open to release its spores. It is also one of only a few known fungi that produce an audible hiss when releasing spores. First reported in 1893 in Austin, Texas, the curious mushroom appears in a limited area of central Texas each year, and until now, the rare sightings in Japan have occurred in forests in Miyazaki and Kochi prefectures. The recent Nara discovery was made by Masakuni Kimura, curator of a natural history museum in the town of Kawakami (Nara prefecture).

Pf tek done right TEK - Mushroom Cultivation PF tekThings needed 1/2 pint wide mouth canning jarsPot/Pressure cookerVermiculitePerliteBrown rice/Brow Rice FlourTin foil70% Iso alcoholPlastic Tote6500K florescent bulb1/4 inch drill bit/DrillHammer/NailMixing bowl and spoonGypsumSpore syringeLatex glovesDust maskLighter Preparing the jar Take the lids and using a nail and hammer or a 1/8 drill bit, drill 4 holes near the rim of the lids nicely spaced out. Depending what way you use you lids i use mine rubber side down just punch the holes so they don’t leave burrs pointing towards you. The basic recipe for 5 PF jars is this 2 parts vermiculite 1 part water and 1 part BRF (additionally you can add 1 tablespoon of gypsum for 5 jars) In a bowl add the 2 cups of vermiculite (and gypsum if you use it) now add the 1 cup of water, mix really well. Take a paper towel and wipe the 1/2inch space you left at the tops of the jars making sure to wipe away any BRF mixture or moisture away. Sterilizing Inoculation Incubation Birthing and dunk Fruiting Tips

Robert Anton Wilson There are periods of history when the visions of madmen and dope fiends are a better guide to reality than the common-sense interpretation of data available to the so-called normal mind. This is one such period, if you haven't noticed already. Robert Anton Wilson (January 18, 1932 – January 11, 2007) was an American novelist, essayist, Absurdist philosopher, futurist, and guerilla ontologist, most famous for his satirical work (with Robert Shea), The Illuminatus! Trilogy. Quotes[edit] There is no restraint that cannot be escaped. I'm a libertarian because I don't trust the people as much as anarchists do. Every war results from the struggle for markets and spheres of influence, and every war is sold to the public by professional liars and totally sincere religious maniacs, as a Holy Crusade to save God and Goodness from Satan and Evil. I sometimes call myself a libertarian but that's only because most people don't know what anarchist means.