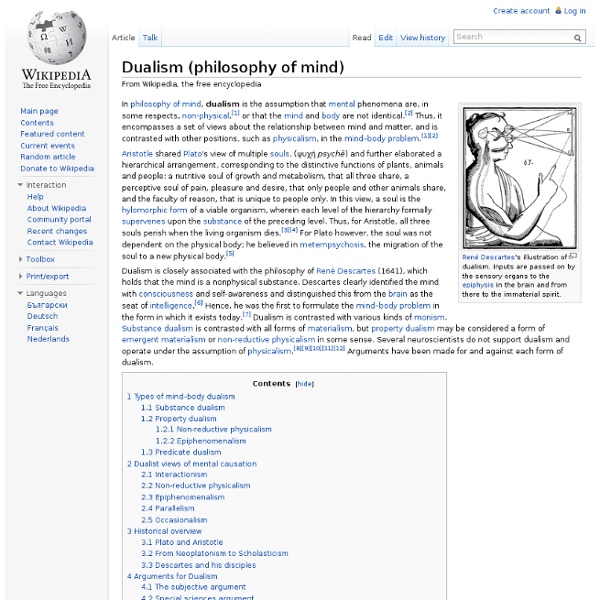 René Descartes's illustration of dualism. Inputs are passed on by the sensory organs to the epiphysis in the brain and from there to the immaterial spirit. In philosophy of mind, dualism is the position that mental phenomena are, in some respects, non-physical,[1] or that the mind and body are not identical.[2] Thus, it encompasses a set of views about the relationship between mind and matter, and is contrasted with other positions, such as physicalism, in the mind–body problem.[1][2] Ontological dualism makes dual commitments about the nature of existence as it relates to mind and matter, and can be divided into three different types: Substance dualism asserts that mind and matter are fundamentally distinct kinds of substances.[1]Property dualism suggests that the ontological distinction lies in the differences between properties of mind and matter (as in emergentism).[1]Predicate dualism claims the irreducibility of mental predicates to physical predicates.[1]

Plato Plato (/ˈpleɪtoʊ/; Greek: Πλάτων Plátōn "broad"pronounced [plá.tɔːn] in Classical Attic; 428/427 or 424/423 – 348/347 BCE) was a philosopher, as well as mathematician, in Classical Greece. He is considered an essential figure in the development of philosophy, especially the Western tradition, and he founded the Academy in Athens, the first institution of higher learning in the Western world. Along with his teacher Socrates and his most famous student, Aristotle, Plato laid the foundations of Western philosophy and science.[2] Alfred North Whitehead once noted: "the safest general characterization of the European philosophical tradition is that it consists of a series of footnotes to Plato." Plato's dialogues have been used to teach a range of subjects, including philosophy, logic, ethics, rhetoric, religion and mathematics.

Philosophy of Mind: An Overview Brains & Minds Laura Weed takes us on a tour of the mind/brain controversy. In the twentieth century philosophy of mind became one of the central areas of philosophy in the English-speaking world, and so it remains. Notes for Cyborg Manifesto Theresa M. Senft's reading notes for Donna Haraway's "A Cyborg Manifesto" Below, I attempt to articulate the major ideas of Donna Haraway's "Cyborg Manifesto" for my own pedagogical purposes. While you read, please keep in mind that this is my interpretation of Haraway's text, and that I often re-arrange the order of her examples in my re-presentation of her words. René Descartes Descartes laid the foundation for 17th-century continental rationalism, later advocated by Baruch Spinoza and Gottfried Leibniz, and opposed by the empiricist school of thought consisting of Hobbes, Locke, Berkeley, and Hume. Leibniz, Spinoza and Descartes were all well versed in mathematics as well as philosophy, and Descartes and Leibniz contributed greatly to science as well. His best known philosophical statement is "Cogito ergo sum" (French: Je pense, donc je suis; I think, therefore I am), found in part IV of Discourse on the Method (1637 – written in French but with inclusion of "Cogito ergo sum") and §7 of part I of Principles of Philosophy (1644 – written in Latin). Early life[edit] Descartes was born in La Haye en Touraine (now Descartes), Indre-et-Loire, France. When he was one year old, his mother Jeanne Brochard died.

Mindfulness Mindfulness (Pali: sati,[1] Sanskrit: smṛti; also translated as awareness) is a spiritual or psychological faculty (indriya) that, according to the teaching of the Buddha, is of great importance in the path of enlightenment. It is one of the seven factors of enlightenment. "Correct" or "right" mindfulness (Pali: sammā-sati, Sanskrit samyak-smṛti) is the seventh element of the noble eightfold path. The Buddha advocated that one should establish mindfulness (satipaṭṭhāna) in one's day-to-day life, maintaining as much as possible a calm awareness of one's body, feelings, mind, and dharmas. The practice of mindfulness supports analysis resulting in the arising of wisdom (Pali: paññā, Sanskrit: prajñā).[2] A key innovative teaching of the Buddha was that meditative stabilisation must be combined with liberating discernment.[3] The Satipaṭṭhāna Sutta (Sanskrit: Smṛtyupasthāna Sūtra) is an early text dealing with mindfulness.

Empiricism John Locke, a leading philosopher of British empiricism Empiricism is a theory which states that knowledge comes only or primarily from sensory experience.[1] One of several views of epistemology, the study of human knowledge, along with rationalism and skepticism, empiricism emphasizes the role of experience and evidence, especially sensory experience, in the formation of ideas, over the notion of innate ideas or traditions;[2] empiricists may argue however that traditions (or customs) arise due to relations of previous sense experiences.[3] Empiricism, often used by natural scientists, says that "knowledge is based on experience" and that "knowledge is tentative and probabilistic, subject to continued revision and falsification."[4] One of the epistemological tenets is that sensory experience creates knowledge.

Reductionism Descartes held that non-human animals could be reductively explained as automata — De homine, 1662. Reductionism strongly reflects a certain perspective on causality. In a reductionist framework, the phenomena that can be explained completely in terms of relations between other more fundamental phenomena, are called epiphenomena. Often there is an implication that the epiphenomenon exerts no causal agency on the fundamental phenomena that explain it. Reductionism does not preclude the existence of what might be called emergent phenomena, but it does imply the ability to understand those phenomena completely in terms of the processes from which they are composed. This reductionist understanding is very different from that usually implied by the term 'emergence', which typically intends that what emerges is more than the sum of the processes from which it emerges.

Women’s History in the Digital World 2015 It seems unbelievable to me that just two weeks ago, many of us were sitting together in Bryn Mawr’s Thomas Library for the second Women’s History in the Digital World conference. As the conference organizer, I watched May 21 and 22 rush by in a blur of nametags, registration lists, sign-making (did anyone not get lost in Thomas?), and friends and colleagues, old and new. With close to 4,000 #WHDigWrld15 tweets to look back on — we’re a prolific bunch, we women’s historians — I’ve since been able to catch up on your conversations from nearly every one of the nineteen concurrent sessions, the keynote address, and the digital showcase.

Quantum entanglement Quantum entanglement is a physical phenomenon that occurs when pairs or groups of particles are generated or interact in ways such that the quantum state of each particle cannot be described independently – instead, a quantum state may be given for the system as a whole. Such phenomena were the subject of a 1935 paper by Albert Einstein, Boris Podolsky and Nathan Rosen,[1] describing what came to be known as the EPR paradox, and several papers by Erwin Schrödinger shortly thereafter.[2][3] Einstein and others considered such behavior to be impossible, as it violated the local realist view of causality (Einstein referred to it as "spooky action at a distance"),[4] and argued that the accepted formulation of quantum mechanics must therefore be incomplete. History[edit] However, they did not coin the word entanglement, nor did they generalize the special properties of the state they considered. Concept[edit]

Meditation Meditation is a practice in which an individual trains the mind or induces a mode of consciousness, either to realize some benefit[1] or as an end in itself.[2] The term meditation refers to a broad variety of practices (much like the term sports) that includes techniques designed to promote relaxation, build internal energy or life force (qi, ki, prana, etc.) and develop compassion,[3] love, patience, generosity and forgiveness. A particularly ambitious form of meditation aims at effortlessly sustained single-pointed concentration[4] single-pointed analysis,[5] meant to enable its practitioner to enjoy an indestructible sense of well-being while engaging in any life activity.

Psychological nativism In the field of psychology, nativism is the view that certain skills or abilities are "native" or hard-wired into the brain at birth. This is in contrast to empiricism, the "blank slate" or tabula rasa view, which states that the brain has inborn capabilities for learning from the environment but does not contain content such as innate beliefs.This factor contributes to the ongoing nature versus nurture dispute. Some nativists believe that specific beliefs or preferences are "hard wired". For example, one might argue that some moral intuitions are innate or that color preferences are innate. Six degrees of separation Six degrees of separation. Early conceptions[edit] Shrinking world[edit] After Accelerationism: The Xenofeminist Manifesto - &&& Journal&&& Journal It has arrived! The Laboria Cuboniks collective have just released their highly-anticipated manifesto, Xenofeminism: A Politics for Alienation, via their Twitter account. Already, it is being lauded by cultural critics such as Mark Fisher for “definitively grasp[ing] feminism back from the… hands of the moralising-spiteful petit-bourgeoisie,” and as indicative of “a new counterculture [that] is emerging from the shadows.” Rejecting originary authenticity, affirming technological alienation, and regrounding left accelerationism in its cyberfeminist antecedents, the xenofeminists have unleashed an alien storm system, one from which terrestrial subjectivities will not emerge unaltered. From XFM “Xenofeminism is gender-abolitionist… Let a hundred sexes bloom!