10 talks you won't be able to stop thinking about 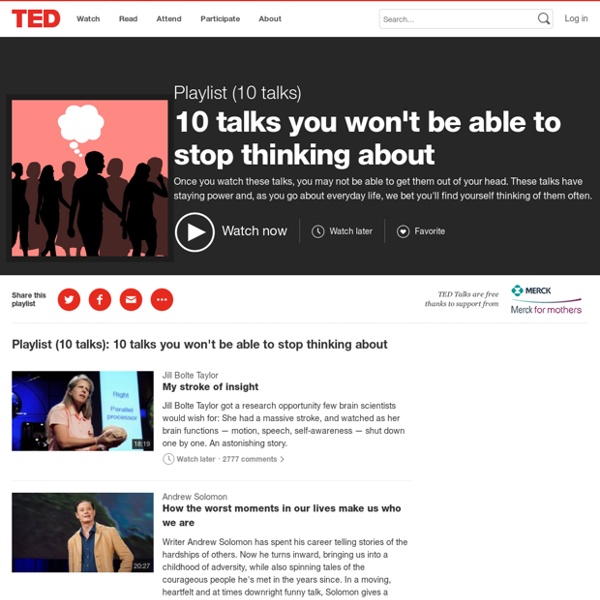 Now playing Here's a TED first: an animated Socratic dialog! In a time when irrationality seems to rule both politics and culture, has reasoned thinking finally lost its power? Watch as psychologist Steven Pinker is gradually, brilliantly persuaded by philosopher Rebecca Newberger Goldstein that reason is actually the key driver of human moral progress, even if its effect sometimes takes generations to unfold. The dialog was recorded live at TED, and animated, in incredible, often hilarious, detail by Cognitive.

10 tips for better slide decks When your slides rock, your whole presentation pops to life. At TED2014, David Epstein created a clean, informative slide deck to support his talk on the changing bodies of athletes. Photo: James Duncan Davidson/TED Aaron Weyenberg is the master of slide decks. Christmas, the System and I You and I constitute the very system that we blame for the world’s problems, which is starkly illustrated at Christmas when we rob our fragile earth on the high streets in the name of Jesus. What better way to celebrate the birth of Christ this year than to unite under the banner of freedom and justice, and peacefully demonstrate for an end to hunger and poverty across the world, writes Mohammed Mesbahi. When disappointed with our politicians and distressed by the problems within our society, we come under the impression that there is a kind of rotten system out there. Without hesitation, we criticise and blame the system.

12 pieces of advice for giving talks that have impact Courtney E. Martin hosts a session called “The 19th Minute,” and shared valuable insight on how to give a talk that has real impact. Photo: Marla Aufmuth/TED Sharing an idea isn’t like snapping your fingers — things don’t just instantly change. But as more people hear an idea over time, it can trickle into people’s thinking — and shifts, both subtle and extreme, can happen as a result. An Introvert's Guide to Networking Every week, I get invited to another “must attend” business event sure to be full of important people who could affect my business. I know I should go, but it’s a chore. All too often, I end up standing in a corner clinging to the one person I know, feeling guilty that I’m not taking advantage of the situation.

10 places where anyone can learn to code Teens, tweens and kids are often referred to as “digital natives.” Having grown up with the Internet, smartphones and tablets, they’re often extraordinarily adept at interacting with digital technology. But Mitch Resnick, who spoke at TEDxBeaconStreet, is skeptical of this descriptor. Sure, young people can text and chat and play games, he says, “but that doesn’t really make you fluent.” Mitch Resnick: Let's teach kids to code Fluency, Resnick proposes in this TED Talk, comes not through interacting with new technologies, but through creating them. The former is like reading, while the latter is like writing. 70+ book picks from TED speakers and attendees The tables in bookstores can be overwhelming: Every book cover looks appealing, every blurb glows with praise. Sometimes, you just need a recommendation from a human, someone you trust. Below, 10 members of the TED community — with very different points of view — share the books they think you’ll enjoy this summer.

Creating a New Mission Statement Photo Forget the New Year’s resolution. This year, try creating a personal mission statement instead. While it is common for businesses to define goals and values with mission statements, most people never take the time to identify their individual senses of purpose. Most focus on single acts of self-improvement — exercising more, eating more healthfully, spending more time with family — rather than examining the underlying reasons for the behavior, says Jack Groppel, co-founder of the Johnson & Johnson Human Performance Institute, an Orlando-based coaching firm. “A resolution is a well-intended action plan, but because a person hasn’t really connected to the ‘why’ behind it, the old way of life, the chaos, comes back into play and they can’t really sustain it,” says Dr.

Talks to watch when someone just stomped on your heart Now playing We'll go to the doctor when we feel flu-ish or a nagging pain. So why don’t we see a health professional when we feel emotional pain: guilt, loss, loneliness? Too many of us deal with common psychological-health issues on our own, says Guy Winch. How to give a persuasive presentations: A Q&A with Nancy Duarte Stepping onto the TED or TEDx stage — or speaking in front of any group of people, for that matter — is truly nerve-wracking. Will you remember everything you wanted to say, or get so discombobulated that you skip over major points? Will the audience be receptive to your ideas, or will you notice a guy in row three nodding off to sleep? Presentation expert Nancy Duarte, who gave the TED Talk “The secret structure of great talks,” has built her career helping people express their ideas in presentations.

21 Short Videos Worth More Than an MBA If you're determined to get a job that requires an MBA, by all means spend the time and money to get one. However, if you want to know more about business than 99.9 percent of your colleagues, you can spend a day watching these TED Talks. Motivation The Most Important Lesson in College: How to Learn by Robert Montenegro Jeffrey J. Selingo writes today in The Washington Post that too many college graduates are entering the workforce without the skills employers are looking for. He cites polls and other pieces of evidence indicating that a whole lot of people attending college today are more or less just there to eat their lunch.

The 25 Most Visually Stunning Films of The Past 5 Years When someone mentions “visually stunning films”, it’s easy to associate this with films that lack real content, and instead are based mainly on images without portraying anything truly significant. The fact that these films are so relevant visually doesn’t mean that they don’t still tell a great story. In fact, most of the films here are also considered some of the best from the last four years, and with reason.