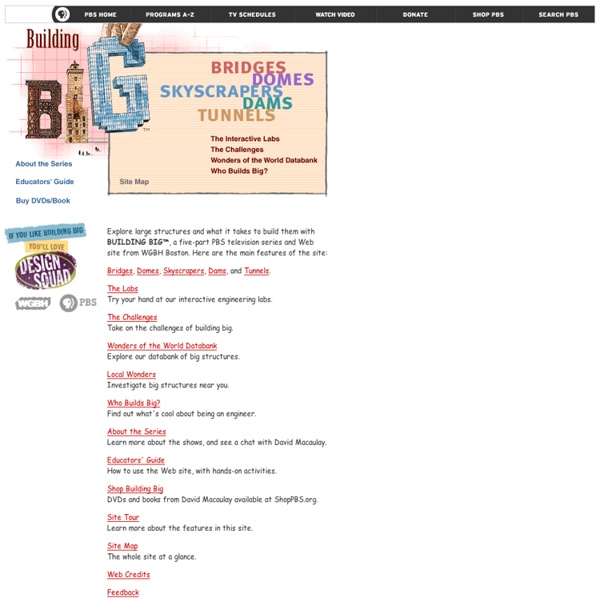 Explore large structures and what it takes to build them with BUILDING BIG™, a five-part PBS television series and Web site from WGBH Boston. Here are the main features of the site: Bridges, Domes, Skyscrapers, Dams, and Tunnels. The Labs Try your hand at our interactive engineering labs. The Challenges Take on the challenges of building big. Wonders of the World Databank Explore our databank of big structures. Local Wonders Investigate big structures near you. Who Builds Big? About the Series Learn more about the shows, and see a chat with David Macaulay. Educators' Guide How to use the Web site, with hands-on activities. Shop Building Big DVDs and books from David Macaulay available at ShopPBS.org. Site Tour Learn more about the features in this site. Site Map The whole site at a glance. Web Credits Feedback Help

Critter Catalog Here is information about many common animals found in Michigan, and a few that live in other places. You could find many of these animals in or around your schoolyard. Remember that this is just a little bit of animal biodiversity. There are many many other kinds of animals in other places. Mammals, birds, reptiles, amphibians, and fish are all vertebrates - they have a "spinal column" made up of many bones. While vertebrates are more familiar to most people, there are many, many more species of invertebrates. For simplicity's sake, we have presented six main groups of invertebrates, distinguished by the number of legs they have.

Engineering in Sports - Lesson Summary Imagining themselves arriving at the Olympics gold medal soccer game in Beijing, students begin to think about how engineering is involved in sports. After a discussion of kinetic and potential energy, an associated hands-on activity gives students an opportunity to explore energy-absorbing materials as they try to protect an egg from being crushed. Engineering Connection Companies spend millions of dollars on research and hiring engineers specializing in aerodynamics, materials and other specialties in hopes of gaining a product edge. Educational Standards Each TeachEngineering lesson or activity is correlated to one or more K-12 science, technology, engineering or math (STEM) educational standards. All 100,000+ K-12 STEM standards covered in TeachEngineering are collected, maintained and packaged by the Achievement Standard Network (ASN), a project of JES & Co. Click on the standard groupings to explore this hierarchy as it applies to this document. Learning Objectives Assessment

Plants & History Ever since Early Man rubbed two sticks together to make fire, plants have played a vital role in the history of mankind. The cultivation of grain changed nomads into village dwellers, wooden boats allowed civilisations to explore new lands, and precious spices were used from earliest times to trade between nations. Later on, it was Christopher Columbus’s search for new spice routes that led to his discovery of the Americas and their colonisation by Europeans. Plants have been used as medicines, but also as instruments of death. A plant allegedly even influenced the laws of physics! Plants have had far-reaching effects on many civilisations, the impact of which we still feel today. See the top 10 plants that we think have made the biggest difference to this category.