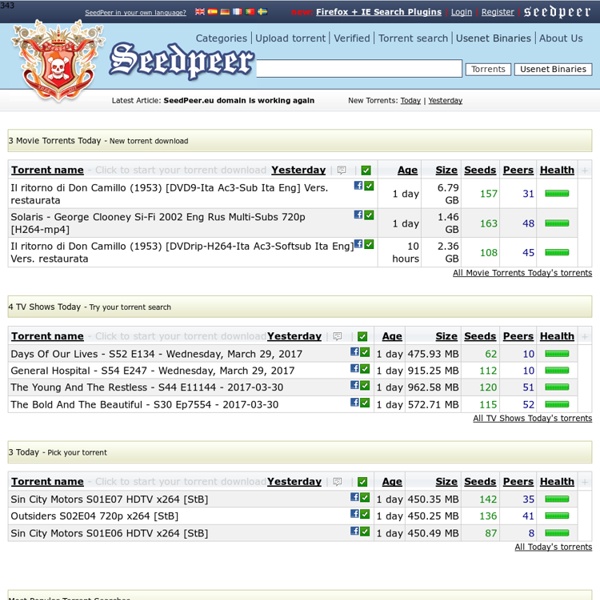 BTDigg, The First ‘Trackerless’ Torrent Search Engine The Internet is filled with thousands of BitTorrent sites which all search through databases containing millions of torrent files. Today these sites are joined by a new one - BTDigg. However, unlike more traditional torrent search engines, BTDigg searches through files that are found on BitTorrent's DHT network, which is rather unique. According to the site's founders this is a much needed step to further decentralize BitTorrent. To fully grasp the novelty of the newly launched DHT search engine BTDigg, one needs to have some basic knowledge of how regular BitTorrent search engines work. In short, all search engines search through a database of .torrent files, either uploaded by users of their own site, or pulled from other places on the web.

Torrentbit.net - search torrents, download torrents, torrent download - NO ADS - Enjoy! The Pirate Bay is immune to SOPA Over on Techdirt, Mike Masnick has pointed out the mother of all ironies: The Pirate Bay, one of the largest outlets of copyright infringement, would be immune to the takedown tendrils of the imminently incoming Stop Online Piracy Act (SOPA). Apparently it all comes down to the fact that The Pirate Bay has a .org domain — and according to Masnick, the current version of the SOPA bill working its way through congress excludes American domestic domains from being the target of takedown notices from copyright holders. In this case, a “domestic domain” is any domain that comes from a TLD run by an American registry — and sure enough, .org’s registry is Public Interest Registry, a US non-profit based in Virginia.

200K Verified Torlock was created with one thing in mind... THE USER. For too long we saw good sites go bad with all the fake stuff out there.We know how annoying it is for a user to go through all the fake torrents in order to find the real ones, so we decided to provide theuser with a "clean" experience. When downloading from Torlock you know that you are downloading the real thing. Download movies, Download music, Download Ebooks - AllContentAccess USERS ONLINE: 8396 AVERAGE DOWNLOAD SPEED: 3945 KB/ s TOTAL FILES: 3698434 NEW FILES: 1965 Find Files and Download Faster Than Ever Before » Unlimited Downloads

Torrent Butler, Serving Movie Torrents With Class It isn't often that a new torrent site comes along and actually manages to impress, but Torrent Butler is certainly one worthy of note. The site offers a wide range of movies, presented in a way that's quite refreshing and unique. Born out of frustration with "authorized" movie download sites, Torrent Butler may both frighten and inspire the MPAA's major movie studios. Torrent Butler is one of those sites that is better explained by visiting, rating than describing it.

Torrentzap.com torrent downloads - Torrents at best! The Pirate Bay The Pirate Bay (commonly abbreviated TPB) is a website that provides magnet links to facilitate peer-to-peer file sharing using the BitTorrent protocol. The Pirate Bay is the most-used File Sharing site on the World Wide Web. [2]It was founded in Sweden in 2003. In 2009, the website’s founders were found guilty in Sweden for facilitating illegal downloading of copyrighted material. In some countries, ISPs have been ordered to block access to the website. Since then, proxies have been made all around the world providing access to The Pirate Bay.[3] History[edit]

YourBittorrent - Share Your Gold and SilverTorrents isoHunt For years isoHunt's founder had been in legal battles with conglomerates of IP rights holders over allegations of copyright infringing activity. A settlement with MPAA was reached in 2013, that stipulated $110 million reimbursement for damages and the site's closure that followed on October 21, 2013. By the end of October, 2013 two sites with content presumably mirrored from isohunt.com were reported in computer media. One of them — isohunt.to — became a de facto replacement of the original site. History[edit] Comparison of BitTorrent sites There are many different BitTorrent websites. They typically contain multiple torrent files and an index of those files. In a typical scenario, a user would enter such a site and browse or search for the content they desire, based on the torrent descriptions posted at the site by other users.

thanks, only in the early stages of this site but learning more and more every time i go on here. cheers by jasonbirch Feb 6