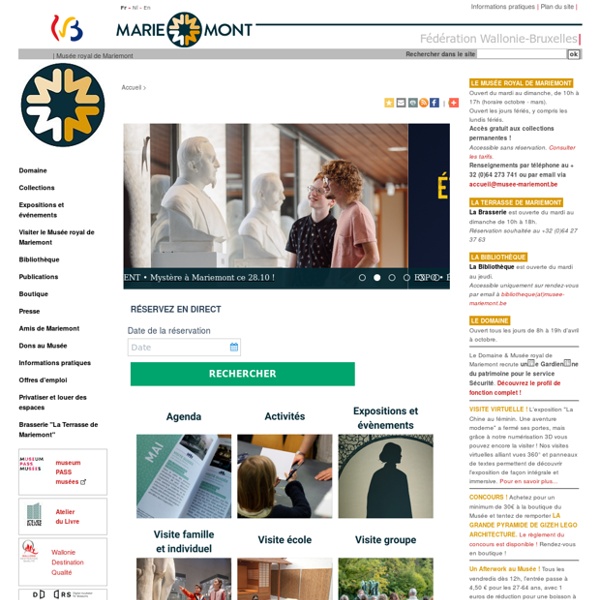 Wikipedia The Egyptian Museum of Berlin (German: Ägyptisches Museum und Papyrussammlung) is home to one of the world's most important collections of Ancient Egyptian artifacts. The collection is part of the Neues Museum. History[edit] Phoebe A. Hearst Museum of Anthropology Phoebe Hearst met George A. Reisner on her first trip to Egypt in early 1899. While the American Egyptologist had no excavating experience at this time, Hearst had faith in his abilities and sent him to work immediately. With several assistants and a large and skilled Egyptian crew, Reisner explored the sites of Coptos and Shurafa (1899–1900), El Ahaiwah (1900), Deir el-Ballas (1900–1), Naga ed-Deir (1901–4), and Giza (1903–5). Much of the work was salvage, following in the wake of looters.

Wikipedia The Museum of Fine Arts of Lyon ((French) Musée des beaux-arts de Lyon) is a municipal museum of fine arts in the French city of Lyon. It is housed near place des Terreaux in a former Benedictine convent of the 17th and 18th centuries. It was restored between 1988 and 1998, and despite these important restoration works it remained open to visitors. Its collections range from ancient Egypt antiquities to the Modern art period and make the museum one of the most important in Europe. It hosts important exhibitions of art : recently there have been exhibitions of works by Georges Braque and Henri Laurens (second half of 2005), then one on the work of Théodore Géricault (April to July 2006). Buildings[edit]

Egyptological Institute in Egypt: Graduate Program The Natacha Rambova Archive, Yale University Archive: Overview1 Born Winifred Kimball Shaughnessy on January 19, 1897, Natacha Rambova pursued a number of diverse careers, in each achieving considerable — and in some cases lasting — success. Unfortunately, her true contributions to the field of Egyptology are not as well known as her other pursuits. Dutch National Museum of Antiquities On this search page you can see more than 40,000 objects from the collection of the Rijksmuseum van Oudheden. The data base is still expanding and contains objects from all collection aereas of the museum: ancient Egypt, Classical World (Greeks, Romans, Etruscans), ancient Near East and the early Netherlands (until 1600 AD). For application of loans, please contact the museum's registrar. The database is only available in Dutch. Use Dutch keywords for searching.

Roemer-Pelizaeus Hildesheim The third part of the permanent exhibition focuses on some of the ancient Egypt antiquities, that can be seen as the most important source of knowledge about this culture: The belief in an afterlife. Organized into the areas “Man” and “Animal”, the exhibition picks up the two most important forms of burial, because in Egyptian belief the eternal accommodation of animals, which represent various Gods, is as important as that of men. Impressive examples show the architecture of private people’s tombes, among them the offering chapel from the Mastaba of Uhemka. Coffins, mummies, masks from different eras, amulets and shabtis represent the ideal burial equipment and illustrate the process of mummification. Special attention is given to the individual, which splits up into different aspects of identity after death and has to overcome many dangers to get into the fields of the blessed.

Deir el-Medina stelae in the Egyptian Museum in Turin Stele of Amennakhte19th dynasty, around 1295-1186 BCLimestoneRectangular limestone stela of Amennakht, possibly originating from the sanctuary of Ptah and Meretseger. Most probably intended to depict the sanctuary with its two hills. The relief ornamentation of the four sacred cobras in the upper part of the stela is intended to be a symbolic representation of the "Great Peak of the West". The goddess shown on the right, personifies the peak, and is called "Isis the Great". She is depicted with bovine horns and a solar disk like Hathor. Amennakht is shown kneeling inside a rectangle that was intended to represent a chapel in the sanctuary.Height: 43 cmWidth: 30 cmFormerly from Drovetti's collectionInv. cat. 1521 = CGT 50059

Wikipedia The museum's home in the reopened building of the Alte Nikolaischule. The Museum of Antiquities of the University of Leipzig (German: Antikenmuseum der Universität Leipzig) is a collection of antiques in Leipzig, Germany. History[edit] Woking College Loan Share on facebook Woking College Loan A collection of over 50 ancient Egyptian objects travelled from Surrey to Swansea, and arrived at the the Egypt Centre today (31st May 2012). Egyptology Collection – The Atkinson The Goodison collection of Egyptology contains around 1,000 artefacts and represents both funerary and domestic objects dating from the Predynastic Period (before 3100BC) to the Coptic Period (around 200AD). This collection was an important feature of the Bootle Free Library and Museum, which opened to the public in June 1887. When the museum closed in 1974, most of the objects were brought to Southport for storage.

Online DB Registration numbers The most common type of Museum number begins with the year of acquisition. The database standardises these numbers in the form, for example: 1887,0708.2427 (year: comma: block of four numbers - usually representing a month and day: full-stop and final number). The final number can be of any length and may be followed by another full-stop and a sub-number. In some cases the same number is shared by two or more objects across departments. In some of these cases a prefix has been added before a number (e.g.