500 Prompts for Narrative and Personal Writing 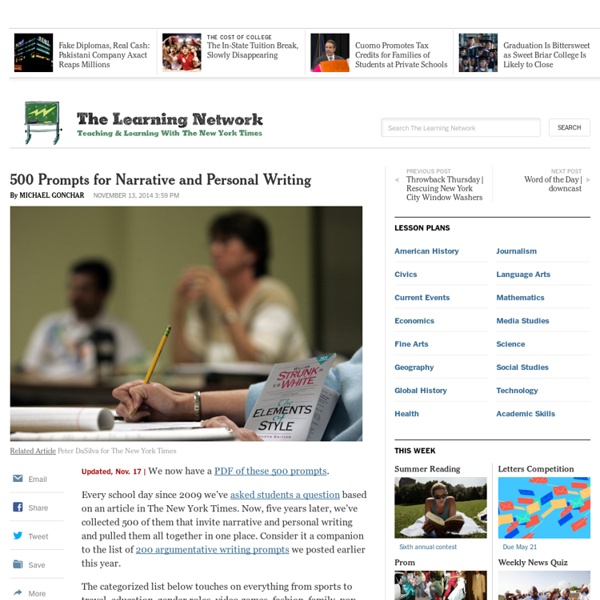 Home | Write About This 20 Terrifying Two-Sentence Horror Stories That Will Keep You Up At Night. #7 Gave Me Chills If you're looking for a horrifying story that will keep you up tonight, don't waste all that time watching a horror movie. Here are twenty terrifying horror stories wrapped up in two sentences or less. 1. I woke up to hear knocking on glass. At first, I thought it was the window until I heard it come from the mirror again. 2. 3. 4. 5. 6. 7. 8. 9. 10. 11. 12." 13. 14. 15. 16. 17. 18. 19. 20. Share this with your friends by clicking below! Writing Prompts, Blogging Prompts, Story Topic Generators, Photo Inspiration Writing : Creative Writing & Blogging Prompts Topic Starters, Picture Prompts, and Thought-Provoking Questions for You to Answer "The best learning comes in the doing, and writing from prompts engenders doing."— Judy Reeves Many writers and bloggers seek out articles, prompts, and story starters to get their creative juices flowing. We've also listed recommended resources outside of our domain featuring more free writing prompts, story starters, daily writing exercises, visual art prompts, and writing topic generators. Writing & Photo Prompts, Tools, & Generators on Creativity Portal "Novels, short stories, flash fictions, memoirs, personal narrative and creative nonfiction, even poetry — all have found publication from their start as writing prompts." — Judy Reeves Take Ten for Writers Exercises Get creative with these exercises from Bonnie Neubauer's Take Ten for Writers! Brickstorming Your Legacy Brick What would you write on your legacy brick in 3 lines with 14 characters each?

297 Flabby Words and Phrases That Rob Your Writing of All Its Power You’re not stupid. You know what writing is truly about. It’s a never-ending battle for your readers’ attention. Every sentence is a link in a taut chain that connects your headline to your conclusion. And you are just one weak sentence away from losing your reader forever. So you take your craft quite seriously. You ignore all but your best ideas. You work on each piece of writing for exactly as long as necessary to get it right. And you edit until your words are crisp and clear. But what if that isn’t enough? What if weaknesses remain that are almost impossible to spot? The Subtle Attention Killers That Hide in Plain Sight No matter how carefully you scrutinize your writing, subtle problems will remain. Certain words and phrases are so commonplace – and so seemingly benign – that they glide unnoticed under your editing radar. But these words and phrases can silently erode your reader’s attention. They don’t stand out. But they weaken your writing and dilute your ideas. So bookmark this post.

Dos and Don'ts For Fantasy/Sci-Fi Writers Dos and Don'ts For Fantasy/Sci-Fi Writers Fantasy Specific Writing good, well thought-out fantasy can be a challenging process, especially when featuring a setting or race completely different from that which is familiar to the author. There are a myriad of places within a story where a writer can falter and insert details which are not well enough developed, uncharacteristic, confusing, or which simply don't make sense in the context of the setting. This list is meant to point out some of these common areas of confusion and tell what can be done to be more aware of and correct any potential inconsistencies. Remember that these are all only suggestions, and not everything on the list applies to every story. Still, everyone can take something from these suggestions, which might prove useful at some point in the future, in their writing. Don't: Reference Earth Changing the wording is also a good way to give a foreign feeling to the familiar. Again, think: what is important in this society?

8 ½ Character Archetypes You Should Be Writing Here’s the thing about character archetypes: everybody’s got his own take. Do you run with Joseph Campbell’s gazillion and one Jungian archetypes? How about Dramatica’s double quad of eight archetypes? Or maybe screenwriter Michael Hauge’s simple offering of four main players? Nothing wrong with running with all of them. Today, we’re going to explore my take, which is primarily based on Dramatica’s eight characters. 1. This one doesn’t need much explanation. The main actor.The person most greatly affected by the Antagonist.The person whose reactions and actions drive the majority of the plot.The person with whom the readers will identify most strongly.The person whose inner journey, as influenced by the outer conflict, will be the most obvious manifestation of your story’s theme. Examples Ebenezer Scrooge in A Christmas Carol, Lightning McQueen in Cars, Bruce Wayne in Batman Begins, Mattie Ross in True Grit 2. This one’s also pretty clear. 3. 4. 5. 6. Doc Hudson in Cars, Col. 7. 8. Mr.

Screenwriting.info: How to Write a Screenplay 60 Awesome Search Engines for Serious Writers June 20th, 2010 Finding the information you need as a writer shouldn’t be a chore. Luckily, there are plenty of search engines out there that are designed to help you at any stage of the process, from coming up with great ideas to finding a publisher to get your work into print. Both writers still in college and those on their way to professional success will appreciate this list of useful search applications that are great from making writing a little easier and more efficient. Professional Find other writers, publishers and ways to market your work through these searchable databases and search engines. Writing These helpful tools will help you along in the writing process. Research Try out these tools to get your writing research done in a snap. Google Scholar: With this specialized search engine from Google, you’ll only get reliable, academic results for your searches.WorldCat: If you need a book from the library, try out this tool. Reference Need to look up a quote or a fact? Niche Writers