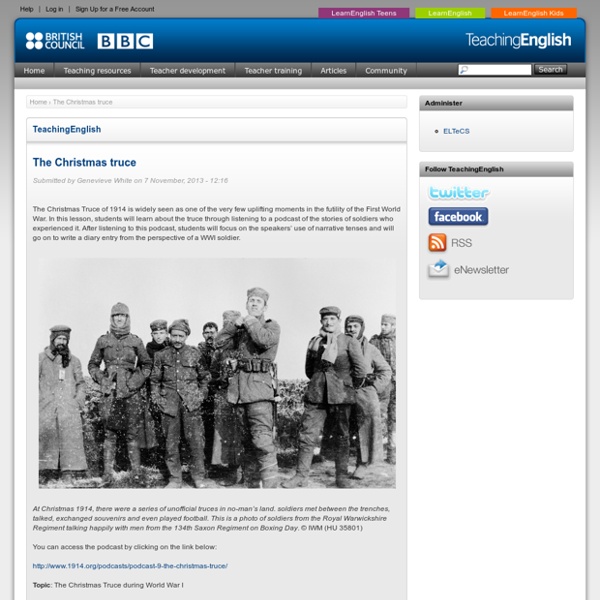 The Christmas Truce of 1914 is widely seen as one of the very few uplifting moments in the futility of the First World War. In this lesson, students will learn about the truce through listening to a podcast of the stories of soldiers who experienced it. After listening to this podcast, students will focus on the speakers’ use of narrative tenses and will go on to write a diary entry from the perspective of a WWI soldier. At Christmas 1914, there were a series of unofficial truces in no-man’s land. soldiers met between the trenches, talked, exchanged souvenirs and even played football. This is a photo of soldiers from the Royal Warwickshire Regiment talking happily with men from the 134th Saxon Regiment on Boxing Day. © IWM (HU 35801) You can access the podcast by clicking on the link below: Topic: The Christmas Truce during World War I Level: B2 Time: 90 minutes Aims: Copyright - please read All the materials on these pages are free for you to download and copy for educational use only.

As it happened — Kailash Satyarthi, Malala Yousafzai receive Nobel Peace Prize So we must work ... and not wait. I call upon my fellow children to stand up around the world. Dear sisters and brothers, let us become the first generation to decide to be the last. The empty classrooms, the lost childhoods, wasted potential—let these things end with us. Let this be the last time that a boy or a girl spends their childhood in a factory. Dr. Martin Luther King Jr. Articles & Videos Skip to main content <div id="nojs-warning">WARNING: Javascript must be enabled for the correct page display</div> Sign InRegister ReadWorks.org

Facts on the Nobel Peace Prizes The three most common searches on individuals in the Nobel Peace Prize nomination database are Adolf Hitler, Mahatma Gandhi and Joseph Stalin. Joseph Stalin, the Secretary General of the Communist Party of the Soviet Union (1922-1953), was nominated for the Nobel Peace Prize in 1945 and 1948 for his efforts to end World War II. Mahatma Gandhi, one of the strongest symbols of non-violence in the 20th century, was nominated in 1937, 1938, 1939, 1947 and, finally, shortly before he was assassinated in January 1948. Although Gandhi was not awarded the Prize (a posthumous award is not allowed by the statutes), the Norwegian Nobel Committee decided to make no award that year on the grounds that "there was no suitable living candidate". Read more about "the missing Laureate" Adolf Hitler was nominated once in 1939.

The Heroine and the Holocaust - Teachers - History's HEROES from E2BN This teaching idea is designed for use at KS 3 history. Why use this unit? Often, a good way into a topic is via one small section of it. Malala Nobel Peace Prize Acceptance Speech - Business Insider ScreenshotMalala Yousafzai accepting her Nobel Peace Prize in Oslo, Norway. Malala Yousafzai, a 17-year-old Pakistani girl, gave an incredible speech as she accepted her Nobel Peace Prize in Oslo, Norway on Wednesday after becoming an icon of the fight for children's education rights. She just became the youngest Nobel Peace Prize laureate in history, and her speech shows her spectacular wisdom. From a young age, Yousafzai made a name for herself in her community as someone who was unafraid to criticize the Taliban. She has been especially critical of terrorist attempts to prevent young girls from getting an education in Pakistan and elsewhere.

Profile: Malala Yousafzai Image copyright Reuters It has only been five years since Pakistani schoolgirl Malala Yousafzai wrote an anonymous diary about life under Taliban rule in north-west Pakistan. Since then she has been shot in the head by the militants, and has become the youngest person ever to win the Nobel Peace Prize. Accepting the award in Oslo on 10 December, she said she was "humbled" and proud to be the first Pashtun and the first Pakistani to win the prize.

Story of Stuff The Story of Stuff, originally released in December 2007, is a 20-minute, fast-paced, fact-filled look at the underside of our production and consumption patterns. The Story of Stuff exposes the connections between a huge number of environmental and social issues, and calls us together to create a more sustainable and just world. It’ll teach you something, it’ll make you laugh, and it just may change the way you look at all the Stuff in your life forever. Download the Fact Sheet Credits

Erkin Musaev In 2006, former Ministry of Defence official Erkin Musaev was boarding a flight from his Uzbekistan to Kyrgyzstan, where he was due to attend a conference. Before take-off, Erkin was detained by Uzbekistan's National Security Service (SNB) and held incommunicado for several weeks. His family had no idea where he was or whether he was even alive. It would be four more months until they would see him again. ‘While we had been searching for Erkin, he was being brutally tortured.

Holocaust Memorial Day: remembering horror of Auschwitz 70 years on The site was also the death place for many people who did not fit into the Nazis' view of their world. Poles, lesbians, homosexuals and the disabled were amongst those also killed here. Over one and a half million people were killed at Auschwitz, including women and children The infamous sign, made by a prisoner, was erected by the Nazis after the Auschwitz barracks were converted into a labour camp to house Polish resistance fighters in 1940. Auschwitz was later expanded into a vast death camp Australian comedian perfectly sums up why other countries think US gun laws a... At least 14 people were killed and 18 others injured when two shooters opened fire on at the Inland Regional Center, a social services provider for people with disabilities, in San Bernardino Wednesday, December 2. The shooters have been identified as Syed Farook, 28, and Tashfeen Malik, 27, who were in a relationship with each other. Motives are still unclear.

24 Best Poems to Teach in Middle and High School It can be hard to know which poems will spur your middle and high schoolers into deep, meaningful discussion and which will leave them, ahem, yawning. So we asked experienced teachers to share their favorites—the punch-in-the-gut poems that always get a reaction, even from teens. Here's what they had to say. Anne Frank Who Was Anne Frank? During the two years and one month Anne Frank spent hiding in a Secret Annex in Amsterdam during World War II, she kept a diary. Anne Frank's diary, which was published by her father after the war and has been read by millions of people around the world, chronicles both the tensions and difficulties of living in such a confined space for that long a duration as well as Anne's struggles with becoming a teenager. Since the publication of her diary, Anne Frank has become a symbol of the children that were murdered in the Holocaust. Dates: June 12, 1929 -- March 1945 Also Known As: Annelies Marie Frank