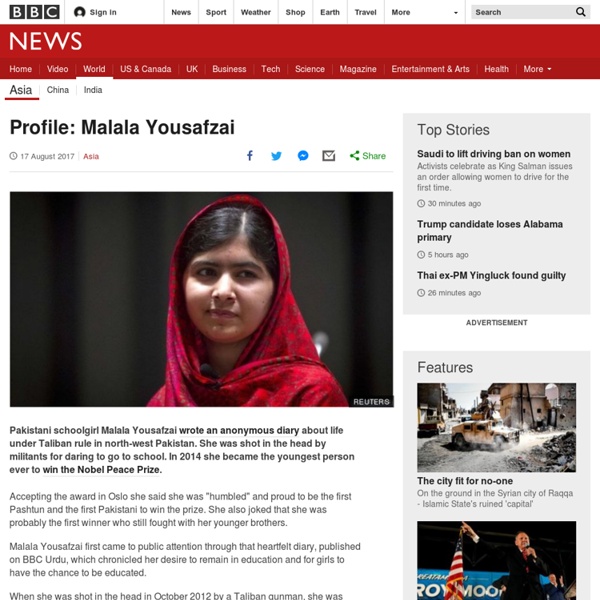 Image copyright Reuters Pakistani schoolgirl Malala Yousafzai wrote an anonymous diary about life under Taliban rule in north-west Pakistan. She was shot in the head by militants for daring to go to school. In 2014 she became the youngest person ever to win the Nobel Peace Prize. Accepting the award in Oslo she said she was "humbled" and proud to be the first Pashtun and the first Pakistani to win the prize. Malala Yousafzai first came to public attention through that heartfelt diary, published on BBC Urdu, which chronicled her desire to remain in education and for girls to have the chance to be educated. When she was shot in the head in October 2012 by a Taliban gunman, she was already well known in Pakistan, but that one shocking act catapulted her to international fame. She survived the dramatic assault, in which a militant boarded her school bus in Pakistan's north-western Swat valley and opened fire, wounding two of her school friends as well. Image copyright Birmingham Hospitals Trust Related:  Human rights assignment • PYP EXHIBITION 2018

Desmond Tutu - Archbishop - Biography.com Desmond Tutu is a South African Anglican cleric who is known for his role in the opposition to apartheid in South Africa. Synopsis In 1978 Desmond Tutu was appointed general secretary of the South African Council of Churches and became a leading spokesperson for the rights of black South Africans. During the 1980s he played an unrivaled role in drawing national and international attention to the iniquities of apartheid, and in 1984 he won the Nobel Prize for Peace for his efforts. Early Life Desmond Mpilo Tutu was born on October 7, 1931 in Klerksdorp, South Africa. "We knew, yes, we were deprived," he later recalled. Tutu was a bright and curious child with a passion for reading. Tutu graduated from high school in 1950, and although he had been accepted into medical school, his family could not afford the expensive tuition. Rise to Prominence Nevertheless, Tutu became increasingly frustrated with the racism corrupting all aspects of South African life under apartheid. Personal Life

Desmond Tutu Bishop Desmond Tutu was born in 1931 in Klerksdorp, Transvaal. His father was a teacher, and he himself was educated at Johannesburg Bantu High School. After leaving school he trained first as a teacher at Pretoria Bantu Normal College and in 1954 he graduated from the University of South Africa. After three years as a high school teacher he began to study theology, being ordained as a priest in 1960. The years 1962-66 were devoted to further theological study in England leading up to a Master of Theology. Desmond Tutu has formulated his objective as "a democratic and just society without racial divisions", and has set forward the following points as minimum demands: 1. equal civil rights for all 2. the abolition of South Africa's passport laws 3. a common system of education 4. the cessation of forced deportation from South Africa to the so-called "homelands" This autobiography/biography was written at the time of the award and first published in the book series Les Prix Nobel.

Khaled Hosseini, M.D. Your English is virtually unaccented and perfectly fluent, and you write in English. Where did that fluency come from? Khaled Hosseini: I think part of it is youth. As a teenager in America, you really have to learn the idiom, you have to learn the slang fast so you can fit in, right? Khaled Hosseini: Fitting in in the U.S. when we first moved here — boy, that was quite a difficulty, because I moved to the States when I was 15, and 15 is a strange enough age, regardless of who you are and where you are. You are neither a child nor an adult. Khaled Hosseini: It’s a cliché, but it’s really true. I went to high school — my family moved to the U.S. in September of ’80, and two weeks later, I was in high school in a regular English language class. Can you talk about the decision to write your novels in English? Khaled Hosseini: When I started writing The Kite Runner, the novel, which was in March of 2001, by then I had been in the States for over 20 years. You ended up going into biology.

Malala Yousafzai - Children's Activist, Women's Rights Activist As a young girl, Malala Yousafzai defied the Taliban in Pakistan and demanded that girls be allowed to receive an education. She was shot in the head by a Taliban gunman in 2012, but survived and went on to receive the Nobel Peace Prize. Synopsis Malala Yousafzai was born on July 12, 1997, in Mingora, Pakistan. As a child, she became an advocate for girls' education, which resulted in the Taliban issuing a death threat against her. Early Life On July 12, 1997, Malala Yousafzai was born in Mingora, Pakistan, located in the country's Swat Valley. Initial Activism Yousafzai attended a school that her father, Ziauddin Yousafzai, had founded. In early 2009, Yousafzai began blogging for the BBC about living under the Taliban's threats to deny her an education. With a growing public platform, Yousafzai continued to speak out about her right, and the right of all women, to an education. Targeted by the Taliban After the Attack In October 2015, a documentary about Yousafzai's life was released.

Women and Girls in Afghanistan — Razia's Ray of Hope For nearly three decades, the people of Afghanistan have been subjected to a succession of brutal wars, from the Soviet occupation (1979–1989) to a period of tribal civil wars (1990–1996) and the oppressive rule of the Taliban (1996–2001). These conflicts have left Afghanistan’s infrastructure and economy devastated, making it one of the poorest countries in the world. Prior to the Soviet occupation and Taliban takeover, Afghanistan was a relatively liberal country with a progressive outlook on women’s rights. Afghan women comprised 50% of government workers, 70% of schoolteachers, and 40% of doctors in Kabul. Women and girls have often been the worst victims of conflict. Since the US-led invasion, however, Afghanistan has experienced some dramatic changes. Despite these relative improvements, the country today stands at a tipping point. Islamic fundamentalism continues to influence the Afghan government’s policies on women’s rights.

Collaborating for Indigenous Rights 1957-1973 Long-distance running A group of amateur runners in a long-distance race in Switzerland. Burton Holmes' photograph entitled "1896: Three athletes in training for the marathon at the Olympic Games in Athens". Long-distance running, or endurance running, is a form of continuous running over distances of at least three kilometres (1.86 miles). Physiologically, it is largely aerobic in nature and requires stamina as well as mental strength.[1] Among mammals, humans are well adapted for running significant distances, and particularly so among primates. In modern human society, long-distance running has multiple purposes: people may engage in it for physical exercise, for recreation, as a means of travel, for economic reasons, or for cultural reasons. In the sport of athletics, long-distance events are defined as races covering three kilometres (1.86 miles) and above. History[edit] Prehistoric running[edit] Hunting[edit] Ancient History[edit] Messengers[edit] Physiology of long-distance running[edit] In sport[edit]

Mahatma Gandhi - Biography - Anti-War Activist Early Life Indian nationalist leader Mohandas Karamchand Gandhi, more commonly known as Mahatma Gandhi, was born on October 2, 1869, in Porbandar, Kathiawar, India, which was then part of the British Empire. His father, Karamchand Gandhi, served as a chief minister in Porbandar and other states in western India. His mother, Putlibai, was a deeply religious woman who fasted regularly. Gandhi grew up worshiping the Hindu god Vishnu and following Jainism, a morally rigorous ancient Indian religion that espoused non-violence, fasting, meditation and vegetarianism. Young Gandhi was a shy, unremarkable student who was so timid that he slept with the lights on even as a teenager. In 1885, Gandhi endured the passing of his father and shortly after that the death of his young baby. Upon returning to India in 1891, Gandhi learned that his mother had died just weeks earlier. Spiritual and Political Leader Gandhi formed the Natal Indian Congress in 1894 to fight discrimination. The Salt March

Eight Ways Teachers Can Advocate for Social Justice A MiddleWeb Blog This is not the piece I planned for the inaugural post on this blog. I wanted to write about creating a culture of joy in our classrooms. I still do. In our work as teachers, there are times when we have to put our plans aside and dive into that teachable moment. This new MiddleWeb blog is called “Heart of the School.” I write this in the immediate wake of racists gathering in Charlottesville and chanting about taking “our country back.” Below are eight practical steps you can take, using the leverage you have as an educator to help society land on the side of justice and equity. 1. Make sure you are identifying yourself as anti-racist. Similarly, speak up! Some say that posting your views on social media isn’t enough. In fact, studies have shown that movements happen when people feel that others think the way they do. 2. Read, watch, ask questions, discuss. Next up on my to-read list is Tears We Cannot Stop: A Sermon to White America, by scholar Michael Eric Dyson. 3.

Eleanor Roosevelt "What other single human being has touched and transformed the existence of so many? She walked in the slums and ghettos of the world, not on a tour of inspection, but as one who could not feel contentment when others were hungry." — Adlai E. Stevenson Eleanor Roosevelt has been called one of the 20th century's most influential women. She was a wife, mother, teacher, first lady of New York, first lady of the country, newspaper columnist, author, world traveler, diplomat, and seasoned politician. Anna Eleanor Roosevelt was born on October 11, 1884, into one of the oldest and wealthiest families in New York. Not long afterward, her mother died suddenly of diphtheria. When Eleanor was 15, her grandmother decided to send her to Allenswood, a boarding school in England. After three years at Allenswood, Eleanor returned to New York. Upon her "coming out" in 1902, several young men started to court her. Franklin proposed in November 1903. In 1906, the Roosevelt's first child, Anna, was born.

South Asia | Diary of a Pakistani schoolgirl Private schools in Pakistan's troubled north-western Swat district have been ordered to close in a Taleban edict banning girls' education. Militants seeking to impose their austere interpretation of Sharia law have destroyed about 150 schools in the past year. Five more were blown up despite a government pledge to safeguard education, it was reported on Monday. The night was filled with the noise of artillery fire and I woke up three times. Today is 15 January, the last day before the Taleban's edict comes into effect, and my friend was discussing homework as if nothing out of the ordinary had happened. Today, I also read the diary written for the BBC (in Urdu) and published in the newspaper. My father said that some days ago someone brought the printout of this diary saying how wonderful it was. I was in a bad mood while going to school because winter vacations are starting from tomorrow. In the past the reopening date was always announced clearly.