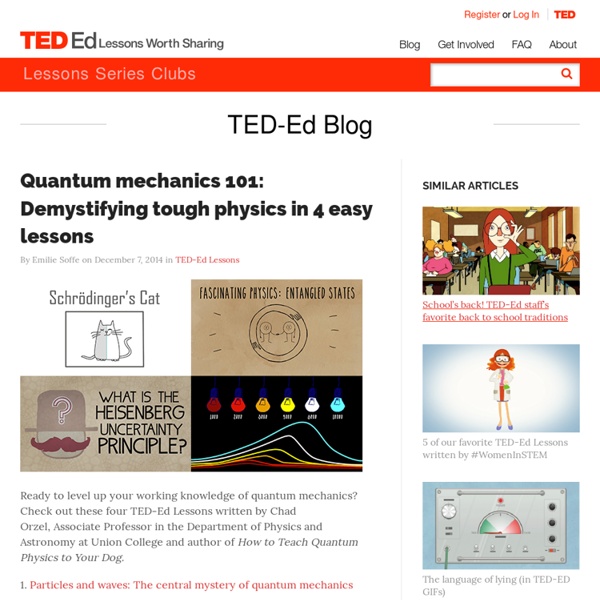 Ready to level up your working knowledge of quantum mechanics? Check out these four TED-Ed Lessons written by Chad Orzel, Associate Professor in the Department of Physics and Astronomy at Union College and author of How to Teach Quantum Physics to Your Dog. 1. Particles and waves: The central mystery of quantum mechanics One of the most amazing facts in physics is that everything in the universe, from light to electrons to atoms, behaves like both a particle and a wave at the same time. But how did physicists arrive at this mind-boggling conclusion? 2. Austrian physicist Erwin Schrödinger, one of the founders of quantum mechanics, posed this famous question: If you put a cat in a sealed box with a device that has a 50% chance of killing the cat in the next hour, what will be the state of the cat when that time is up? 3. When you think about Einstein and physics, E=mc^2 is probably the first thing that comes to mind. 4.

Physics: Bell’s theorem still reverberates Physicist John Bell at CERN, Europe’s particle-physics lab near Geneva, Switzerland, in 1982. In 1964, Northern Irish physicist John Bell proved mathematically that certain quantum correlations, unlike all other correlations in the Universe, cannot arise from any local cause1. This theorem has become central to both metaphysics and quantum information science. Exhibits Collection If your habits resemble those of average Americans, you generate about 4.6 pounds of solid trash per day. This adds up to big trouble for the environment. Americans are generating waste products faster than nature can break them down and using up resources faster than they can be replaced. How can we find ways to meet our current economic and social needs without compromising the ability of our children, and our children's children, to do the same? Our success will depend on understanding the difference between

How do you animate a thing like cosmic rays? The story behind a TEDxCERN TED-Ed lesson Cosmic rays. Active galactic nuclei. Nucleosynthesis. For physicist Veronica Bindi, this is the vocabulary of the everyday. A ten-year collaborator with AMS-02 — an experiment analyzing the data coming in from the Alpha Magnetic Spectrometer, a particle detector mounted on the International Space Station — Bindi deals with dark matter, solar activity, and the ins-and-outs of flight particle detectors with ease. index Australopithecus deyiremeda is the name of the new fossil hominid species discovered in the site of Woranso-Mille —in the central region of Afar, in Ethiopia. The discovery, described in the international scientific journal Nature, takes to another level the on-going debate on early hominid origin and evolution in Africa. The scientific team lead by Professor Haile-Selassie has found several fossil remains (upper and lower jaws and a collection of teeth) in the sites of Burtele and Wayteleyta, in Woranso-Mille, in the central region of Afar, about 50 kilometres north of Hadar and 520 kilometres northeast of the capital Addis Ababa. Experts have assigned these 3.3 – 3.5 million-year-old fossil specimens to the new species Australopithecus deyiremeda. Lucy was not the only australopithecus in the Afar region

Experiment confirms quantum theory weirdness The bizarre nature of reality as laid out by quantum theory has survived another test, with scientists performing a famous experiment and proving that reality does not exist until it is measured. Physicists at The Australian National University (ANU) have conducted John Wheeler's delayed-choice thought experiment, which involves a moving object that is given the choice to act like a particle or a wave. Wheeler's experiment then asks -- at which point does the object decide? Common sense says the object is either wave-like or particle-like, independent of how we measure it. 4 Practical Philosophies That Will Empower You Philosophy is a fascinating branch of wisdom. However these esoteric ideas are sometimes difficult to translate into practical application. What are all of those thoughts, suppositions and theories actually good for? How can an understanding of philosophy ultimately help you lead a better life? Today I want to examine with you four philosophical ideas that have influenced my life in a very positive way.

Particles and waves: The central mystery of quantum mechanics - Chad Orzel While the story in the video starts around 1900, the question of whether light is a particle or a wave is much older, dating back to the 1600’s. Isaac Newton put forth a particle model of light as a stream of “corpuscles,” while the Dutch physicist Christiaan Huygens preferred a model of light as a wave. The question was thought to have been settled in 1800 by Thomas Young, who provided a definitive demonstration of wave behavior when light encounters a pair of small slits, an experiment.You can see this dramatized in this Veritasium video. You can also simulate the behavior of waves using a large number of Java applets collected here. Give it a try! Young’s experiments and subsequent work by Jean-Augustin Fresnel convinced everyone that light was a wave, and that consensus held for about a hundred years.

Quantum Bayesianism Explained by its Founder Christopher Fuchs describes physics as “a dynamic interplay between storytelling and equation writing. Neither one stands alone, not even at the end of the day.” And indeed Fuchs, a physicist at the University of Massachusetts, Boston, has a radical story to tell. The story is called QBism, and it goes something like this. The Science of “Enlivenment” and the Commons One of the more provocative talks at the Economics and the Commons Conference last week was Andreas Weber’s critique of the “bio-economics” narrative that blends social Darwinism and free market economics. Bioeconomics is the default worldview for contemporary economic thought, public policy and politics. The only problem is that, by the lights of the latest biological sciences, this narrative is wrong, seriously wrong. Worse, it is impeding the emergence of a more accurate account of natural systems and life itself. It is thwarting our ability to develop a new, more respectful relationship with nature. Weber proposes instead a new story of “enlivenment” that points to a different vision of the "more than human world" and to commons-based based ways of organizing our political economy.