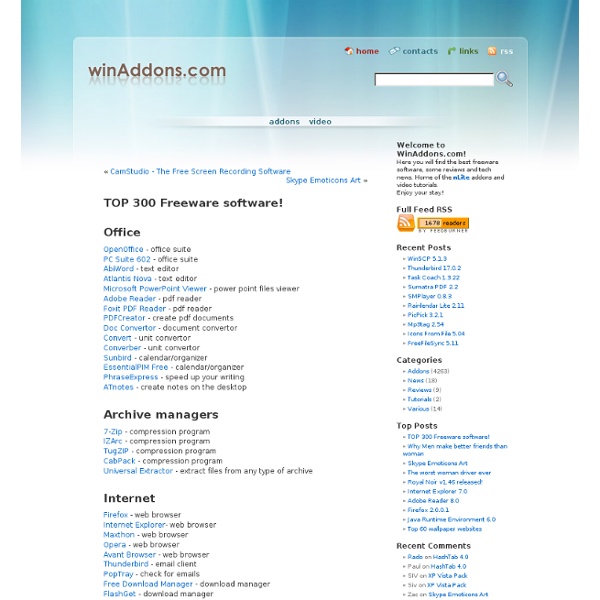 10 Search Engines to Explore the Invisible Web No, it’s not Spiderman’s latest web slinging tool but something that’s more real world. Like the World Wide Web. The Invisible Web refers to the part of the WWW that’s not indexed by the search engines. system uptime displayer MinUpTime. MinUpTime is a small freeware program that displays the time elapsed since the current Windows session started. It is designed to take up as little space as possible on the screen (although the user can choose a small, medium or large display size). The display, which can be dragged anywhere on the screen, can be set to remain on top of all windows or sit quietly in the background.

Web Filter Violation DropboxPortableAHK is a handy and reliable application that can create a portable installation of Dropbox, which you can place on a removable drive and take with you everywhere you go. It is the only program that can create a to-go version of Dropbox on today’s software market, thereby it gains exclusivity for this particular segment. The program uses Dropbox version 1.1.45, which, admittedly is an old version of the product, but there’s an explanation for this. After 1.1.45, Dropbox received an encryption feature for configuration files, which makes it impossible for third-party software to change the path of a user’s Dropbox folder. As a consequence, a portable installation cannot be created on top of a higher edition.

15 Handy Google Search Tricks Most of us use Google search to search on various topics, products, tips, etc. No doubt it’s one of the best search engines available out there. In order to search something we simply enter the keywords in the search bar and search for stuff but did you ever know that there are several built in functions within Google which makes searching stuff even easier. Some of you’ll know about them. But well if you don’t, then here they are: Miscellaneous utilities: Windows Media Player Launcher, Tiny Image Viewer - AMPsoft AMP Desktop Capturer 1.00 Description AMP Desktop Capturer is a small command-line utility that captures the desktop and saves it as a JPEG file (you can use it from a batch file or from another program).

The definitive glossary of hacking terminology We live in an era of unprecedented cyberattacks, where malicious campaigns, both personal and governmental, are carried out across laptops and wireless networks. Even if you are not technically minded, your day-to-day life is still probably pretty crowded with stories about hacking, whether you recognize them as such or not. Have you ever installed an antivirus tool on your computer? Read a story about WikiLeaks or the Arab Spring? Opened a bank account? Then hacking is important to you, even if remains largely in the background of your life. UPDATED – Using Googles Full Capabilities « XBOX, XBOX 360, PS2, PS3, PSP, & MORE! – Your source for the latest in console modding. Here is an updated version of the ‘Using Google’s Full Capabilities’. This is basically a master list found on a Russian hacking website. To save you the dangers of going there, we’ve compiled it here. Enjoy.

27 People Share The One Cool Internet Or Computer Trick They Know 1. A shortcut to any website. Whatever you type into the URL bar can be surrounded by www. & .com by pressing control + enter. 2. DrivePurge - System and Drive Cleanup Tool DrivePurge is a freeware application for for system and drive cleanup. The most important features are: DrivePurge seeks and removes unneccessary files and user tracks of more than 750 applications and system components.