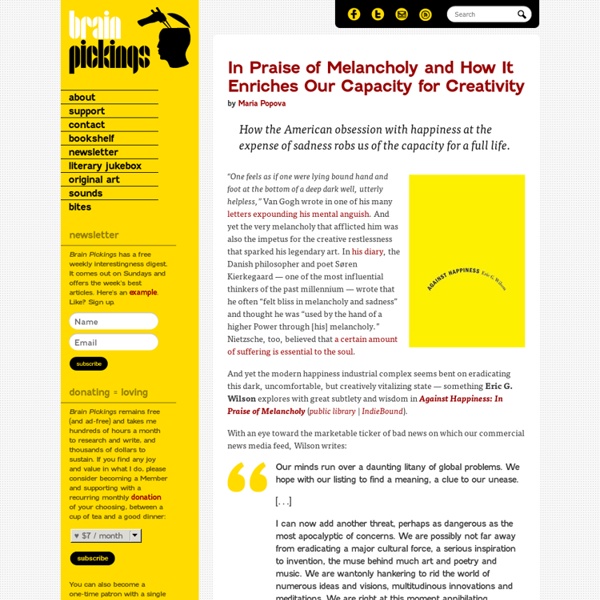 by Maria Popova How the American obsession with happiness at the expense of sadness robs us of the capacity for a full life. “One feels as if one were lying bound hand and foot at the bottom of a deep dark well, utterly helpless,” Van Gogh wrote in one of his many letters expounding his mental anguish. And yet the modern happiness industrial complex seems bent on eradicating this dark, uncomfortable, but creatively vitalizing state — something Eric G. With an eye toward the marketable ticker of bad news on which our commercial news media feed, Wilson writes: Our minds run over a daunting litany of global problems. Considering what lies behind our desire to eradicate sadness from our lives, Wilson admonishes that our obsession with happiness — something he considers a decidedly American export — “could well lead to a sudden extinction of the creative impulse.” To be clear, I myself am deeply opposed to the Tortured Genius myth of creativity. Donating = Loving Share on Tumblr Related:  Articoli • articles • Optimism

Leonardo’s Brain: What a Posthumous Brain Scan Six Centuries Later Reveals about the Source of Da Vinci’s Creativity by Maria Popova How the most creative human who ever lived was able to access a different state of consciousness. One September day in 2008, Leonard Shlain found himself having trouble buttoning his shirt with his right hand. Shlain finished the book on May 3, 2009. Illustration by Ralph Steadman from 'I, Leonardo.' Noting that “a writer is always refining his ideas,” Shlain points out that the book is a synthesis of his three previous books, and an effort to live up to Kafka’s famous proclamation that “a book must be the axe for the frozen sea inside us.” To understand Leonardo’s brain, Shlain points out as he proves himself once again the great poet of the scientific spirit, we must first understand our own: The human brain remains among the last few stubborn redoubts to yield its secrets to the experimental method. The divergent flow of art and science in the historical record provides evidence of a distinct compartmentalization of genius. Shlain writes: Donating = Loving Share on Tumblr

The Secret to Creativity, Intelligence, and Scientific Thinking: Being Able to Make Connections - When we shared this image from the @buffer Twitter account a while back, it got me thinking. The Tweet resulted in over 1,000 retweets, which seems like an indication that it resonated with a lot of people. There’s a key difference between knowledge and experience and it’s best described like this: The original is from cartoonist Hugh MacLeod, who came up with such a brilliant way to express a concept that’s often not that easy to grasp. The image makes a clear point—that knowledge alone is not useful unless we can make connections between what we know. Whether you use the terms “knowledge” and “experience” to explain the difference or not, the concept itself is sound. Lots of great writers, artists and scientists have talked about the importance of collecting ideas and bits of knowledge from the world around us, and making connections between those dots to fuel creative thinking and new ideas. Intelligence and connections: why your brain needs to communicate well with itself 1. 2. 3. P.S.

Stop Being So Positive - Gabriele Oettingen by Gabriele Oettingen | 9:27 AM October 27, 2014 We’ve all heard a great deal about the power of positive thinking. Organizations encourage it among their employees in an effort to boost performance and engagement, and it’s a key tenet of “managing yourself” well; affirmative messages about perseverance, resilience, and vision adorn many an office wall. In the wake of the Great Recession, some businesses even hired happiness coaches to get their workers looking on the bright side. “Okay,” you might say, “Forget positive thinking. What does help is mental contrasting, an exercise that brings together our positive fantasy about the future with a visualization of the obstacle standing in the way. In our research, we’ve developed a mental contrasting tool called WOOP — Wish, Outcome, Obstacle, Plan. WOOP is simple, easy, and inexpensive — so much so that you might not think it would work. Why does it work? Although positive thinking feels good in the moment, it often bears a false promise.

Why “Psychological Androgyny” Is Essential for Creativity by Maria Popova “Creative individuals are more likely to have not only the strengths of their own gender but those of the other one, too.” Despite the immense canon of research on creativity — including its four stages, the cognitive science of the ideal creative routine, the role of memory, and the relationship between creativity and mental illness — very little has focused on one of life’s few givens that equally few of us can escape: gender and the genderedness of the mind. In Creativity: The Psychology of Discovery and Invention (public library) — one of the most important, insightful, and influential books on creativity ever written — pioneering psychologist Mihaly Csikszentmihalyi examines a curious, under-appreciated yet crucial aspect of the creative mindset: a predisposition to psychological androgyny. Illustration by Yang Liu from 'Man Meets Woman,' a pictogram critique of gender stereotypes. Illustration from the 1970 satirical book 'I’m Glad I’m a Boy! Donating = Loving

What Ever Happened to the Pepsi Generation? | In the CEO Afterlife The concept of a Pepsi advertising campaign designed to capture America’s youth had its roots in the 1960’s. But it wasn’t until the 1980’s that “The Choice of a New Generation” struck 14-24 year olds like a social tsunami. Michael Jackson, the theme to “Billie Jean” and a phenomenal blend of marketing and entertainment drove the Pepsi brand to the pinnacle of contemporary culture. Coca-Cola was so taken aback by the success that they made a colossal error in judgment. They abandoned their century-old recipe and launched “New Coke”. Pundits attribute Coca-Cola’s rebound to the reintroduction of Coke Classic and better marketing and advertising. Make no mistake; the Pepsi-Cola brand is still big business. Did you like this?

This Personality Type Is Linked to Success and Happiness Are you a "glass half-full" or a "glass half-empty" kind of person? As it turns out, some people can be both. So-called realistic optimists combine the positive outlook of optimists with the clear-eyed perspective of pessimists, new research has found. These realistic optimists may get the best of both worlds, using their realism to perform better at work and elsewhere, but aren't getting bogged down by unhappiness, said Sophia Chou, an organizational psychology researcher at National Taiwan University, who presented her findings at a meeting of the American Psychological Association in Honolulu, Hawaii earlier this month. [7 Things That Will Make You Happy] Optimists and pessimists Past research has shown that optimists value thoughts that make them feel good about themselves, whereas pessimists prize a more truthful vision of themselves. Optimists tend to live longer and be healthier overall. Realistic views The optimists sorted into two camps: the realists and the idealists.

Why ‘Slacktivism’ Matters The following piece is a guest post. Read more about MediaShift guest posts here. We all have at least one social or political issue that gets our blood boiling. The question is whether it boils vigorously enough to incite action. Of course, the majority of us vent our frustrations about these issues at the water cooler and on social media, rather than marching in the streets. In April of 2014, hundreds of girls in Nigeria were kidnapped from their school by the militant group, Boko Haram. While the idea that a single post on social media could have an iota of impact on a global issue might sound absurd, it can actually be the catalyst for a successful awareness campaign given the right set of circumstances. SLACKTIVISM vs. There are two types of online activists: people whose efforts end with clicking the “share” button, and those who are willing to take further steps to delve deeply into a cause. Enacting real change on the issues that get our blood boiling requires making an effort.