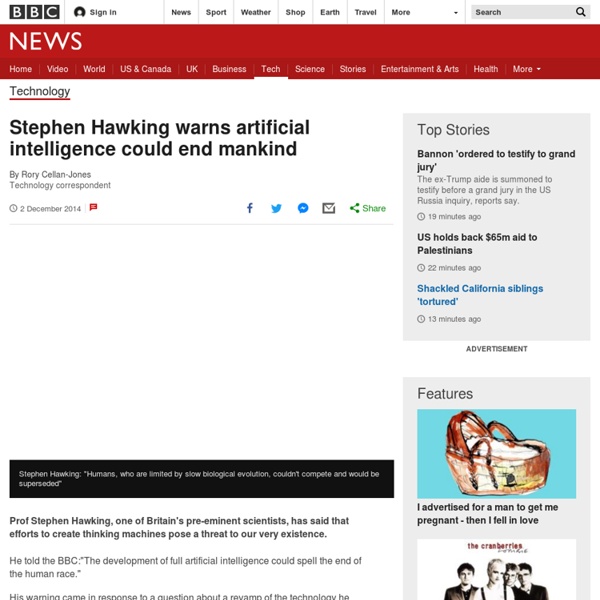 Prof Stephen Hawking, one of Britain's pre-eminent scientists, has said that efforts to create thinking machines pose a threat to our very existence. He told the BBC:"The development of full artificial intelligence could spell the end of the human race." His warning came in response to a question about a revamp of the technology he uses to communicate, which involves a basic form of AI. But others are less gloomy about AI's prospects. The theoretical physicist, who has the motor neurone disease amyotrophic lateral sclerosis (ALS), is using a new system developed by Intel to speak. Machine learning experts from the British company Swiftkey were also involved in its creation. Prof Hawking says the primitive forms of artificial intelligence developed so far have already proved very useful, but he fears the consequences of creating something that can match or surpass humans. Image copyright ALAMY "It would take off on its own, and re-design itself at an ever increasing rate," he said.

Related:  augmented humans - the singularity • Light and energy • A set of resources for Web 3.0 and Instant Gratification • AI Bot

Warning: Cybotopia Ahead by 2030 A cybotopia would be a world in which cyborgs and AI machines and systems dominate and rule over “unenhanced” humans, turning human beings as we know them today into a sub-species, or lower-order being. A dystopia, transliterated from Greek roots of this word, is a “not good place”. It’s a society which is profoundly dysfunctional by the standards of human civilization. When mathematical genius John von Neumann wrote his prescient final work The Computer and the Brain in 1956, he laid the theoretical framework for one day connecting the neural system of the brain directly to the digital networks of computers. He described how the brain and the computer are powerful computing machines, or automata, which share many characteristics and processes.

Time Always Marches Forward “Time is what keeps everything from happening at once,” wrote Ray Cummings in his 1922 science fiction novel “The Girl in the Golden Atom,” which sums up time’s function quite nicely. But how does time stop everything from happening at once? What mechanism drives time forward, but not backward? "Moving from Education 1.0 Through Education 2.0 Towards Education 3.0" by Jackie Gerstein Abstract This article compares the developments of the Internet and the Web with those of education. The web influences people's way of thinking, doing and being, and people influence the development and content of the web.

Is Stephen Hawking Right? Could AI Lead To The End Of Humankind? The famous theoretical physicist, Stephen Hawking, has revived the debate on whether our search for improved artificial intelligence will one day lead to thinking machines that will take over from us. The British scientist made the claim during a wide-ranging interview with the BBC. Hawking has the motor neurone disease, amyotrophic lateral sclerosis (ALS), and the interview touched on new technology he is using to help him communicate. It works by modelling his previous word usage to predict what words he will use next, similar to predictive texting available on many smart phone devices. But Professor Hawking also mentioned his concern over the development of machines that might surpass us.

#24: Cosmic Beings: Transhumanist Deism in Ted Chu’s Cosmic View In Human Purpose and Transhuman Potential: A Cosmic Vision for Our Future Evolution, IEET affiliate scholar Ted Chu, a professor of Economics at New York University in Abu Dhabi and former chief economist for General Motors and the Abu Dhabi Investment Authority, argues that post-humanity is a logical and necessary evolutionary next step for humanity, and we need a new, heroic cosmic faith for the post-human era. “The ultimate meaning of our lives rests not in our personal happiness but in our contribution to cosmic evolution,” says Chu… According to IEET readers, what were the most stimulating stories of 2014? This month we’re answering that question by posting a countdown of the top 31 articles published this year on our blog (out of more than 1,000), based on how many total hits each one received.

Stanford to host 100-year study on artificial intelligence Stanford University has invited leading thinkers from several institutions to begin a 100-year effort to study and anticipate how the effects of artificial intelligence on every aspect of how people work, live, and play. This effort, called the One Hundred Year Study on Artificial Intelligence (AI100) is the brainchild of computer scientist and Stanford alumnus Eric Horvitz. As former president of the Association for the Advancement of Artificial Intelligence, he convened a conference in 2009 at which top researchers considered advances in AI and its influences on people and society. Now, together with Russ Altman, a professor of bioengineering and computer science at Stanford, Horvitz has formed a committee that will select a panel to begin a series of periodic studies on how AI will affect automation, national security, psychology, ethics, law, privacy, democracy and other issues. Five leading academicians with diverse interests will join Horvitz and Altman in launching this effort:

Short steps to the Singularity? Okay, then. As we launch into a new year… possibly the first "real" year of a new century... it seems that a theme will be deification or bust! Either we build up enough momentum to attain godlike powers - in sane and wise ways - or we fall short and crumble into a morass of unsolved problems and stifling dogmas. Oh… but don't forget the "sane and wise" part! Grover’s Quantum Search Algorithm Grover’s Quantum Search Algorithm Grover’s algorithm is a quantum search algorithm that runs quadratically faster than any equivalent classical algorithm. With a budget of a million operations, a classical algorithm is limited to searching through about a million (unsorted, unstructured) possibilities. Grover’s algorithm, on the other hand, can use those million operations to search through hundreds of billions of possibilities. Describing how Grover’s algorithm pulls this trick is difficult, because it uses concepts fundamental to quantum mechanics.

With the development of Web 3.0 into the web that learns with us, I was interested in whether the advancements of the web could be linked to artificial intelligence (AI). I discussed the Web 3.0 and semantic searching with a colleague at school, and we progressed onto talking about the AI and how Steven Hawkings had warned against AI. I found this article and documentary posted at the BBC website and thought it would be interesting to share. by mrsj16 Aug 24