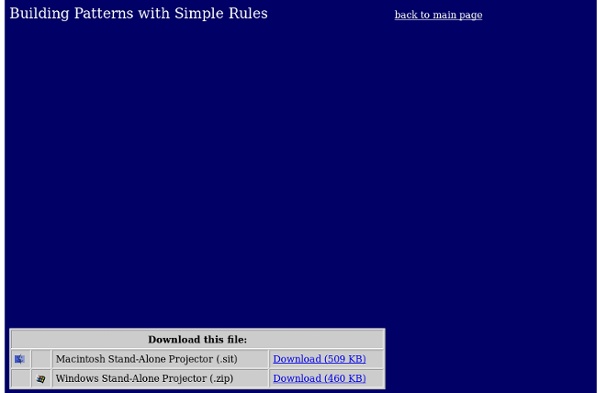 Complexity, Artificial Life and Self-Organising Systems Glossary In this glossary each entry is an hypertext link that takes you to an introduction describing that concept in a wider context. Alternatively, to read all the introductions in sequence start with "Setting The Scene". This is a brief glossary, for a more detailed one see: ISAAC's. Some of the terms included here are specific to the wider CALResCo viewpoint and may not be common in the work of other more specialised groups. Adaptability The ability of an organism to learn in response to changes in its environment over the course of its lifetime. Adaptation The ability of a species to change in response to changes in its environment over many generations. Agents Individuals within an interacting population, each may have only limited freedom to react to their neighbours yet the behaviour of the whole (emergent) may be much more complex. Aggregate ALife Attractor A point to which a system tends to move, a goal, either deliberate or constrained by system parameters (laws). Arms Race Autocatalysis

Maze Design We've been working on producing mazes by computer, with input from a human designer. We're interested in two complementary questions with respect to maze design: Complexity: What makes a maze difficult to solve? The more we consider this question, the more elusive it becomes. Gallery We have addressed these two aspects of maze design in separate sub-projects. We then studied maze design as a problem in non-photorealistic rendering. Clicking on the examples below will link you to a very high-res PNG. Papers Other resources Karan Singh has put together an excellent page about maze and labyrinth design, motivated by his NPAR 2006 paper on labyrinths. Mazes can be used to represent images in a couple of different ways. Thank you to Ronald Koster and Claudio Pozas for the use of the source images for the snails and minotaur mazes. All images are copyright 2005 by Jie Xu and Craig S.

10 Useful Web Apps for Designers DesignWoop welcomes this guest post by Tomas Laurinavicius. Since the iPhone and iPad entered the market you can hear lots of news about apps for these devices. Tons of apps available today and you can find everything you want. But today I would like to share 10 handy web-based apps for designers. To use these apps you don’t need to buy an iPhone or iPad, you can use them without any additional software or device, you just need a web browser. Invoice Bubble Invoice Bubble is free invoice software that lets you create an invoice and send to your client in seconds. Gridulator Tell Gridulator your layout width and the number of columns you want, and it’ll spit back all the possible grids that have nice, round integers. Browize Useful tool for resizing current browser window size to set or custom resolutions. Screenr Screenr is a web-based tool that lets you create screencasts without installing any software. Launchlist Kuler Favigen Easily generate favicon for your website. Fillerati Loads.in

Leader Following steering behavior - Aurora In this demonstration a group of ten vehicles exhibit leader following behavior. Click with your mouse anywhere in the yellow window to toggle between two modes. In one case, they are colored green and all follow the single gray leader. In the other case they are colored cyan and follow one another, forming a "single file" procession, much like a family of ducklings following their mother. A single gray leader vehicle employs an unrelated ad hoc behavior combining seeking randomly selected locations, wandering, and selecting between fast and slow movement. It is oblivious to the other vehicles. The leader following behavior combines separation (a desire to avoid crowding) and arrival (a desire to move towards a point, slowing as it draws near). In this diagram, a vehicle's velocity vector is shown in magenta, and its steering force vector in blue. FromSteering Behaviors for Autonomous Characters

Thinking Unconventionally A Letter from a College Professor Some time ago I received a call from a colleague, who asked if I would be the referee on the grading of an examination question. He was about to give a student a zero for his answer to a physics question, while the student claimed he should receive a perfect score and would if the system were not set up against the student. The instructor and the student agreed to an impartial arbiter, and I was selected. I went to my colleague's office and read the examination question: "Show how it is possible to determine the height of a tall building with the aid of a barometer." The student had answered: "Take the barometer to the top of the building, attach a long rope to it, lower it to the street, and then bring it up, measuring the length of the rope. I pointed out that the student really had a strong case for full credit since he had really answered the question completely and correctly. At this point, I asked my colleague if he would give up. "Of course.

comic tools Ant colony optimization algorithms Ant behavior was the inspiration for the metaheuristic optimization technique This algorithm is a member of the ant colony algorithms family, in swarm intelligence methods, and it constitutes some metaheuristic optimizations. Initially proposed by Marco Dorigo in 1992 in his PhD thesis,[1][2] the first algorithm was aiming to search for an optimal path in a graph, based on the behavior of ants seeking a path between their colony and a source of food. The original idea has since diversified to solve a wider class of numerical problems, and as a result, several problems have emerged, drawing on various aspects of the behavior of ants. Overview[edit] Summary[edit] In the natural world, ants (initially) wander randomly, and upon finding food return to their colony while laying down pheromone trails. Over time, however, the pheromone trail starts to evaporate, thus reducing its attractive strength. Common extensions[edit] Here are some of most popular variations of ACO Algorithms. to state where to