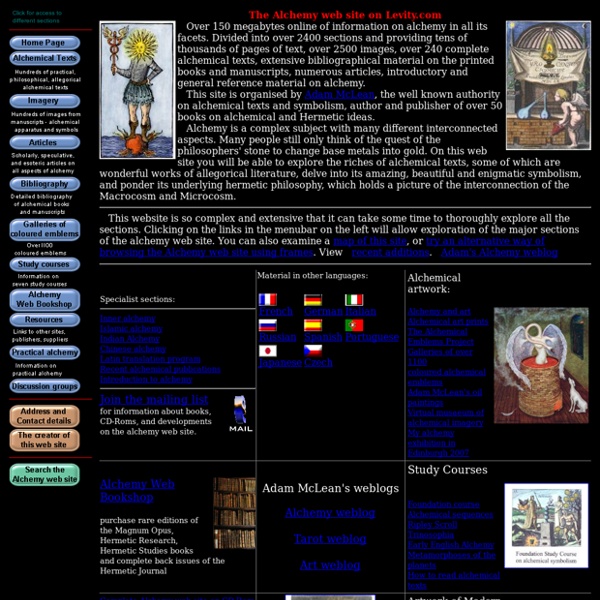 Cabala mineralis manuscript The Alchemy web site on Levity.com The mine of our mercury is our saltpetre not that of the vulgar. Our sharp bitter vitriol is not that of the vulgar Our ammoniac is not that of the vulgar The sprout of Mercury. Our mercury. Two to more than three parts of our mercury dissolve one part of the common moon or sun, and they become inseparably one spongeous porous body, which is called our moon or sun, not the common. The sophic calcination of the sun. The sophic putrefaction. The Germination of vegetation. The white sulphur. Volatilisation through liquid. Volatilisation through dryness. The red sulphur. Another fermenation, the Imbibition of the stone. The stone of the wise. Let the eternal God be praised and may his grace be unceasing. The Second Book The Rotation of the Elements (c) 1995, John Opsopaus When thou hast made the quadrangle round, Then is all the secret found. -- George Ripley (d. 1490) The rotation of the elements is a key alchemical procedure, the principal means by which the purified essence of a substance is extracted and raised to its most sublime state. Indeed, the rotation symbolizes an important transformative process, which manifests throughout the spiritual and material worlds, but to understand it we must review the symbolic structure of the four elements. The elements have been rich symbols for at least 2500 years, for they resonate with our deepest experience of the world. Now hear the fourfold roots of everything: Enlivening Hera, Hades, shining Zeus And Nestis, moistening mortal springs with tears. Hera rules the fruitful earth, Hades the central fire, Zeus the luminescent air, and Nestis the mollifying water The rotation of the elements depends on two interrelated structures, one linear and the other cyclic. Square of Opposition Phanes

Free forum : OPPT Court Cases Greek diacritics Greek orthography has used a variety of diacritics starting in the Hellenistic period. The complex polytonic orthography notates Ancient Greek phonology. The simple monotonic orthography, introduced in 1982, corresponds to Modern Greek phonology, and requires only two diacritics. Polytonic orthography (πολύς "much", "many", τόνος "accent") is the standard system for Ancient Greek. The acute accent ( ´ ), the grave accent ( ` ), and the circumflex ( ͂ ) indicate different kinds of pitch accent. The rough breathing ( ῾ ) indicates the presence of an /h/ sound before a letter, while the smooth breathing ( ᾿ ) indicates the absence of /h/. History[edit] The Lord's Prayer in a 4th-century uncial manuscript Codex Sinaiticus, before the adoption of minuscule polytonic. The original Greek alphabet did not have any diacritics. Introduction of breathings[edit] An example of polytonic text from a Byzantine manuscript, of 1020 AD, displaying the beginning of the Gospel of Luke (1:3-6) Description[edit]

Gnostic Radio About Gnostic Radio Gnostic Radio broadcasts lectures about spirituality, psychology, philosophy, science, art, gnosis, religion, kabbalah, the Bible, Buddhism, Hinduism, Greek myth, Runes, astrology, alchemy, meditation, the Zohar, Tantra, Alchemy, sacred sexuality, and much more. Gnostic Radio is a free public service produced by Glorian Publishing, a non-profit organization, and made possible by the donations of those who have recognized the value of these teachings and who wanted to share them with you. Support Gnostic Radio: Donate About the Instructors The instructors who teach the lectures here are volunteers from a wide variety of backgrounds. Live Lectures For almost ten years, Gnostic Radio broadcast live lectures every week. Speaking of retreats, we receive many requests from listeners who want to attend a lecture in person.

AMERICAN KABUKI Symbols and their meaning Introduction: Occult symbols are fast replacing Christian symbols in our culture. Therefore, we encourage you to use this list to warn others, especially Christian children who intentionally wear and display them because they are popular. Keep in mind that many of these symbols have double or multiple meanings. For example, the pentagram has been used to transmit occult power in all kinds of rituals for centuries, but to Christians the same shape may simply represent a star -- a special part of God's creation. Warning Concerning Symbols In the world of the occult, many symbols are imbued with power by the magician working in conjunction with the demonic spirit world. You may want to read Popular Occultism and study the following Scriptures: 1 Corinthians 10:18-22; 2 Corinthians 6:14; Deuteronomy 4:15-24; Deuteronomy 32:16-19; 2 Thessalonians 2:7-12 Endnotes: 1.

Internet Sacred Text Archive Home The 72 Names of God | The Kabbalah Centre The ancient Kabbalist Rav Shimon bar Yochai wrote in the Zohar that it was Moses, not God, who parted the Red Sea, allowing the Israelites to narrowly escape Pharaoh and the Egyptian army. In order to accomplish this miracle, Moses combined the power of certainty with a very powerful spiritual technology. He had possession of a formula that literally gave him access to the subatomic realm of nature. The formula Moses used to overcome the laws of nature has been hidden in the Zohar for 2000 years. This formula is called the 72 Names of God. Though this formula is encoded in the literal Biblical story of the parting of the Red Sea, no rabbi, scholar, or priest was aware of the secret. To learn how to wield the power of the 72 Names, together with the purposes of which they can be used, we recommend reading The 72 Names of God: Technology of the Soul. The 72 Names are each 3-letter sequences that act like an index to specific, spiritual frequencies.

The Crown of Life: The Path of Yoga in Theory and Practice continued ... The Crown of Life CHAPTER TWOcontinued ... He who knows prana, knows the Vedas. - SANTIS Before dealing with pranayam, it is necessary to know what the pranas (the vital airs) are, their classification and functions, etc., in the body and how they act and the things allied with them. He who conquers the mind, conquers the world. The motor power behind the mind-stuff, as said already, is that of prana and hence the regulation and control of prana, the primal force in the Universe, is of prime importance and far above other psycho-physical disciplines. (a) Prana is concerned with the respiratory system. Besides these primary pranas, there are five other kinds of lesser importance, namely: (i) Naga which helps belching or eructation. These vital airs pervade the skin, bones, muscles, tendons, ligaments and the like. Plexuses and chakras Wherever several nerves, arteries or veins interlace each other, that point or center is called a plexus. Pranayam: Elementary exercises Pranic discipline

Internet History Sourcebooks 1. This project is both very large and fairly old in Internet terms. At the time it was instigated (1996), it was not clear that web sites [and the documents made available there] would often turn out to be transient. 2. 3. The Internet Medieval Sourcebook is organized as three main index pages, with a number of supplementary documents. INTRODUCTION: MEDIEVAL SOURCES ON THE INTERNET Historians teaching medieval history surveys almost always want to combine a textbook, a sourcebook, and additional readings. GOAL: The goal here then has been to construct an Internet Medieval Sourcebook from available public domain and copy-permitted texts. DOCUMENT SIZE: The size of documents for teaching purposes is an issue. TEXTS Since these texts come from a variety of printed materials, translators, and sources, they will vary in quality. USAGE: This Sourcebook is specifically designed for teachers to use in teaching. By pointing students to this web site. Patrick J. © This text is copyright.

12-1 (2006): The Alchemist in Fiction: The Master Narrative Roslynn Haynes* Abstract: In Western culture, as expressed in fiction and film, the master narrative concerning science and the pursuit of knowledge perpetuates the archetype of the alchemist/scientist as sinister, dangerous, and possibly mad. Like all myths this story may appear simplistic but its recurrence suggests that it embodies complex ideas and suppressed desires and fears that each generation must work through. This paper explores some of the most influential examples of such characterization, links them to contemporary correlatives of the basic promises of alchemy and suggests reasons for the continuing power of such images. Keywords: alchemists in fiction, Frankenstein, Faust, characters, narratives. 1. The most widely known creation myth of modern times is not that of Genesis or Darwin but Frankenstein. The origins and trappings of this potent story lie in the precursor of chemistry, alchemy. 2. (a) The notion that all things are interchangeable and exist in a state of flux.

Web Gallery of Art previous | next