What Airbnb Gets About Culture that Uber Doesn’t - HBR 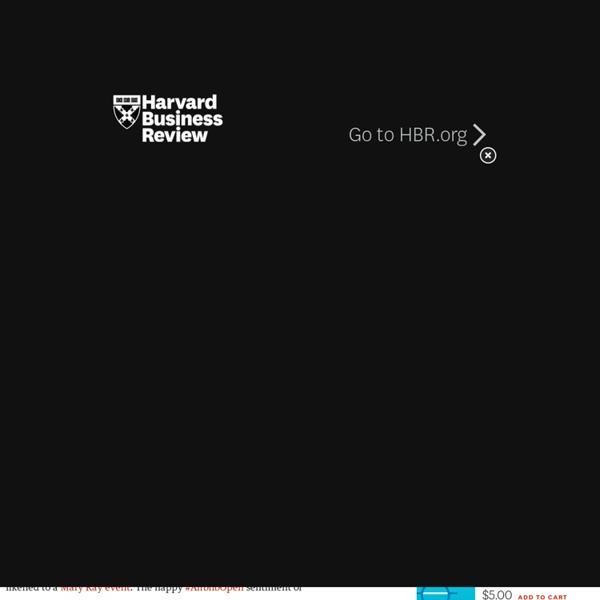 Last week, as Uber battled a media firestorm after a senior executive talked of investigating unfriendly journalists and a company manager actually used its “God View” feature to track the comings and goings of a reporter, Airbnb welcomed more than 1,500 of its most productive providers to its first-ever host convention, an immersive celebration one expert attendee likened to a Mary Kay event. The happy #AirbnbOpen sentiment of gift-wrapped programs, food drives, and a new company logo that doubles as a swing filled my Twitter stream, painting a stark contrast to the cynicism of the dystopian #ubergate tweets. The contrast was especially striking given that Airbnb and Uber are together inventing a new organizational form: platforms that are firm-market hybrids, supplying branded service offerings without actually employing the providers or owning the assets used in provision. These two flagship platforms of the sharing economy are remarkably similar in many ways.

Now we know how many drivers Uber has — and have a better idea of what they’re making​ A woman leaves the headquarters of Uber in San Francisco. (Eric Risberg/Associated Press) The rapidly growing technology company Uber released internal data on Thursday arguing that drivers who use the app to give rides-for-hire in their personal cars are making more money as chauffeurs than professional taxi drivers do — as much as $17 an hour in the District and Los Angeles, $23 in San Francisco and $30 in New York. The Gig Economy Warning: This post touches politics. The comments will likely be incendiary and polarizing. Don’t go into the comments if you don’t want to be annoyed or irritated. Many in the tech industry are taking these comments by Hillary Clinton yesterday as an ‘attack on Uber and the tech sector': Meanwhile, many Americans are making extra money renting out a small room, designing websites, selling products they design themselves at home, or even driving their own car.

Ubernomics In trying to push its case with the public, Uber decided to share its internal data with Alan Krueger, a prominent Princeton economist and former head of President Obama's Council of Economic Advisers. (Could this be part of Uber's dividend from hiring former Obama political adviser David Plouffe?) Anyhow, Kreuger finds that Uber drivers on average earn a gross premium of $6.00 an hour over the pay of drivers of traditional cabs. (He also had some rather unsurprising findings, for example that more people are now working for Uber after it expanded the number of cities in which it operates.)

The Gig Economy Won't Last Because It's Being Sued To Death When Vilma and Greta Zenelaj came across a Craigslist job ad that promised they could make as much as $22 an hour and get paid fast, it seemed like a good deal. The Albanian sisters had moved to Santa Monica to get a foothold in the film industry, and though they had produced a few independent features, they had run out of savings before they could also make a living. Now they were desperate to pay their bills. Handy (then Handybook), the company that posted the Craigslist ad, is best known as a cleaning service. The Gig Economy: The Force That Could Save the American Worker? It’s been five years this week since the onset of the Financial Crisis and the subsequent unraveling of the U.S. economy. Yesterday we learned that the employment rate between the highest- and lowest-income families is at its widest since officials began tracking data a decade ago, reports the The Associated Press. The figures are startling: the unemployment rate for those earning less than $20,000 is now 21 percent, nearly matching the rate for all workers during the 1930s Great Depression. Amid these sobering headlines, you can’t blame American workers for despairing over their professional lives. Yet there are glimmers of hope.

Uber’s Business Model Could Change Your Work Photo As Uber has grown to become one of the world’s most valuable start-ups, its ambitions often seem limitless. But of all the ways that Uber could change the world, the most far-reaching may be found closest at hand: your office. Uber, and more broadly the app-driven labor market it represents, is at the center of what could be a sea change in work, and in how people think about their jobs. You may not be contemplating becoming an Uber driver any time soon, but the Uberization of work may soon be coming to your chosen profession. The sharing economy is a lie: Uber, Ayn Rand and the truth about tech and libertarians Horror stories about the increasingly unpopular taxi service Uber have been commonplace in recent months, but there is still much to be learned from its handling of the recent hostage drama in downtown Sydney, Australia. We’re told that we reveal our true character in moments of crisis, and apparently that’s as true for companies as it is for individuals. A number of experts have challenged the idea that the horrific explosion of violence in a Sydney café was “terrorism,” since the attacker was mentally unbalanced and acted alone. But, terror or not, the ordeal was certainly terrifying. Amid the chaos and uncertainty, the city believed itself to be under a coordinated and deadly attack. Uber had an interesting, if predictable, response to the panic and mayhem: It raised prices.

Silicon Valley's gig economy is not the future of work – it's driving down wages Like many of the other tech companies – Lyft, Zaarly, Fiverr – that have gotten bucketloads of venture capital to match underemployed people with no-commitment gigs, TaskRabbit taps into an existing need – any kind of income in an economy increasingly built on low-wage jobs or no jobs at all – and fulfils a real desire for flexibility among 21st-century workers. The company's CEO has said that TaskRabbit's goal is to "revolutionize the world's labor force". But TaskRabbit, like all the others, is just a site and an app that matches workers – "taskers", in the company's terminology – with one-off jobs that other people want done for them. In the old days – as in, a couple of weeks ago – workers would bid on jobs posted by potential clients on the TaskRabbit site, and clients would select the best bid for "outsourcing" chores like cleaning the oven, wrapping gifts or assembling Ikea furniture. Now, TaskRabbit has changed its rules. The taskers are not pleased.

Uber’s New BHAG: UberPool Uber’s New BHAG: UberPool “Can you take me Higher? To a place where blind men see Can you take me Higher? Who are the Uber Drivers? What kind of workers are driving for Uber? Jonathan V. Hall and Alan B. Krueger offer the first set of systematic answers to this question in "An Analysis of the Labor Market for Uber’s Driver-Partners in the United States," published as Working Paper #587 for the Industrial Relations Section at Princeton University (January 22, 2015). (Full disclosure: Hall is the Head of Policy Research at Uber Technologies, and Krueger was paid by Uber for his work on this study. However, Krueger's contract also specified that he had “full discretion over the content of the report.”