Languages “Lost” In Infancy Discovered In The Brain 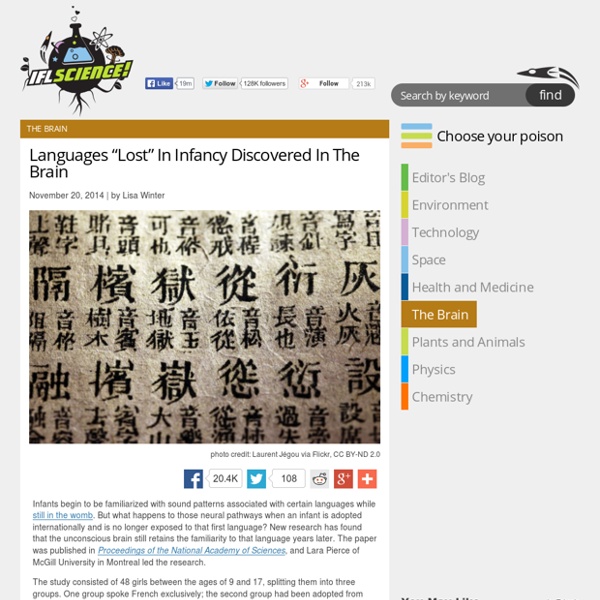 Infants begin to be familiarized with sound patterns associated with certain languages while still in the womb. But what happens to those neural pathways when an infant is adopted internationally and is no longer exposed to that first language? New research has found that the unconscious brain still retains the familiarity to that language years later. The paper was published in Proceedings of the National Academy of Sciences, and Lara Pierce of McGill University in Montreal led the research. The study consisted of 48 girls between the ages of 9 and 17, splitting them into three groups. One group spoke French exclusively; the second group had been adopted from China as babies, but only spoke French and had not continued to be exposed to Chinese; and the third group was fluent in both French and Chinese since birth. Each group underwent functional MRI, allowing researchers to see which parts of the brain were activated when the participants were exposed to Chinese language sounds. Related:  neuroscience • Language • IFL Science

The Science of Sleep: Dreaming, Depression, and How REM Sleep Regulates Negative Emotions by Maria Popova “Memory is never a precise duplicate of the original… it is a continuing act of creation. Dream images are the product of that creation.” For the past half-century, sleep researcher Rosalind D. One particularly fascinating aspect of her research deals with dreaming as a mechanism for regulating negative emotion and the relationship between REM sleep and depression: The more severe the depression, the earlier the first REM begins. But what has perplexed researchers is that when these depressed patients are awakened 5 minutes into the first REM sleep episode, they’re unable to explain what they are experiencing. Brain imaging technology has helped to shed light on this mystery. Cartwright spent nearly three decades investigating “how a mood disorder that affects cognition, motivation, and most of all the emotional state during waking shows itself in dreams.” This brings us to the regulatory purpose of dreaming. Donating = Loving Brain Pickings has a free weekly newsletter.

Does Language Influence our View of the World? We use language to describe our subjective perception of the world. If I say “I feel cold”, then I use language to describe how I feel. This is nothing new. The interesting question now is: does it also work the other way around? The idea that that the language that we use can influence the way that we think is nothing new. People organize space and time based on the language that they use. Color perception is a second example (1), which demonstrates how language can influence cognitive ability. George Orwell’s book 1984 describes the language “Newspeak” which serves as a further example of the Saphir-Whorf-Hypothesis. The question that know ask myself is, if there is no word for a particular idea or concept, does it mean that the people are not aware of the existence of this concept at all? The consequence of the Sphir-Whorf-Hypothesis is far reaching. Here is my personal collection of words which exist in the German language but are difficult to translate into English. References:

Two New Sub-Atomic Particles Discovered at CERN Two never-before-seen particles have just been detected at CERN’s Large Hadron Collider, the world’s largest particle accelerator, by the international LHCb collaboration. Known as Xi_b'- and Xi_b*-, the new particles belong to the baryon family. Baryons are made from three fundamental, subatomic particles called quarks, bound together by a strong force. And the quarks in these newly discovered baryons aren’t even the same type: Each of the new particles contains one beauty (b), one strange (s), and one down (d) quark. The new particles are more than six times as massive as a proton, thanks to their heavyweight b quarks and their angular momentum -- a particular attribute of quarks known as “spin.” “Nature was kind and gave us two particles for the price of one," says Matthew Charles of the CNRS's LPNHE laboratory at Paris VI University in a CERN statement. The existence of these particles were previously predicted in 2009, but no one has ever seen them until now.

HOW DOES OUR LANGUAGE SHAPE THE WAY WE THINK? Humans communicate with one another using a dazzling array of languages, each differing from the next in innumerable ways. Do the languages we speak shape the way we see the world, the way we think, and the way we live our lives? Do people who speak different languages think differently simply because they speak different languages? Does learning new languages change the way you think? Do polyglots think differently when speaking different languages? These questions touch on nearly all of the major controversies in the study of mind. I often start my undergraduate lectures by asking students the following question: which cognitive faculty would you most hate to lose? Most questions of whether and how language shapes thought start with the simple observation that languages differ from one another. Clearly, languages require different things of their speakers. Scholars on the other side of the debate don't find the differences in how people talk convincing. 1 S. 3 B. 4 L. 5 D. 7 L. 8 L.

Researchers Translate Ancient Egyptian Spellbook A duo of Australian researchers has deciphered an ancient Egyptian handbook that belonged to a ritual practitioner some 1,300 years ago. This “Handbook of Ritual Power,” as it has been named, was found to contain a number of spells and invocations (the act of summoning a diety) that instruct the reader how to cast love spells, exorcise evil spirits and cure various ailments, to name a few. The book is written in Coptic, an Egyptian language, and contains 20-pages of bound parchment. Handwritten books, such as this, that are made up of bound sheets of paper or similar materials are referred to as a codex. According to researchers Malcolm Choat and Iain Gardener, who describe the text in a new book, the beginning of the codex consists of a series of invocations that end with drawings or “words of power.” This then leads to various different spells which have a variety of purposes, for example curing possession or disease, or bringing about success in life. [Via Live Science]

Brain inflammation a hallmark of autism, large-scale analysis shows While many different combinations of genetic traits can cause autism, brains affected by autism share a pattern of ramped-up immune responses, an analysis of data from autopsied human brains reveals. The study, a collaborative effort between Johns Hopkins and the University of Alabama at Birmingham, included data from 72 autism and control brains. It will be published online Dec. 10 in the journal Nature Communications. “There are many different ways of getting autism, but we found that they all have the same downstream effect,” says Dan Arking, Ph.D. , an associate professor in the McKusick-Nathans Institute for Genetic Medicine at the Johns Hopkins University School of Medicine. The causes of autism, also known as autistic spectrum disorder, remain largely unknown and are a frequent research topic for geneticists and neuroscientists. Previous studies had identified autism-associated abnormalities in cells that support neurons in the brain and spinal cord.

Gaza and the language of modern war The propaganda battle in a modern war begins with its name. Israel's attack on Gaza this summer was given an official Hebrew name meaning "resolute cliff", so as to assure its victims of the futility of resistance. Only a fool would try to fight a cliff, even an irresolute one. The name in English was "Operation Protective Edge". The people fighting on either side of this "clash" or "conflict" (but rarely "war") were named in ways carefully emphasising a gulf in respectability: Israeli "soldiers" but Hamas "militants". That consequence was said rather to be the fault of Hamas, for using the people of Gaza as "human shields". Hamas told its supporters, when referring to those killed by Israeli actions, always to use the phrase "an innocent citizen", though some of those killed had actually been fighting or launching rockets at Israeli towns. The Gazan war has also expanded our taxonomy of ceasefires. All this slaughter was routinely called a "tragedy".

Information Flows In Opposite Directions During Imagination And Reality Sometimes, you can picture something so vividly in your head that it feels as though you’re actually looking at what you’re imagining. But no matter how good your imagination is, information will flow through your brain in the opposite direction compared to when you actually perceive something. That’s the conclusion of a new study, published in NeuroImage, which looked at brain activity in participants when they were either watching clips or recalling them in their heads. “A really important problem in brain research is understanding how different parts of the brain are functionally connected. For the study, scientists from the University of Wisconsin-Madison and the University of Liege examined the activity of participants’ brains using a technique called electroencephalography (EEG). They were interested in looking at the flow of information through the cortex, which is the outer layer of the brain. [Via UW-Madison and NeuroImage]

Study offers evidence of unconscious thinking impacting conscious decision making (Medical Xpress)—A trio of researchers with the University of New South Wales, has found evidence to support the notion that unconscious thinking does impact conscious thinking, without the person even knowing it. In their paper published in Proceedings of the National Academy of Sciences, Alexandra Vlassova, Chris Donkin, and Joel Pearson describe the many experiments they conducted with volunteers and why their findings are important. Psychologists (and others) have debated for a long time whether the conscious decisions people make are influenced by unconscious information. Does some part of our brain hold information that somehow has a backdoor to our conscious thought-making process, without our knowing it? Some prior research has suggested that might be the case—it might explain, for example, why people make seemingly illogical decisions sometimes. Explore further: Ever-so-slight delay improves decision-making accuracy

Counterterrorism and the English Language The New York Times is finally calling torture by its name. Why did it wait so long? Alex Torrenegra/Flickr The announcement that the New York Times will now refer to Bush Administration torture by its proper name is welcome news, tempered only by Executive Editor Dean Baquet's unfortunate attempt to rationalize the old policy. "When the first revelations emerged a decade ago, the situation was murky," he wrote. But every torturing government insists that its interrogations are not, in fact, illegal torture. All that has been known for years! Then Baquet wrote: Meanwhile, the Justice Department, under both the Bush and Obama administrations, has made clear that it will not prosecute in connection with the interrogation program. This seems perilously close to declaring that whether torture is the most accurate way to describe waterboarding depends on whether any Bush Administration officials remain in jeopardy of being prosecuted and imprisoned for it. There are other possibilities.