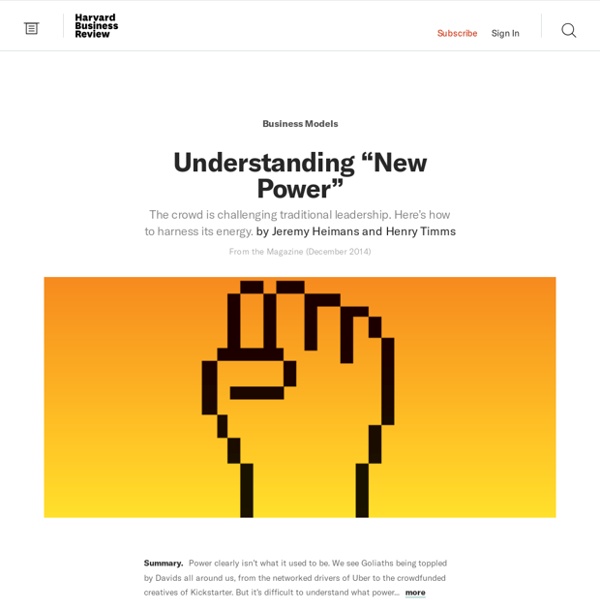 We all sense that power is shifting in the world. We see increasing political protest, a crisis in representation and governance, and upstart businesses upending traditional industries. But the nature of this shift tends to be either wildly romanticized or dangerously underestimated. There are those who cherish giddy visions of a new techno-utopia in which increased connectivity yields instant democratization and prosperity. Both views are wrong. Old power works like a currency. New power operates differently, like a current. The battle and the balancing between old and new power will be a defining feature of society and business in the coming years. New Power Models Power, as British philosopher Bertrand Russell defined it, is simply “the ability to produce intended effects.” Old power models tend to require little more than consumption. Sharing and shaping. Facebook is the classic example of a new power model based on sharing and shaping. Funding. Producing. Co-ownership. New Power Values Related:  Negocios • Uber

Uber Drivers Say They're Making Less Than Minimum Wage Pablo Blazquez Dominguez/Stringer/Getty Images Uber likes to tell the world that the median salary for UberX drivers is ~$90,000 per year in New York. Turns out that number might be a bit of an exaggeration. We spoke with more than a dozen Uber drivers to see how much money they were making, and none of the numbers they gave were even close to $90,000. In fact, a few drivers said they were struggling to even earn the minimum wage. The drivers we spoke with say they're making anywhere from $5 an hour to $20 an hour, meaning that in a year's time, if they're working 40-hour weeks, they could be making anywhere between $10,000 to $41,000. A big part of the reason drivers are struggling to hit $90,000 is that this summer Uber cut the price of an UberX ride by 20% across the country. UberX is Uber's cheapest option. For consumers, the discount was great news. The 20% discount was introduced as a short-term plan to boost demand and awareness.

This is Uber's playbook for sabotaging Lyft Uber is arming teams of independent contractors with burner phones and credit cards as part of its sophisticated effort to undermine Lyft and other competitors. Interviews with current and former contractors, along with internal documents obtained by The Verge, outline the company’s evolving methods. Using contractors it calls "brand ambassadors," Uber requests rides from Lyft and other competitors, recruits their drivers, and takes multiple precautions to avoid detection. Together, the interviews and documents show the lengths to which Uber will go to halt its rivals’ momentum. After The Verge asked Uber for comment on its report, the company stalled for time until they could write this blog post introducing Operation SLOG to the world. ‘A special ongoing project’ Earlier this month, CNN reported that Uber employees around the country ordered and then canceled 5,560 Lyft rides, according to an analysis by Lyft. "Uber is flat-out lying to their customers." Organizing a street team

What If Uber Were a Unionized, Worker-Owned Co-Op? These Denver Cabbies Are Making It Happen by Mary Hansen Wolde Gebremariam is one of more than 160,000 people nationwide who drive their own cars for Uber. Based in Denver, Gebremariam, age 28, drives his Chevy SUV for the company and occasionally works as a private limo driver. “The labor movement has to bring ownership and equity into the picture.” Uber built its $40 billion business around a mobile-based application that connects drivers with riders. Hailed by some for shaking up a stagnant taxi industry, others criticize the company for how it treats drivers, who pay for their own cars, gas, and maintenance. It’s also been criticized for dictating rates and for deactivating drivers’ accounts, essentially firing them, without warning. The ride-hailing app company may be innovative from the perspective of its customers—and its owners—but for the driver the experience is very similar to that of a traditional taxi driver, as Gebremariam can attest. That’s how he thought it would work, anyway. Gebremariam isn’t just complaining about it.