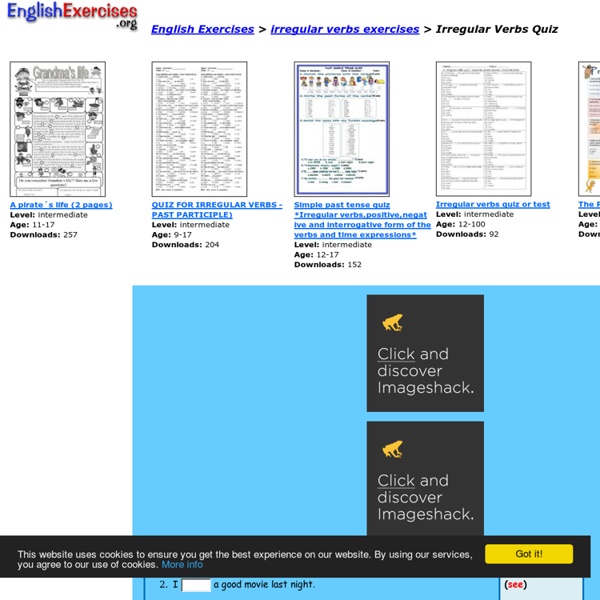 List of Roman deities A vast number of ancient Roman deities are known by name. The most familiar today are those the Romans identified with Greek counterparts (see interpretatio graeca), integrating Greek myths, iconography, and sometimes religious practices into Roman culture, including Latin literature, Roman art, and religious life as it was experienced throughout the Empire. Many of the Romans' own gods remain obscure, known only by name and function, through inscriptions and texts that are often fragmentary—particularly those who belong to the archaic religion of the Romans dating back to the era of kings, the so-called "religion of Numa," perpetuated or revived over the centuries. Some archaic deities have Italic or Etruscan counterparts, as identified both by ancient sources and by modern scholars.

Irregular verbs again I have already published several posts on irregular verbs: Past participles – divided according to the pronunciation and Present perfect tense. However, a week ago a student of mine contacted me and asked me if I could create a way for him to learn the irregular verbs. He spends a lot of time driving so he asked me to prepare something to listen to in his car. Prefixes, suffixes and affixes, word formation worksheets ESL Lesson Plans & Resources for Kids Kiz School provides: Video Tutorials, PPT, Interactive Games & Quizzes, Printable PDF Worksheets & Flashcards, among others. You don't need to be a professional teacher to use our materials.It is an effective, affordable private and public teaching solution for parents and schools.

English grammar in context Some people think that the difference between speech and writing is that people use longer words in writing. In some writing this is true, but there are also significant differences, many of which are grammatical. In this free course, English Grammar in context, you will develop knowledge and understanding of the differences between spoken and written English, factors that influence our use of grammar and vocabulary in speech and writing, and different ways in which grammar has been described.

Aztec Civilization The Aztec Empire flourished between c. 1345 and 1521 CE and, at its greatest extent, covered most of northern Mesoamerica. Aztec warriors were able to dominate their neighbouring states and permit rulers such as Motecuhzoma II to impose Aztec ideals and religion across Mexico. Highly accomplished in agriculture and trade, the last of the great Mesoamerican civilizations was also noted for its art and architecture which ranks amongst the finest ever produced on the continent. The Aztec state is actually the most well documented Mesoamerican civilization with sources including archaeology, native books (codices) and lengthy and detailed accounts from their Spanish conquerors - both by military men and Christian clergy. Historical Overview Sometime around 1100 CE the city-states or altepetl which were spread over central Mexico began to compete with each other for local resources and regional dominance.

Grammar Welcome to EnglishClub Grammar for English learners. Many of these grammar lessons also have quizzes to check your understanding. If you still don't understand something, feel free to ask a question at the Grammar Help Desk. grammar (noun): the structure and system of a language, or of languages in general, usually considered to consist of syntax and morphology. What is Grammar? Grammar hot links Verbs | Passive voice | Modal verbs | Conditionals | Questions | Irregular verbs | Going to | Gerunds | Phrasal Verbs | Tenses | Nouns | (Un)Countable nouns | Adjectives | Articles | Preposition List

Aztec Math Decoded, Reveals Woes of Ancient Tax Time April 3, 2008 Today's tax codes are complicated, but the ancient Aztecs likely shared your pain. To measure tracts of taxable land, Aztec mathematicians had to develop their own specialized arithmetic, which has only now been decoded. By reading Aztec records from the city-state of Tepetlaoztoc, a pair of scientists recently figured out the complicated equations and fractions that officials once used to determine the size of land on which tributes were paid. Two ancient codices, written from A.D. 1540 to 1544, survive from Tepetlaoztoc. They record each household and its number of members, the amount of land owned, and soil types such as stony, sandy, or "yellow earth."