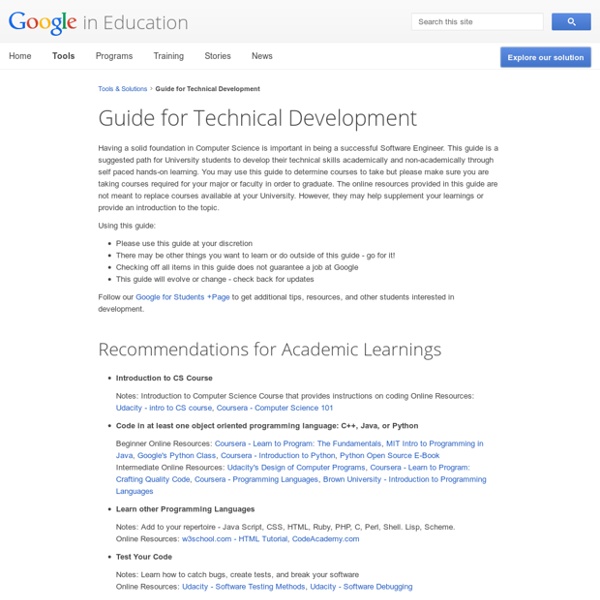 Having a solid foundation in Computer Science is important in being a successful Software Engineer. This guide is a suggested path for University students to develop their technical skills academically and non-academically through self paced hands-on learning. You may use this guide to determine courses to take but please make sure you are taking courses required for your major or faculty in order to graduate. Using this guide: Please use this guide at your discretion There may be other things you want to learn or do outside of this guide - go for it! Follow our Google for Students +Page to get additional tips, resources, and other students interested in development.

S4A Project Euler Alternative Arduino Interfaces - learn.sparkfun.com Favorited Favorite 2 ArduBlock is a programming environment designed to make “physical computing with Arduino as easy as drag-and-drop.” Instead of writing code, worrying about syntax, and (mis)placing semicolons, ArduBlock allows you to visually program with an snapped-together list of code blocks. ArduBlock builds on the simplicity of Arduino, and creates a perfect beginner gateway to physical computing. Installing ArduBlock ArduBlock is something of an “add-on” to Arduino, so it requires that you have the Arduino IDE installed. Installing ArduBlock can be a little tricky – there’s no installer, just a Java file that needs to be stored in a very specific location. Download and Install Arduino (if you haven’t already) – Ardublock is an extension of the default Arduino IDE, so you’ll need to have Arduino installed on your computer to run it. ArduBlock works hand-in-hand with the Arduino IDE – it relies on the IDE being open in the background, so don’t close the Arduino window!

Visual Programming Languages and Ardublock | Ardublock From Physical computing to visual programming Visual programming languages for their ability to introduce variety of people including non-specialists and students, to programming. With color coded operators, geometrically shaped data types, and no semicolons (!), visual languages have a unique ability to make programming a more intuitive experience. Physical Computing can be an introduction to programming, integrating the arts, engineering and computing. Why Visual Programming Language? By Physical Computing we mean the building of little systems, usually interactive, composed of sensors (like button), actuator (like led and motors) which are linked by microcontroller. How to make it possible for non-programmer to create electronics, fast. Some studied visual Programing languages Visual Programming language is the answer for these questions. Scratch For Arduino Scratch for Arduino (S4A) is a modified version of Scratch ready for communication with Arduino boards. Mindplus Minibloq Blockly