10 Movies That Could Change Your Understanding Of Life 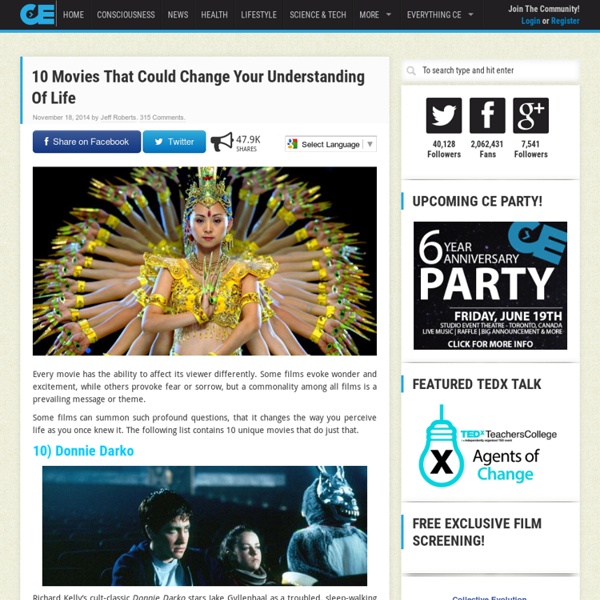 Every movie has the ability to affect its viewer differently. Some films evoke wonder and excitement, while others provoke fear or sorrow, but a commonality among all films is a prevailing message or theme. Some films can summon such profound questions, that it changes the way you perceive life as you once knew it. The following list contains 10 unique movies that do just that. 10) Donnie Darko Richard Kelly’s cult-classic Donnie Darko stars Jake Gyllenhaal as a troubled, sleep-walking teen who is insistent in challenging authority and who is often visited by Frank, a monstrous rabbit that urges Donnie to perform dangerous and destructive pranks. A haunting work of loneliness, alienation and the universal desire for companionship and meaning that’s wrapped in a guise of understated ‘80s nostalgia and head-spinning science fiction mythology, Donnie Darko is a film you shouldn’t miss. What makes Donnie Darko especially fascinating is its take on multiple realities and universes. 9) The Matrix

Top 20 Banned Movies of All Time #1 Dorlita In The Passion Dance Dorlita in the Passion Dance (1894) might have been the first film ever to be banned in the U.S. More than a decade before Hollywood studios were even operating, this short film was banned in New Jersey after it began to appear in peepshows and burlesque houses. #2 Reservoir Dogs Although it’s not discussed much in the press anymore, Quentin Tarantino’s Reservoir Dogs(1992) was so controversial in Britain that censors prevented it from being released on VHS.

Over 500 Social Change Documentaries on 1 Page Just imagine what could become possible if an entire city had seen just one of the documentaries above. Just imagine what would be possible if everyone in the country was aware of how unhealthy the mainstream media was for our future and started turning to independent sources in droves. Creating a better world really does start with an informed citizenry, and there's lots of subject matter to cover. From all the documentaries above, it's evident that our society needs a new story to belong to. The old story of empire and dominion over the earth has to be looked at in the full light of day - all of our ambient cultural stories and values that we take for granted and which remain invisible must become visible. But most of all, we need to see the promise of the alternatives - we need to be able to imagine new exciting ways that people could live, better than anything that the old paradigm could ever dream of providing.

100 Incredibly Useful and Interesting Web Sites Even as the Web has become more entertaining--and certainly better looking--over the past 15 years, it has also become much more useful and practical, as the 100 sites in this feature will demonstrate. I've organized the sites in the list by the type of task they help you with. It is not a ranking; in each category I recommend sites that specialize in a different area than the others. I've also mixed in a smattering of sites that you might not use every day, but that provide ready answers to specific questions like "How can I learn to rumba?" or "Who should I vote for?"

25 Spectacular Movies You (Probably) Haven’t Seen Pt. 3 Mr. Nobody Who would you have been when, at crucial moments in your life, you chose to walk a different path? That thought experiment is explored brilliantly by this amazing science-fiction movie as we follow Nemo(s) for 118 years. Set in the past, the now and in the future, we follow different branches of his life through time, covering the topics of technology, love, human fragility and how decisions shape who we will end up being. List of fallacies A fallacy is incorrect argument in logic and rhetoric resulting in a lack of validity, or more generally, a lack of soundness. Fallacies are either formal fallacies or informal fallacies. Formal fallacies[edit] Main article: Formal fallacy Appeal to probability – is a statement that takes something for granted because it would probably be the case (or might be the case).[2][3]Argument from fallacy – assumes that if an argument for some conclusion is fallacious, then the conclusion is false.Base rate fallacy – making a probability judgment based on conditional probabilities, without taking into account the effect of prior probabilities.[5]Conjunction fallacy – assumption that an outcome simultaneously satisfying multiple conditions is more probable than an outcome satisfying a single one of them.[6]Masked man fallacy (illicit substitution of identicals) – the substitution of identical designators in a true statement can lead to a false one. Propositional fallacies[edit]

The Big List Of Free Kindle Tools There are quite a few programs and web services that can be really useful to Kindle owners. This post compiles 17 of these that every Kindle user should know about, ranging from eBook conversion programs to services that can broadcast your favorite websites to your Kindle. Note that many of the tools listed here aren’t strictly Kindle specific, but can be very useful to anyone who has a Kindle or any other eBook reading device, such as PDF cropping tools and eBook conversion apps, etc.

82 mind-blowing movies facts you probably didn't know 1. Sean Connery wore a wig in every single one of his Bond performances. 2.