The Science of Caffeine: The World's Most Popular Drug - Reactions 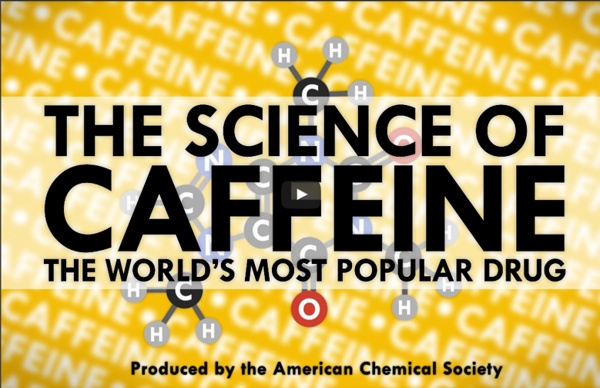 The Chemistry of Caffeine - www.ChemistryIsLife.com Chemistry's Role When you consume caffeine, a chemical reaction occurs in your brain. Caffeine uses the same biochemical mechanisms as other stimulants to stimulate the brain function.It causes increased neuronal firing. This affects everyone differently. Some may have reactions that others may not. For example some may have the jitters or insomnia. Another chemical reaction that happens is considered dependency. Background Research Caffeine is not a man made substance, it is made through plants. Resources About the Author Marisa Salazar is addicted to caffeine and drinks up to ten coffees a day.

Caffeine - Chemistry Encyclopedia - structure, reaction, water, uses, name, mass Photo by: fotogiunta Figure 1. The molecular structure of caffeine. Caffeine belongs to the family of heterocyclic compounds known as purines. It has the systematic name 3,7-dihydro-1,3,7-trimethyl-1H-purine-2,6-dione; it is also known as 1,3,7-trimethylxanthine, and 1,3,7-trimethyl-2,6-dioxopurine. More than sixty plants, including those that give us coffee, tea, cola, and cacao, produce caffeine from the purine xanthine. Caffeine enters the bloodstream about ten minutes after its ingestion and stays in the body for up to twelve hours. Caffeine acts as a stimulant of the central nervous system (CNS) through several proposed mechanisms. Coffee drinks are among the most popular sources of caffeine, believed to be the most commonly used drug worldwide. such as epinephrine and glucagon—hormones that initiate the "fight or flight" response in animals. Some investigations into caffeine-related health issues are inconclusive. "Coffee: How Much Is Too Much?" Other Resources Caffeine Archive.

Why is Coffee Bitter? – The Chemistry of Coffee Mention coffee, and caffeine is the chemical compound name that immediately springs to mind. However, whilst caffeine’s effects on the brain are well documented – it binds to adenosine receptors in the brain – it has relatively little impact when it comes to the taste of coffee. Coffee, as it turns out, is a cornucopia of chemical compounds that influence its taste; whilst some of these compounds are poorly characterised, one group of compounds about which plenty is known are the chlorogenic acids. Chlorogenic Acid These compounds account for up to 8% of the composition of unroasted coffee beans. In medium to light coffee brews, the main source of bitterness is from chlorogenic acid lactones; the two dominant members of this family of compounds in coffee are shown below. 3-caffeoylquinic-1,5-lactone & 4-caffeoylquinic-1,5-lactone In dark roasted coffees, the breakdown products of these chlorogenic acid lactones have an increasing effect on the bitterness of the flavour. Phenylindanes

Coffee chemistry: Why does your morning hit of caffeine taste so good? Whether it’s a milky latte or a double shot of espresso, coffee has become an important morning ritual for many people all over the world. Its rich taste and aroma serves as a welcoming wake-up call and the caffeine helps keep you alert for the rest of the day, but did you know this is all down to the 1,000 different chemical compounds present in every cup? Acids, alkaloids, carbohydrates and proteins, either found in raw coffee beans or produced by the roasting process, work together to create a complex mixture of fl avours and that distinctive coffee smell. What’s in your cup? ACIDS – Both organic and inorganic acids are present in coffee, the most important of which is chlorogenic acid (CGA). How is coffee decaffeinated? To make decaf coffee, companies soak green coffee beans in hot water (70-100 degrees Celsius/160-210 degrees Fahrenheit) to soften them and draw out the water-soluble caffeine molecules. For more incredible facts, make sure you pick up the latest copy of How It Works.

caffeine | C8H10N4O2 - PubChem /LABORATORY ANIMALS: Acute Exposure/ Caffeine exacerbates the acute toxicity of 3,4-methylenedioxymethamphetamine (MDMA, 'ecstasy') in rats characterized by hyperthermia, tachycardia and lethality. Depletion of central catecholamine stores and dopamine D(1) receptor blockade have been reported to attenuate the ability of caffeine to exacerbate MDMA-induced hyperthermia.The purpose of the study was to investigate whether dopamine D(1) and D(2) receptors mediate the effects of caffeine on MDMA-induced changes in body temperature, heart rate and locomotor activity. All parameters were recorded continuously in individually housed rats using bioradiotelemetry from 1 hr prior to 4 hr following caffeine (10 mg/kg, sc) and/or MDMA (10 mg/kg, sc) administration. Co-administration of caffeine with MDMA provoked a switch from MDMA-induced hypothermia and bradycardia to hyperthermia and tachycardia without influencing MDMA-induced hyperlocomotion. Tofovic SP et al; Ren Fail 29 (7): 891-902 (2007)